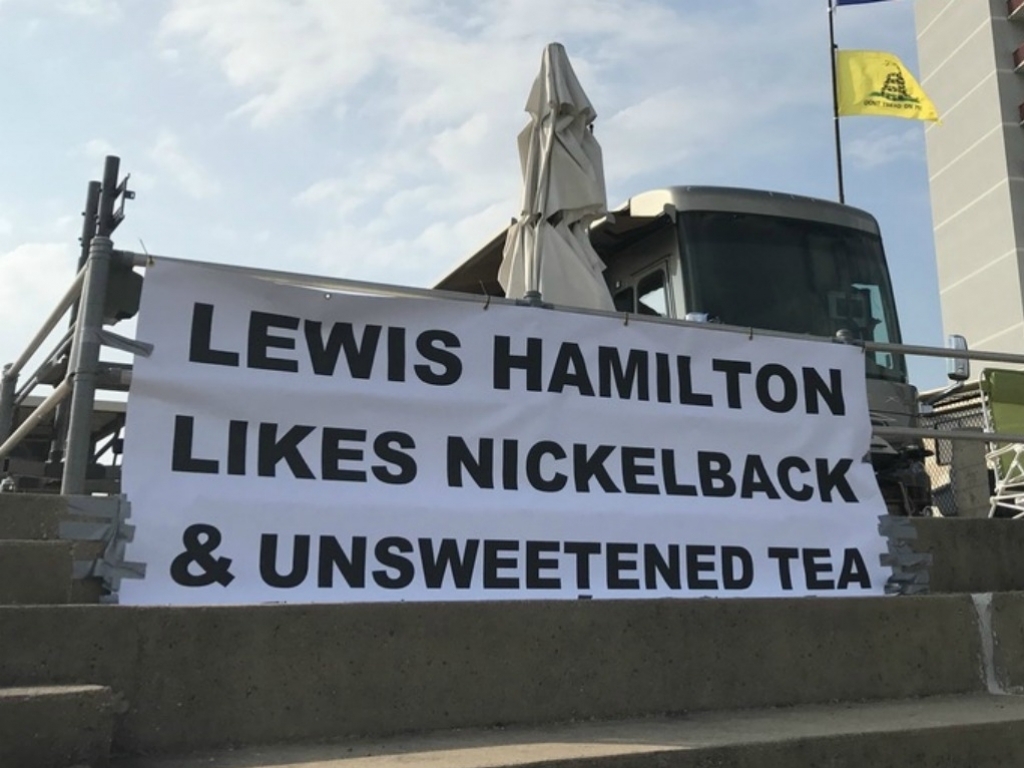 The Canadian Grand Prix weekend had pretty much everything: drama, tears, the return of the raft race and Lewis Hamilton incurring the wrath of IndyCar.

The build-up to Montreal started with Hamilton firing shots at the IndyCar series, questioning the quality of competition.

“I looked at the times and, frankly, for his first ever qualifying for Fernando to be fifth — what does that say about Indy?” the Mercedes driver told France’s L’Equipe.

If Hamilton was looking for a reaction, he certainly got one. The best zinger going to Tony Kanaan, who said:

“The guy (Hamilton) competed in a two-car world championship last year and was second, so I don’t think he can say much.”

And, if that wasn’t enough. The Indycar fans at the Texas 600 last weekend had this playful dig… 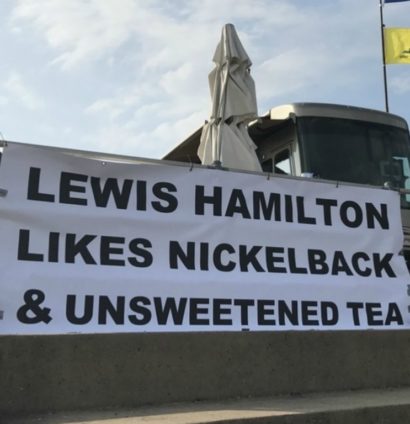 Hopefully this rumbles on. We’re really quite enjoying it.

One thing we certainly wasn’t expecting was that incredible gift from Ayrton Senna’s family to Hamilton after the Brit equalled his icon’s record of 65 pole positions.

Only Sir Patrick Stewart’s ‘shoey’ got close to rivalling this iconic moment over the weekend, but that pole position feat wasn’t the only one that Hamilton would match.

Hamilton also secured his fourth career Grand Slam – the same number as Senna – and what makes it even more impressive is that he nailed the fastest time on lap 64 after stopping for supersofts on lap 32.

But, freakiest of them all…

The 2016 Canadian Grand Prix brought us this wonderful interview between Hamilton and Sebastian Vettel, with the latter accusing his now title rival of “not braking for animals”.

And the circuit attracted plenty of wildlife this year, too, just look how concerned Seb was when he looked down to Turn 1… 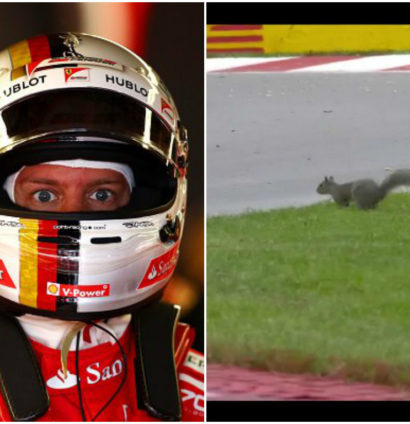 There are a lot of run-of-the-mill interviews on race weekend, but certainly not this one as Vettel was grilled on Dutch television. The hesitations are quite delightful, as is his answer to the Mark Webber question…

Man of the people

From one World Champion to another now and Canada marked the (most probably reluctant) return of Fernando Alonso to Formula 1 after his Indy 500 exploits. It pretty much went as expected… 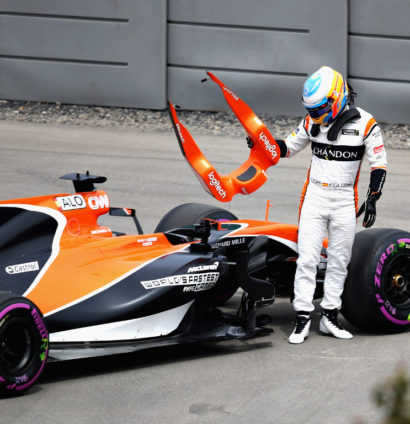 Pretty much all the focus was on Alonso in Thursday’s press conference, too, where he declared:

“If we [McLaren] are winning by September, I will stay.”

Well, it’s time to find a pen, Fernando, as not only have McLaren supplied you with a competitive car…

Ok, even if it is Mika Hakkinen’s title-winning car to go into your museum.

Not only that, but McLaren also won the raft race!

Winners! Congrats to our speedy crew stormed to victory in the #F1RaftRace. ??? pic.twitter.com/f0hPYmF0Hv

Other enjoyable Alonso moment #1: Referring to Jolyon Palmer as “this guy”.

Other enjoyable Alonso moment #2: Getting absolutely mobbed by the fans after breaking down in the race

It was great to see the raft race return after a near 20-year absence and it’s well worth a watch if you missed it on Saturday. Yes, it’s 30 minutes long but you’re supposed to working anyway…

If you want to take away just one key highlight, then look no further than this… 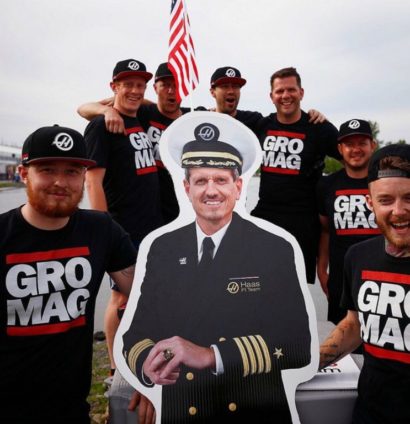 The return of the raft race represented another sign that Liberty Media are trying to make race weekends more memorable and more accessible to the fans.

WATCH: For the first time in two decades, we have footage from an @FIA Driver Briefing. Go inside the #MonacoGP briefing here! pic.twitter.com/z7GqShcOjb

Of course, Vettel is at the back playing the class clown. We wouldn’t have it any other way.

Seriously, though, much more of this: it’s great.

Firstly he picked out the two idiotic photographers who almost certainly had a death wish. Health and Safety officer: tick. 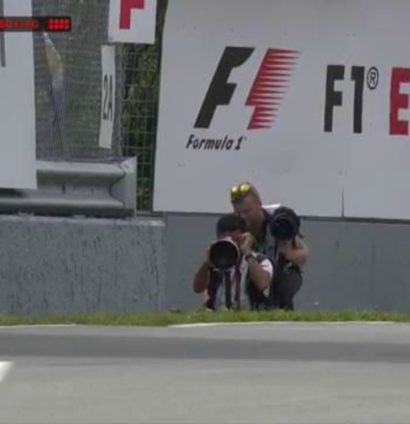 And it turns out Kimi is also a time-traveller, which would explain an awful lot.

There is a clear contrast of emotions at Red Bull between Max Verstappen and Daniel Ricciardo.

But, how does Ricciardo stay so cool?

Are drivers more relaxed with new owners? RIC: "They supplied everyone with a good dose of marijuana. I just got it naturally in my system."

Meanwhile, Verstappen came to Canada still seething after his “f**king disaster” in Monaco when Ricciardo managed to make the over-cut stick.

And for evidence of that, we didn’t need to look far… 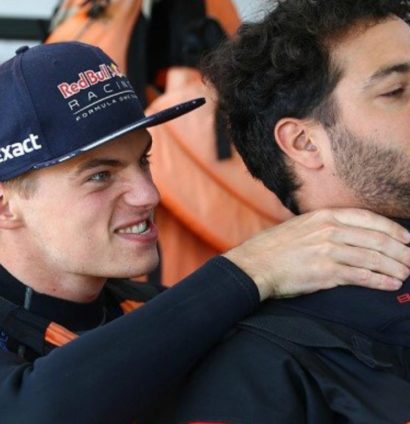 It just wasn’t meant to be for Mad Max after his flying start on Sunday, even his parade car broke down for goodness sake, but at least he was able to channel his inner Alonso… 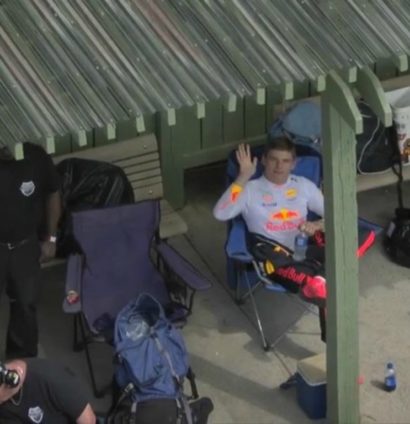 Daniil Kvyat after being hit with two penalties for the same incident: “It’s a circus, a stupid f*****g circus!”

Christian Horner after being asked what he was talking to Niki Lauda about in FP1: “I was finding out why he is such a miserable bugger and not taking part in the raft race.”

Kimi Raikkonen after his brake problem: “Vittu!” (Well done getting that one past the censors)

How can we not end on Sir Patrick Stewart’s, a knight of the British Empire, doing a ‘shoey’? That podium presentation will live long in the memory.