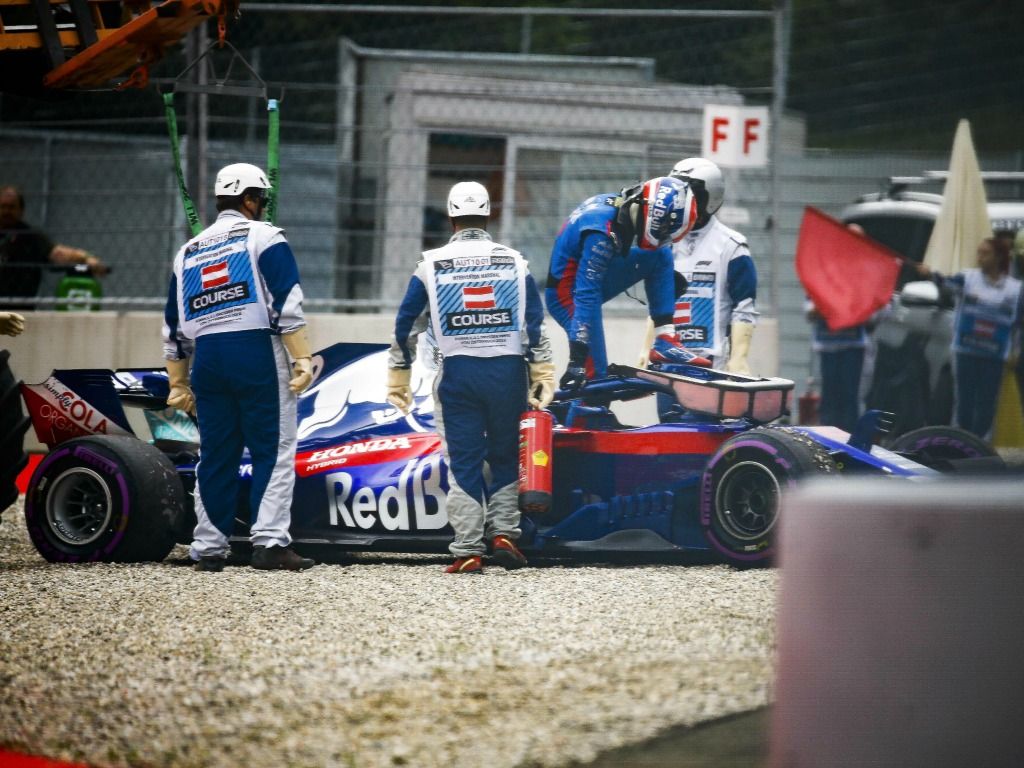 Haas finished P7 and P8 in the second session, while Pierre Gasly broke the suspension on his Toro Rosso. Both McLaren and Renault made the top ten.

Romain Grosjean: “It’s been a pretty good day. It’s a pretty cool track. I always love coming here. I love the layout in the middle of the mountains, and it’s a great atmosphere. The rain held off, which is good. We prefer dry days where we can get good mileage, and it’s good for the fans, and ourselves, for everyone. The car has performed very well, so we’re happy with where we are. The balance has been pretty good. We’ve got some more work to do but, generally, it’s good and I’m happy with it, but we can make some changes to it to make it even faster. I’m very much looking forward to qualifying tomorrow.”

Kevin Magnussen: “It looks like we’re going well. It’s been a good day in terms of testing and getting things done that we had planned to do. The car has behaved as well as we expected. So far, it’s alright – we just need to get it done tomorrow, as well. The track is the same as last year. The car is a little bit different, obviously, but it’s been good at many races and it seems like it’s good here, as well. We need to get it all together tomorrow and then have a good qualifying session to get a good position for the race and, hopefully, score points on Sunday.”

Pierre Gasly: “It was a good first day in Spielberg. I was in the top 10 for both practice sessions and I’m feeling pretty good with the car, hopefully we can keep the momentum for tomorrow! We need to be careful because we were quite fast in Paul Ricard on Friday as well, and then things changed. So I need to make sure we keep improving this time, also because this is a short track and the gap to the others is really tight. I had a bit of a moment in FP2 where the car got damaged, but the guys did a fantastic job to repair it and get me back out before the session ended. It’s a positive beginning and I’ll work hard with the team tonight to find some more performance for tomorrow.”

Brendon Hartley: “There were no issues on my side during the first day in Austria. We lacked a bit of pace in today’s practice sessions, which we will be working on tonight. I haven’t been particularly happy with the balance so there’s quite a bit of work to do to get the car where I want it to be. I’m confident we’ll find a solution and come back stronger tomorrow.”

Stoffel Vandoorne: “It was a pretty busy day today. The morning was spent evaluating a number of new parts and ideas, which meant that the real focus was on getting some consistent laps and some good, clean data. In the afternoon, I was able to get into more of a rhythm with the car, and, while we didn’t really manage to get the balance right, the times weren’t too bad. We still need to work hard, as we’ve seen before that we can look reasonably competitive on a Friday only to drop down the order on Saturdays. The most important thing is that we got some good learning done during the sessions, but it’s still too early to say where we are in the competitive order…”

Fernando Alonso: “This was a pretty intense day as we had a lot of items to test on the car, especially aero parts. We completed the programme, now we just need to analyse the data and make sure we put the best parts on the car tomorrow to find a little more performance. Having an additional DRS zone is a good step: it will be difficult to get close to the car in front, especially in the middle sector, so three DRS zones will help to keep the group together. Hopefully, it should provide more overtaking in the race. We expected rain today, but none came; it’s now on the forecast for tomorrow, so we need to be ready to maximise every opportunity that comes our way if the weather proves to be unpredictable.”

Carlos Sainz: “We’ve been working hard today on getting the right set-up with the car and you could see we’re not quite there yet. Nevertheless, we have a decent number of laps on the board and we know what we need to improve to get a faster and more balanced car. I think we have the potential so I look forward to tomorrow.”

Nico Hulkenberg: “It’s been a fairly typical Friday. The balance isn’t quite there with the car so we’ve been tackling that as a priority. We didn’t make as much progress as we’d like between FP1 and FP2 and understeer has been our enemy here so far. Fortunately, it’s an enemy we know well so we have some good solutions to apply before we head out for qualifying tomorrow.”