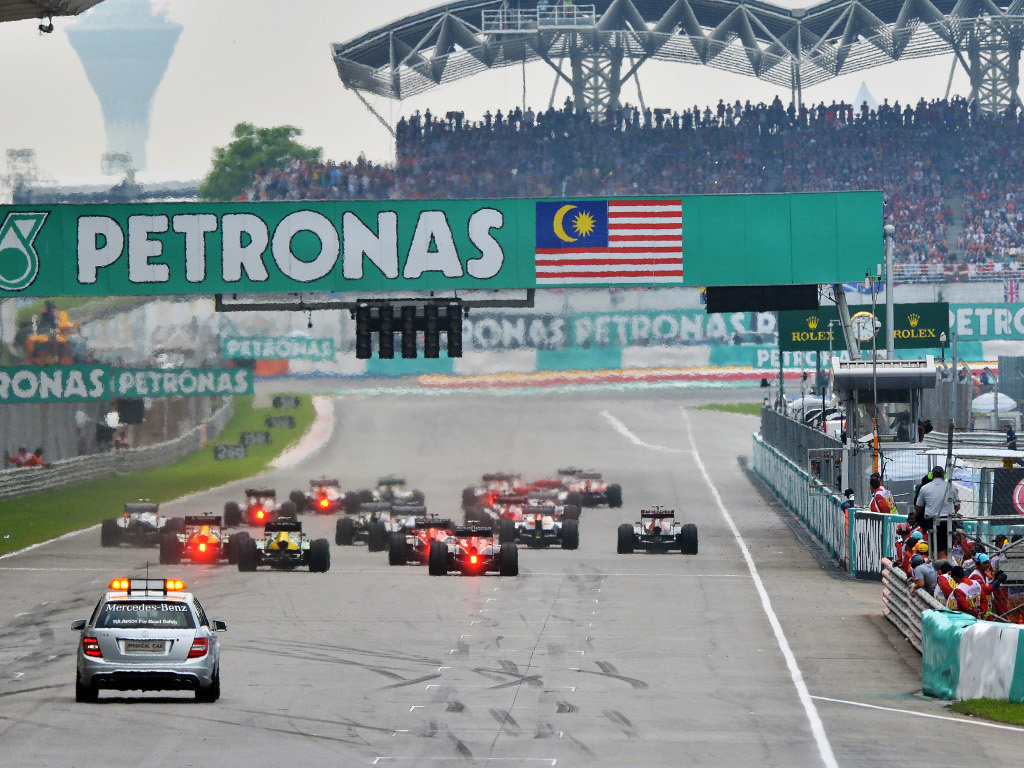 The ultimate test of the cars’ and drivers’ cooling systems, Daniil can’t empty his drink bottle too early this race.

1 It’s Going To Be Hot
The extreme heat and humidity are always great tests of a driver’s fitness programme. The Malaysian GP puts a lot of stress on drivers, especially rookies such as Kvyat and Magnussen who are more familiar with driving for 35 minutes than 100 minutes. It’s going to be a big test for them, especially this year when there is more to manage and more to think about on the car. Cognitive function falls off with tiredness and so late race mistakes are more likely.
2 We All Know What Happened Last Year
Rewind a year and this is the race where Mark Webber was cruising to victory in front of Sebastian Vettel, Christian Horner told the cars to hold station and Vettel decided he was above team orders and went for the win. In the post-race hullabaloo, Vettel pretended he hadn’t fully understood what he was being told to him on team radio, which was clearly nonsense. With Daniel Ricciardo having such a sparkling start to his campaign in Australia Vettel will want to get as many points up on him as he can, so everyone will be focusing on their relative performance and what might happen if they’re near each other in the race.
3 Mercedes Will Want To Put On A Show
It’s the home race for Mercedes sponsor Petronas, and Malaysia could do with a diversion from the events surrounding MH370. Given the degree of advantage Mercedes are enjoying in front of the rest of the field, it looks like the only people who can beat them in Sepang is themselves. Caterham will also want to put on a better show for Tony Fernandes’ Air Asia than they did in Australia. Which won’t be too hard.
4 Are McLaren Going To Be 0.5 Quicker?
Ron Dennis is not a man for rash predictions but he has already said that McLaren will be 0.5 seconds a lap quicker than they were in Melbourne. This sounds like they’ve found some immediate engine mapping or energy recovery gains. Or, most likely, Mercedes have now seen that Red Bull can get a car alongside them on the front row of races and would sooner have a couple of McLarens behind them acting as a points buffer, and handed over some key information.
5 Williams Need To Take Advantage
Through no fault of his own Felipe Massa had a frustrating Aussie GP, while the relatively undamaged Valtteri Bottas looked capable of getting on the podium. Williams need to make the most of their speed advantage before the better-funded teams (Red Bull, Mercedes, Ferrari, McLaren) spend their way out of sight. Felipe will want to keep out of trouble at the start in Malaysia.
6 It’s The Debut Of The Pirelli Hards
The Sepang circuit has a very aggressive asphalt surface and so Pirelli are supplying their new harder Hard for the race. Motorsport boss Paul Hembery said he was very pleased with the way the new tyres reacted in Melbourne with a minimum amount of ‘tearing’ despite the torque being exerted. This race will be more of a test of the tyres as although Melbourne had bumps, it wasn’t tyre-eating tarmac.
7 Lotus Want To Finish
After a belated start the Lotus team will be hoping to get at least one car to the finish line in Malaysia. For them a race distance is going to be a result, especially given the temperatures that are generated by cars during the race. For all teams it will be the sternest test of their cooling systems – ‘can they keep their energy recovery systems in the operating window’. So don’t be surprised if there are more retirements in Malaysia than there were in the relatively cool conditions of Melbourne.
8 Fuel Flow
Will Red Bull take the wise choice and heed the FIA’s advice if they’re asked to turn the fuel flow down on the car? Other teams might have had their reasons to doubt the FIA’s equipment in Australia, but they complied nonetheless. Last season if a football crossed the goal line and the referee and his assistant didn’t see it, it wasn’t a goal. Everyone who saw TV replays immediately knew if it was a goal or not, but the rules were the rules. By ignoring the rules Red Bull have laid themselves open to the charge that they are treating F1 with contempt.
9 Where Are Ferrari?
Ferrari are not as close to the front as they’d hoped to be, given the mood music of their post-Melbourne comments. Fernando struggled to get past the Force India of Nico Hulkenberg in the race and Kimi is trying to get a feel for his brake-by-wire system. Malaysia should give us a much better fix of where they stand in the competitive order.
10 We’ll See More Aspects Of The Cars
With some long, high-speed corners, Sepang has traditionally been good for cars with great chassis and great downforce – and so Red Bull have done well there in the past. So this race will give a better indication of the competitive order at circuits like Barcelona and Silverstone, and show which cars have adapted to the new aero rules the best. Many down the pitlane are saying that the Red Bull RB10 has the pedigree of its predecessors, and in this race, it could be confirmed. Whether it’ll stay cool enough is an entirely different issue.
FH