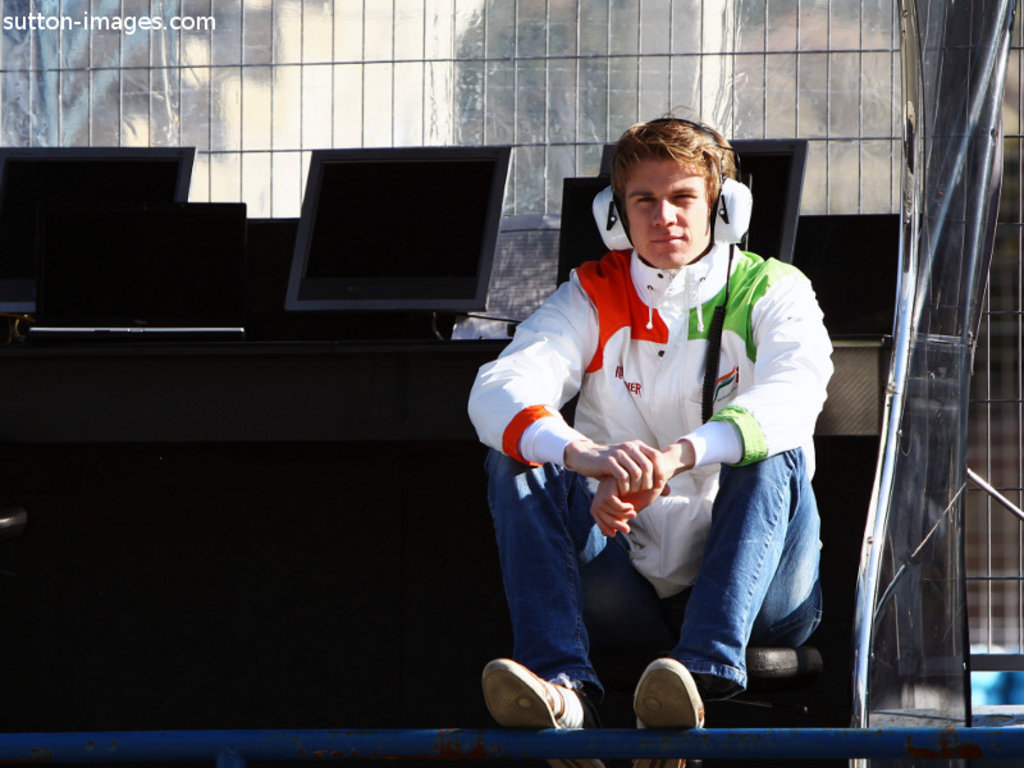 Nico Hulkenberg reveals his goals for 2012, his season as a reserve driver and the team-mate battle at Force India…

Nico Hulkenberg reveals his goals for 2012, his season as a reserve driver and the team-mate battle at Force India.

Q. How excited are you to have the Sahara Force India race seat for 2012?
NH: “I’m lucky that the year of being a reserve driver is over and now hopefully I’m looking forward to a brighter future. I did 14 free practice sessions, which kept me very sharp, and kept me in there. I think also if you look at all the lap times, I have been close to – or even in front of – the race drivers. Establishing myself in F1 is the initial goal, not just for one year, but for many more years. And then we’ll see where it goes.”

Q. We’ve seen quite a few drivers take a year out of racing as a third driver – for example Fernando Alonso in 2002 – but nevertheless mentally it must be tough to take a step back.
NH: “We all love driving these cars, we all love the sport very much, how professional it is, working with the team and so on. If you have to take a step back in terms of having a year as a third driver, you’re still going to take that when you know that there is a chance that you’ll be back the next year. That’s what you’ve got to accept, and then work hard in that one year when you’re out, trying to convince the team to give you a chance. Although Fernando’s example is a bit different, because there was still plenty of testing back in those days!”

Q. The track is often dirty on Friday mornings, and also you had to look after the car. Did that make it difficult for you to make an impression?
NH: “In FP1 track conditions are the same for every driver. But you’re driving the car that the other guy has to race with for the weekend, so you always have to be a bit careful not to shunt it, like Valencia, which was a bit of an unlucky and bad situation. You can’t always push fully, you always have to drive within yourself a couple of tenths, just to be safe and not shunt the car. Also, if you divide 14 FP1s over the eight or nine months we were racing, there were quite a few big gaps – three, four, five weeks from one session to another. Getting it all right with the KERS, the DRS, all the switches you use when you are running the car, that was more of a challenge. With the little driving I did, I got adapted and used to it very quickly all the time, which was very positive, and I’m very happy about that.”

Q. How much could you learn from just doing Fridays?
NH: “You learn a lot, but in a different way. Now I know very much how it works from the outside, how the team operates in the garage and on the pitwall, which might help in the future. Obviously not having the racing experience in 2011 is hurting more, but I had quite a bit of experience in 2010 and before that in GP2 and F3, so I know what to expect. It’s just a question of how quickly I can get back into that weekend rhythm, getting your mindset for qualifying, and for the race.”

Q. How much of an advantage is it starting a new season when you’re already established in the team?
NH: “I know everyone in the team, I know the engineers, I know how they operate. In the winter there’s plenty of time to discuss other stuff with them, how we handle race weekends, how we communicate. I’m comfortable with everyone in the team and at the factory, and I’m looking forward to working full time with them.”

Q. Your team mate is always your biggest rival. What do you think of Paul?
NH: “He’s a very ambitious, talented and intelligent guy. I rate him highly. He’s shown a lot of good stuff in his first season. It’s not going to be easy to beat him, but it’s a good challenge, and I think together we can push ourselves and the team forward.”

Q. Do you like the same sort of things in the car?
NH: “We’re not too dissimilar, I would say. Nowadays set-up between drivers is not hugely different. Maybe one prefers this and one prefers that, but it’s a question of how well you translate that in a race weekend, and work efficiently so that you’ve got your car ready for qualifying and the race.”

Q. Will it take you a few race weekends to get back into the swing of things?
NH: “I hope that within one or two weekends it will all be back! I know from 2010 what to expect. You need to get yourself sharp for qualifying, and the same in the race. Also during the races I need to see what the Pirelli tyres are like, how they develop. That kind of stuff I couldn’t learn this year, so that’s something I have to refresh a little bit. I can’t do it in theory, I have to do it practice. So therefore I have to get in the car, get out there and drive it, and that way it will come back the fastest.”