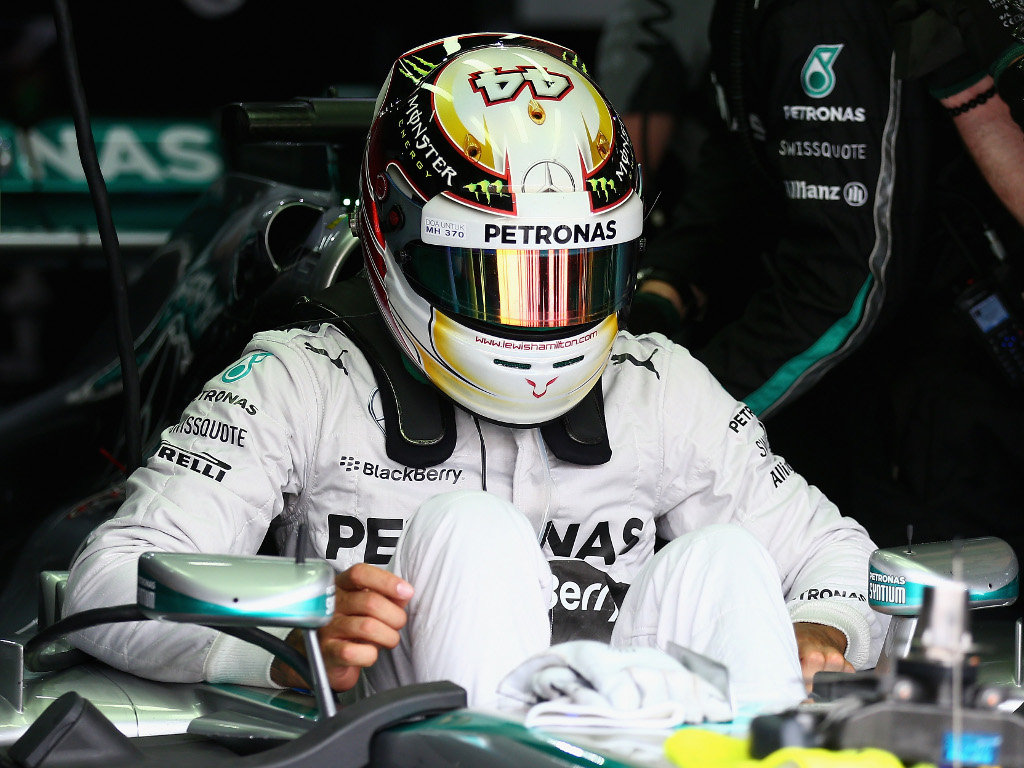 Lewis Hamilton claimed his 33rd career pole position on a wet afternoon at the Sepang circuit in Malaysia.

Qualifying 1
After many delays for rain the starting time was finally confirmed at 16:50, fifty minutes later than scheduled. Mercedes were at the front of a long queue of cars waiting in the pitlane and when the lights went green Marcus Ericsson’s Caterham stalled and he had to be wheeled back to the garage.
Lewis Hamilton set the benchmark time of 1:57.309 which was immediately bettered by team-mate Nico Rosberg with a 1:57.189. All the cars except the McLarens had gone for Inters and they were soon back into pitlane to swap for full wets.
There was a heart-stopping moment when Sebastian Vettel was called back into the pits, “Sebastian, we have a problem with the energy store” but he was soon back on track again.
The Lotus team looked in far better shape in the wet with Romain Grosjean setting the P6 time at one stage, but the other Lotus of Pastor Maldonado looked a long way off the pace. With the two Mclarens back on track they steadily inched their way back up the order – though again it was Magnussen the faster of the two, 12th and 15th, (from 21st and 22nd) and then moving up to 10th and 13th.
Going into the final four minutes the back of the field looked like: 15.Kvyat, 16.Vergne, 17.Maldonado, 18.Sutil, 19.Binachi, 20.Kobayashi, 21.Chilton, 22.Ericsson.
Realising that the track was not going to improve a lot, Mercedes brought both cars in before the end of the session, just as Sebastian Vettel elevated himself to P3.
Marcus Ericsson hadn’t driven an F1 car in the wet before and he put his Caterham’s wheels on the kerb at Turn 3 and spun the car into the barriers, taking out a polystyrene advertising board and putting debris on the track. The session was immediately red-flagged and with less time left on the clock to get out for another lap, the session was effectively over.
So out went: 17.Maldonado, 18.Sutil, 19.Bianchi, 20.Kobayashi, 21.Chilton, 22.Ericsson
Maldonado was two seconds slower than team-mate Grosjean who was in P11 and similarly, Sutil was a second slower than team-mate Gutierrez.
Qualifying 2
For Q2 it was a question of most of the field swapping to full wets, but Kimi Raikkonen tried an exploration on Inters and came straight back in again for wet tyres.
The drivers hadn’t even had time to set a lap time when Daniil Kvyat decided to overtake Fernando Alonso who took a wide, inviting ‘karting line’ into Turn 9 only to chop back across the apex. Kvyat thought there was space he could nip through and went for it, only to find a fast-closing Ferrari which he couldn’t avoid.
The impact broke Alonso’s front track rod and because there was debris on the circuit the session was red flagged while it was recovered. Alonso’s No.14 car headed back to the pits for a lightning change and while the session had been stopped with 12:46 left on the clock, Ferrari got him back out on track with well over ten minutes remaining.
After one lap of timed running the order was: Hamilton, Ricciardo, Rosberg, Vettel, Hulkenberg, Alonso, Magnussen, Perez, Raikkonen.
Moving into the final four minutes the bottom of the timesheets looked like: 9.Perez, 10.Button, 11.Grosjean, 12.Gutierrez, 13.Massa, 14.Vergne, 15.Kvyat, 16.Bottas
Valtteri Bottas had bucked the trend of running full wets and was on Inters, but it was a gamble that didn’t look like it was paying off. Up at the front Kevin Magnussen got his braking wrong for the final corner and skeetered off into the gravel but managed to keep his car going and out again. He would have to pit for his car to be looked at, and inspection showed that he had damaged the rear diffuser with his rallycross excursion.
At the front, Lewis Hamilton was inching his time down. Nico Rosberg regained P2 from Ricciardo but eventually lost out to Vettel. Button managed to move up to P8, Gutierrez put his Sauber into P10, Bottas could only manage P12, while Kvyat’s heroic jump to P10 (the incident with Alonso being investigated after the session) was negated by team-mate Vergne snatching P10. Massa could only manage P13 in what was a disappointing Q2 for Williams.
So out went: 11.Kvyat, 12.Gutierrez, 13.Massa, 14.Perez, 15.Bottas, 16.Grosjean.
Qualifying 3
There was less of a rush to be first at the end of the pitlane in Q3 and Kimi Raikkonen made it out on track first, followed by the two McLarens on Inters, who both came straight back in to change tyres. Magnussen took on full wets, but Button decided to roll the dice and opted for a fresh set off Inters, hoping that it would stop raining. It didn’t.
Raikkonen came round with a 2:01.218 and didn’t go faster for the whole session, Hamilton beat that easily with a 1:59.432 and didn’t go faster either. Rosberg grabbed P2, then it was Alonso in P2 and Vettel up into P2.
With six minutes left, the McLaren engineers radioed through to Button that “we’re on the crossover” but few were improving their time and many were backing up into the final turn to make themselves some space to get an improvement. In fact Vettel backed off so much that he was too late across the line to get in a final flying lap.
On his last lap Hamilton ran wide in Turn 4. Rosberg managed to get up into P3 ahead of Alonso but he couldn’t dislodge Vettel on the front row. It had been an anti-climactic end to a frustrating qualifying for the teams – after which the overriding feeling was: what a stupid time to run a qualifying session.
FH