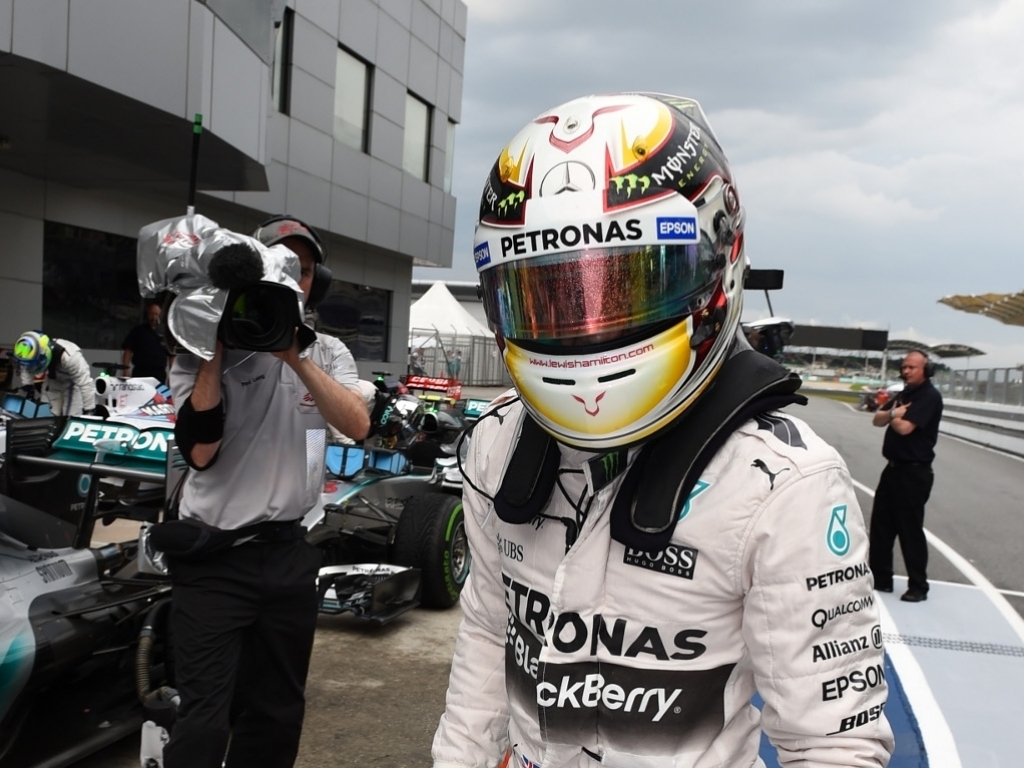 Lewis Hamilton pipped Sebastian Vettel to pole position for the Malaysian GP on a Saturday afternoon where the heavens opened up and Mother Nature had her say.

Q3 at the Sepang circuit was delayed as rain bucketed down midway through Q2. However, once the rain abated the drivers were quickly out onto the track.

As the final ten opted for a mix of intermediates and full wets, Hamilton – on the inters – claimed provisional pole with a 1:49.834, more than a second up Nico Rosberg.

With everyone on fresh intermediate tyres for their final run, Hamilton continued to assert his dominance as he set a fastest first sector time only to back off in the traffic.

Rosberg dropped to third and will line up alongside Daniel Ricciardo who was ahead of his team-mate Daniil Kvyat.

A great qualifying for Max Verstappen saw him claimed sixth place ahead of Felipe Massa, Romain Grosjean and Valtteri Bottas.

Marcus Ericsson, in Q3 for the first time in his career, completed the top ten.

There was a mad dash in Q2 to get in an early lap as the rain was forecast to fall and when it did, it came down hard.

One driver who surprisingly missed out was Kimi Raikkonen. Although he had been quicker of the two Ferraris in the practice sessions, he fell foul of the traffic and was P11 after his opening lap.

And with the rain bucketing down, that was the end of the Finn's Saturday afternoon.

Pastor Maldonado, Nico Hulkenberg, Sergio Perez and Carlos Sainz – another who had the pace to get through to Q3 – all dropped out in the second session.

Meanwhile for the first time ever, McLaren failed in consecutive races to get both cars out of Q1.

Jenson Button qualified P17, a tenth ahead of new team-mate Fernando Alonso. The only team McLaren outqualifed was Manor who as expected were at the very back of the field.

While Roberto Merhi qualified P21, five seconds slower than even the McLarens, Will Stevens was unable to run due to a fuel pressure problem.

As neither were within the 107 percent rule, Manor will have to apply to the stewards for their drivers to race.