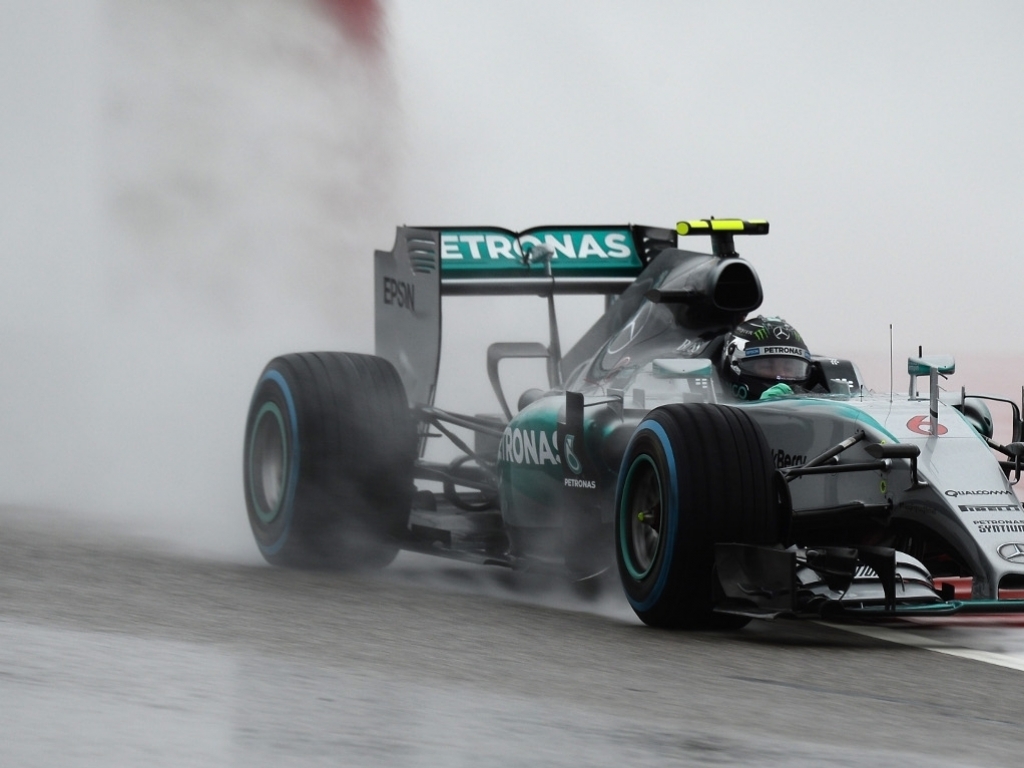 Nico Rosberg will start the United States GP from pole position ahead of Lewis Hamilton on a grid based on times from Q2 after Q3 was cancelled because of the rain.

20 hours after it was set to begin, qualifying finally got underway at the Circuit of the Americas with Race Control instructing the drivers to go out on full wets as the rain continued to fall.

That, though, didn’t help some of them.

Q1 was red flagged when Carlos Sainz ran over the kerb, lost the back end of his Toro Rosso and put it into the barrier. “I crashed, sorry, sorry guys,” he said. “Are you ok?” was the response. “Yes I’m ok,” was the dejected reply. “Good, that’s all that matters,” said his engineer.

Sebastian Vettel was the only other driver to meet the barriers as he tagged the armco with the left rear of his ST15-T. “I hit the wall,” said the Ferrari driver, who narrowly missed dropping out in Q1 as he fell to P15 while in the pits.

Daniel Ricciardo was quickest in the opening session ahead of Nico Rosberg and Lewis Hamilton while both Saubers, Manors and Sainz dropped out.

Q2 was more of the same if not a bit worse as the drivers took to the soggy Austin track where Turn 10 caught out of the majority of the field. One by one they slid or spun on the standing water but, unlike Vettel in Q1, they were all able to keep away from the barriers.

Rosberg, Hamilton and Ricciardo set the pace in Q2 with both McLarens, the two Lotus drivers and Bottas failing to make it through.

In the break between Q2 and Q3 Jenson Button was heard telling his team that the top ten should “not be running” as it is “not safe.” Daniil Kvyat also complained about the dangerous conditions as he brought his Red Bull back into the pits.

The Safety Car was sent out to assess the conditions at which time Q3 was delayed by a few minutes to 10:05.

But with the conditions worsening, qualifying was called and Rosberg secured pole position through his Q2 time, which was a  1:56.824.

Hamilton will line up second on the grid while the Red Bulls of Ricciardo and Daniil Kvyat will occupy the second row.

Although Sebastian Vettel qualified P5, he faces a 10-place penalty, meaning Sergio Perez and Nico Hulkenberg are on row three.