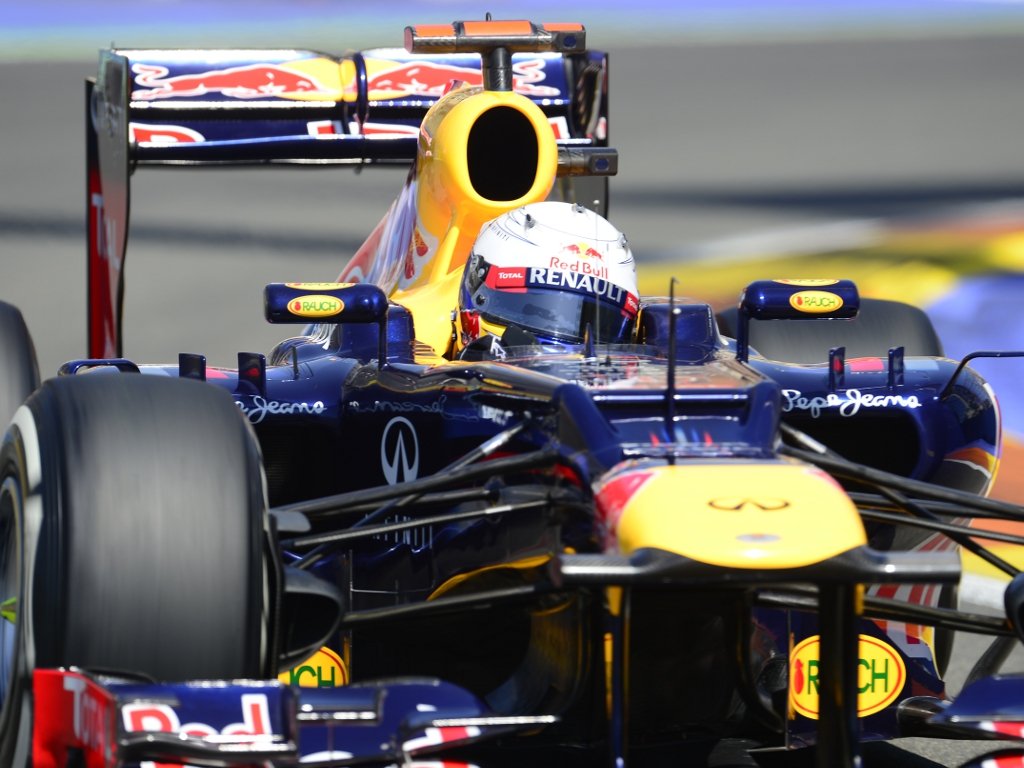 Sebastian Vettel was back to his best in Valencia on Saturday where he claimed pole position by 0.324s over Lewis Hamilton…

Sebastian Vettel was back to his best in Valencia on Saturday where he claimed pole position by 0.324s over Lewis Hamilton.

In one of the tightest ever qualifying sessions, with just 0.22 seconds separating 13 cars in Q2, Vettel pulled out an impressive margin on the rest in Q3. Lewis Hamilton will line up in P2 with Maldonado and Grosjean sharing the second row.

In sharp contrast to Vettel, team-mate Mark Webber was a big loser in qualifying as a non-functioning DRS sent him out in Q1 and both Ferraris failed to make Q3 in front of Ferrari chief Luca Montezemolo.

Qualifying 1
With the ambient remperature up to 25C in bright sunshine, the track had moved up to 43C, eight degrees higher than the final free practice. Timo Glock was already sidelined with a stomache bug.

Most drivers were trying to make a set of the harder Prime tyres get them through to Q2 and running multiple laps.

Into the final four minutes and it was Sergio Perez in 15th, Bruno Senna in 16th, Jean-Eric Vergne in 17th and Heikki Kovalainen in 18th with the usual suspects below that plus the Red Bull of Mark Webber having yet to set a time.

Webber had been sidelined for FP3 and only managed to get out at the closing stages of qualifying. He went straight for the faster option tyre, but the big snag was that his DRS was failing to open which is worth 1.5 seconds a lap around Valencia.

He scrambled up to P16 but was then demoted by Jean-Eric Verne’s Toro Rosso. At the front Paul diResta used the option tyre to go fastest of anyone with a 1:38.858 which was then eclipsed by Pastor Maldonado putting in a 1:38.825.

At this stage Button’s time had slipped to 13th, Vettel to 14th and Kobayashi to 15th, but Webber was going no faster and came back into the pits. At the very last moment of Q1 Heikki Kovalainen came round and beat Vitaly Petrov, but also got ahead of Vergne for P17, eliminating the Frenchman.

Kamui Kobayashi showed the strength of the Sauber posting a 1:38.703 before Nico Rosberg demonstrated the power of the Mercedes with a 1:38.504.

Michael Schumacher was not having the best of qualifying sessions with his W03 running wide on several occasions.

Almost everyone up to P3 decided to run again. Alonso managed P6, Hulkenberg grabbed P5, Paul DiResta P2, Maldonado pushed Alonso further down the order by putting his Williams in P5 – at which point Vettel had been demoted to P10 and Grosjean to P11.

Felipe Massa came round again but could only manage P12, and then when Vettel elevated himself to P3, the Ferrari of Alonso was on the bubble at P10.

Romain Grosjean then proved that Lotus were exceptionally capable around the streets of Valencia with a new P1 time, a 1:38.489 and Alonso was demoted to P11 and out.

It had been a miserable session for Ferrari with both cars out of Q3, all in front of Ferrari chief Luca Montezemolo. However they were eliminated by the smallest of margins. Between P1 and P13 there was just 0.22 of a second, perhaps the tightest qualifying top ten of all time.

Qualifying 3
With such a tight margin at the top it looked like it could have been anybody’s pole position at the start of Q3. Though very few cars came out at the start.

Raikkonen set provisional pole with a very beatable 1:38.966 and it was beaten seconds later by Nico Rosberg with a 1:38.623 (despite a lock-up into the final corner). Lewis Hamilton took P2 and then Jenson Button took P2 off him.

So, after the initial runs it was: Rosberg, Button, Hamilton, Raikkonen.

Out came the others and Romain Grosjean survived a wobble at Turn 13 to take provisional pole with a 1:38.505. Pastor Maldonado then set hearts racing in the Williams garage with an even better 1:38.475

Nico Hulkenberg slotted his Force India into P4, but all eyes turned to the timing screens and Sebastian Vettel’s one and only run which was setting the timing screens purple. At one stage of the lap he was 0.5 a massive margin when just 0.22 had covered 13 cars before.

He crossed the line with a 1:38.086 and a guaranteed pole. Kimi Raikkonen managed P4 before Lewis Hamilton booked a front row slot alongside Vettel. Button’s second run was no better and didn’t threaten the front-runners.

So, it was very much like the Canadian GP where Vettel dominated at the last moment with Hamilton alongside him on the grid. Behind him in P3 was an ecstatic Pastor Maldonado who had his fair share of adventures en route to a second row start. Grosjean and Raikkonen would line up in 4th and 5th ahead of Rosberg, Kobayashi, Hulkenberg and the disappointed Button and DiResta neither of whom approached their Q2 times.

With the track likely to get hotter on Sunday and both Lotus cars excelling in the heat, not too many people are predicting tomorrow’s podium places with any great confidence.