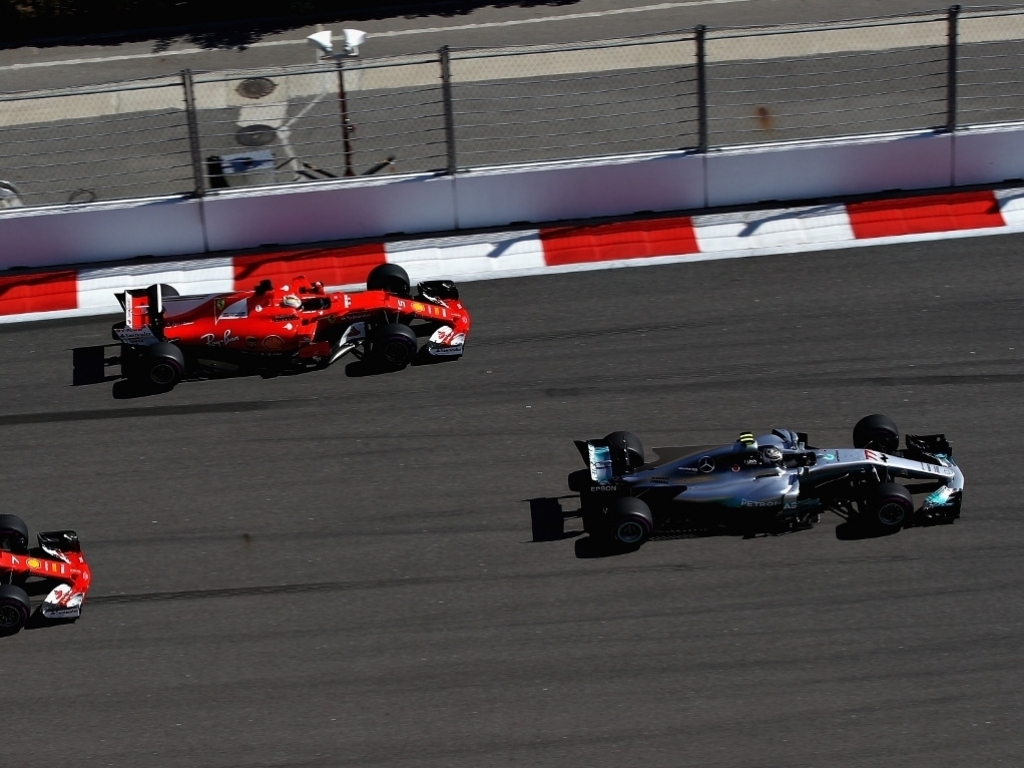 A storming start from third to first set up Valtteri Bottas for his maiden F1 win with the Mercedes driver holding off Sebastian Vettel to triumph in Russia.

As the excitement over the latest installment in the Ferrari versus Mercedes battle mounted, Fernando Alonso became the second McLaren driver to retire before a race in two races as he broke down on the formation lap. An extra formation lap, 53 laps down to 52, and just 19 starters.

And that was soon down to 17 runners as Romain Grosjean and Jolyon Palmer came together on the opening lap. Grosjean on the inside, Palmer on the outside, Grosjean tagged Palmer, Palmer took out Grosjean. Both cars smashed and the Safety Car was out.

In sharp contrast it was an epic opening lap for Valtteri Bottas, who slipstreamed Sebastian Vettel through Turn 1 to lead ahead of the Ferraris and Lewis Hamilton. He made another great getaway after the Safety Car to pull clear of Vettel.

The retirements continued to mount as Daniel Ricciardo, running seventh, reported that his brakes were on fire. Red Bull replied: “We have a problem with one of our brakes.” Ricciardo made it back to the pits where he retired the car.

Unfazed by the drama behind him Bottas put in an incredible first stint on the ultrasoft tyres as he pulled away from Vettel, who in turn dropped Raikkonen. Hamilton, who complained of rising temperatures, backed off from the podium battle.

The race settled down with Bottas extending his gap over Vettel; Vettel doing the same to Raikkonen, and Hamilton staying roughly three seconds behind the Finn while Max Verstappen, Felipe Massa, Sergio Perez, Esteban Ocon, Nico Hulkenberg and Kevin Magnussen ran inside the top ten – and were all separated by three of more seconds.

Midway through the 52-lap race, Vettel began to lay down the hot laps – aided by traffic for Bottas – and he reduced the gap to three seconds.

Bottas pitted, first of the top five to do so, coming in on lap 27. Vettel stayed out with Bottas emerging from the pits 21.3s behind the German. Raikkonen and Verstappen were next in and then Hamilton – and still Vettel stayed out. He pitted at the end of lap 34 and came out P2, 4.4s behind Bottas.

On fresher supersoft tyres the Ferrari driver began to hunt down Bottas, reducing his advantage to 3.1 with 15 to go. A lockup and a brief off-track moment for Bottas flat-spotted his left front and, in one lap, Vettel closed up to 2.2s.

Catching traffic both Bottas and Vettel had traffic but while the Finn made short work of Felipe Massa, Vettel had a tougher time. Bottas raced to the victory, his first in Formula 1, by 0.617s ahead of Vettel.

Raikkonen completed the rostrum in a distant third place while Hamilton was fourth as he lacked the pace needed to challenge those ahead. Max Verstappen was another who had a lonely afternoon on his way to fifth.

Sergio Perez was sixth ahead of Esteban Ocon and Nico Hulkenberg, who was the very last driver to pit – coming in on lap 41. Felipe Massa and Carlos Sainz completed the points with Lance Stroll missing out in 11th place.