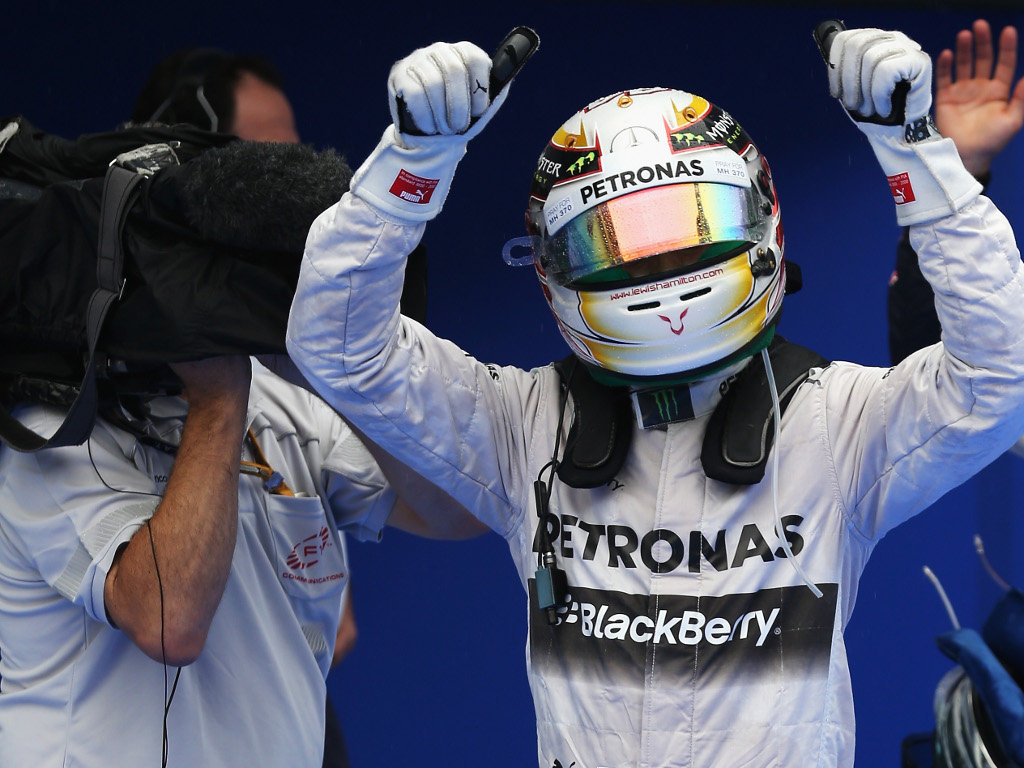 On a dry Sepang circuit, Hamilton started from pole position – his fourth in Malaysia – and led off the line ahead of Rosberg and the chasing Red Bull racers.

Unchallenged, Hamilton easily began to etch out an advantage over the chasing pack and held it through both his pit stops.

Such was Mercedes’ advantage over the chasing pack that Hamilton’s race engineer told the race leader that they would turn down his engine by switching to a different mode midway through the 56-lap grand prix. They did the same for Rosberg.

With 20 laps to go the rain fell lightly for just a few laps. This, though, did little to halt Hamilton’s charge and he coasted to a 17s victory over Rosberg.

It was a tense battle between the two Red Bull drivers to join the Mercedes duo on the podium.

Fighting one another off the line, Daniel Ricciardo was not willing to play second fiddle to his reigning World Champion team-mate and took third. Vettel kept the pressure on until he was able to use his DRS and shot by his team-mate on lap 3.

The German maintained the advantage to claim his first podium finish – and first points – of the 2014 Championship while Ricciardo’s race was undone when, on his second stop, his team did not put the left front on securely.

He stopped in the pit lane, was pushed back for the team to redo it, and came back out a full lap behind the leaders. Back on track, though, the Aussie suffered a broken front wing and limped back to the pits where he got a new wring and returned to the action as the very last driver still running. He was then hit with a stop-go penalty for an unsafe release. He eventually retired with four laps to go.

Fernando Alonso brought his F14T home in fourth place as he once again lacked the grunt needed to challenge those ahead while Nico Hulkenberg, whose two-stop plan backfired as he was caught late in the race by Alonso, was fifth for Force India.

Jenson Button was sixth for McLaren, beating the Williams duo of Felipe Massa and Valtteri Bottas.

There was a bit of argy-bargy between the Williams drivers at the start as Massa yelled “did you see what he did? He touched me”. Bottas was then told “not to attack Massa” and responded “I have more pace than him.”

In the end Massa was told with three to go that Bottas was quicker than him and to let his team-mate take the position. A lap later he was told Bottas “had better tyres, do not hold him up.” Massa, however, did nothing to help his team-mate and held on to seventh ahead of him.

Kevin Magnussen and Daniil Kvyat continued their fantastic debuts as the F1 rookies completed the top ten in ninth and tenth respectively.

Meanwhile, Kimi Raikkonen’s race was undone on lap 2 when he limped back into the pits having suffered a puncture in his battle on lap 1 with Magnussen. He recovered to finish P12.

Magnussen was penalised for the accident, a five-second stop-go penalty. It was the second handed out on the day as earlier Jules Bianchi received a similar punishment for colliding with Pastor Maldonado on the opening lap.

Maldonado’s day went from bad to worse after that as he parked his E22 on lap 7, told “we need to retire the car, box this lap” by his Lotus team. Bianchi later retired as well.

Jean-Eric Vergne, Adrian Sutil and Esteban Gutierrez also failed to see the chequered flag while it was a dismal afternoon for Sergio Perez as the Mexican never even made it to the grid due to a hydraulic problem with his Force India.