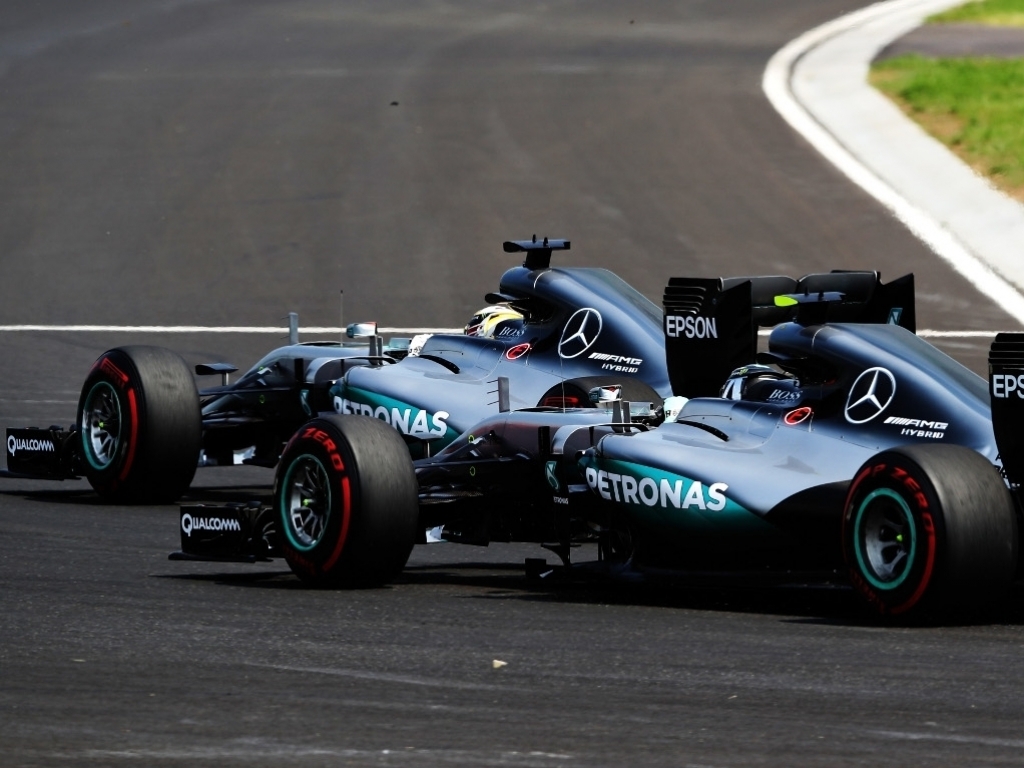 Lewis Hamilton set a new record for the most Hungarian GP victories, five, as he raced to the win on Sunday, setting it up with a great getaway off the line.

Although starts have been the Brit’s Achilles’ Heel this season, Hamilton pushed that aside as he match pole-sitter Nico Rosberg as the lights went out and held the inside line to take the lead.

He briefly gave up the lead to Rosberg when he pitted on lap 16. But with Rosberg in a lap later, Hamilton retook P1 by 1.5 seconds.

Swapping to the soft Pirellis and with the track temperature hovering in the early 50s, Hamilton struggled for pace compared to the chasers. He was told to “pick the pace up a little bit” and replied: “I’m working on it.”

He made his second stop on lap 41 swapping softs for softs, a move mimicked by Rosberg a lap later. This time Hamilton increased his advantage to 3.7s and it was a race to the line for the Mercedes team-mates.

Rosberg was assisted in his pursuit by Esteban Gutierrez, who was hit with a five-second time penalty for holding up Hamilton for half a lap. Hamilton responded with a personal best and raced to the victory by 1.9 seconds ahead of Rosberg. In doing so he also took the lead in the Drivers’ Championship by six points over his Mercedes partner.

Daniel Ricciardo tried to involve himself in the Mercedes battle as he not only briefly held P2 at the start, but he also closed in on them in the middle stint as his Red Bull coped better with the soft tyres. But despite opting for an early second stop in the hope of leapfrogging either driver, he had to settle for third on the day.

Sebastian Vettel and Max Verstappen fought over fourth place with the Ferrari driver undercutting the Dutchman in the first round of pit stops to take the position.  Verstappen almost lost out to Kimi Raikkonen as well as the Finn, who ran a long first stint after starting on the soft tyres given his P14 on the grid, tried to pass on lap 55. Verstappen hold the position, Raikkonen was left with a broken front wing. He continued to harrass the Red Bull driver but was not able to make a pass, finishing P6.

Fernando Alonso was next in line ahead of Carlos Sainz and Valtteri Bottas. Nico Hulkenberg claimed the final points-paying position as he benefitted from a spin for Jolyon Palmer that dropped the Renault rookie out of P10 and down to P13.

Meanwhile Jenson Button fell afoul of the radio ban, handed a drive-through penalty for unauthorised communication after he reported that the “pedal is stuck to the floor.” He was told “do not shift, we have lost hydraulic pressure” but was able to continue as McLaren fix the problem.

Button’s response to the penalty: “The brake pedal going to the floor isn’t classed as a safety issue? Interesting.” Button eventually retired on lap 63 with an oil leak, the first retirement of the grand prix.