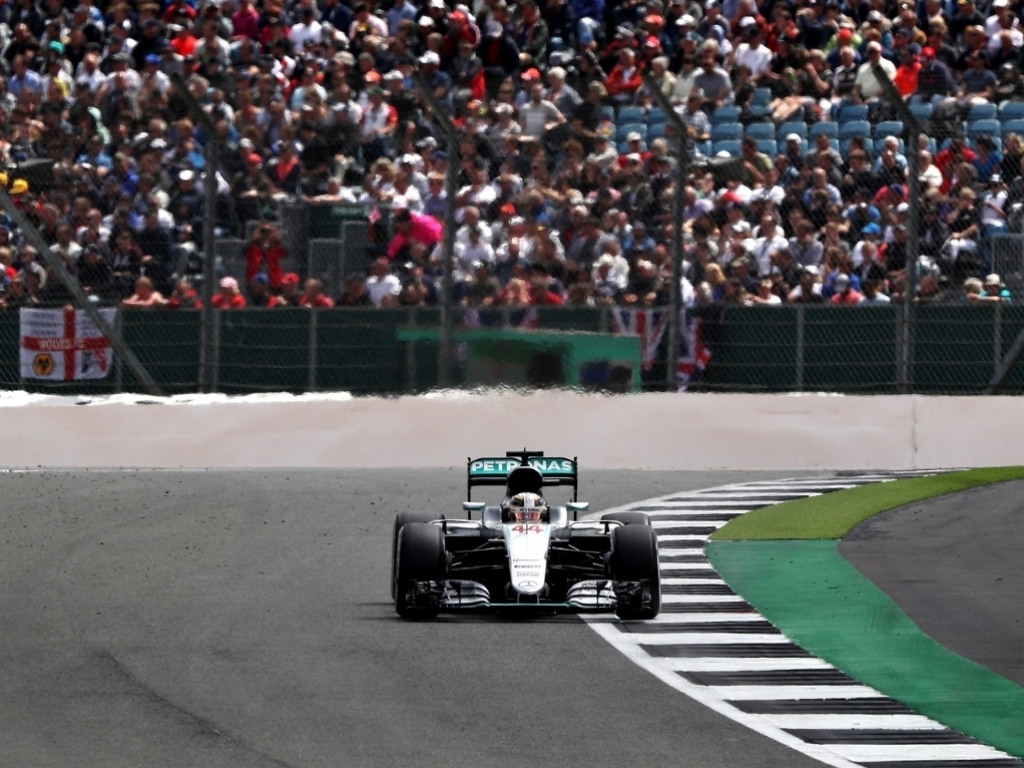 Lewis Hamilton claimed his fourth British Grand Prix in wet-dry conditions as Max Verstappen took the fight to Nico Rosberg, but ultimately could not hold him off.

The British Grand Prix began under Safety Car conditions and with all the drivers on the full wets after a downpour minutes before the grand prix.  The race proper began on Lap 5 with ten drivers, including Kimi Raikkonen, Valtteri Bottas, Carlos Sainz, Nico Hulkenberg, Fernando Alonso and Sebastian Vettel pulling into the pits for inters. Daniel Ricciardo pitted a lap later, and had to wiggle his way out of Jenson Button's path as the latter pulled in as he pulled out.

Race leader Hamilton put on a set of inters on lap 8, pitting with a five second lead. He was followed in Rosberg, Verstappen and Sergio Perez. They came out first, second, third and fourth and comfortably ahead of fifth-placed Ricciardo.

With all the drivers on inters it became a straight fight; to stay ahead of the car behind; to protect the inters until the track was ready for dry; and two keep the car on the track – something Rio Haryanto and Valtteri Bottas both struggled with as they spun.

Verstappen was one driver who found his rhythm on a drying circuit as he went around the outside of Rosberg through the high-speed complex to take second on lap 16.

On the same lap Vettel, who was down in 11th place, was the first to switch to the slicks, taking on a set of mediums, before Raikkonen came in a lap later. Six others followed the Finn in before Hamilton gave up the lead to put on a set of mediums while Rosberg also pitted. Verstappen led for one lap before he too came in, re-emerging in second, 5.3s ahead of Rosberg – seven behind Hamilton.

While those behind them struggled with the damp patches off the racing line, so too did the drivers at the front with Hamilton and Verstappen both going off at Turn 1 – and on the same lap. They returned to the track with Hamilton 4.2s ahead of the Red Bull driver, who in turn was 1.1s off Rosberg.

Hamilton set about rebuilding his advantage to over eight seconds, helped all the time by the intense battle between Verstappen and Rosberg with the German attacking twice. He finally made it stick on lap 38, passing around the outside into Stowe.

Mercedes ran the 1-2 with the gap all but stationary before Rosberg screamed "gearbox problem!" on lap 47. Rosberg asked for clarification and was told to "avoid seventh gear" and "shift through it."

Hamilton raced to the victory, his fourth at Silverstone, by 6.9 seconds ahead of Rosberg. Verstappen was third, but was told that Rosberg could be in trouble for Mercedes giving him instructions over the radio.

Ricciardo had a quiet afternoon in fourth, finishing ahead of Raikkonen, who made a late pass on Perez, and the Force India driver.

Hulkenberg made it two Force Indias in the points ahead of Sainz, who had been as high as P6 before he spun at Abbey, which cost him positions.

Sebastian Vettel's day went from bad to worse as he was handed a five-second time penalty for forcing Felipe Massa off the track. However, as he finished 5.9s ahead of Daniil Kvyat he remained P9 with the Toro Rosso driver tenth.

Pascal Wehrlein was the first driver to crash out as he went aquaplaning off at Turn 1. Marcus Ericsson, who was cleared by the FIA doctors and the stewards to race, retired on lap 12 with an apparent engine problem.

Romain Grosjean joined the list when he stopped at Copse Corner while Haryanto was "in the barrier" at Abbey, a corner that caught out several drivers.

Jolyon Palmer, who had a 10-second stop/go penalty for unsafe release in the pits, retired on lap 40, pulling his Renault into the garage. Kevin Magnussen retired on the penultimate lap.