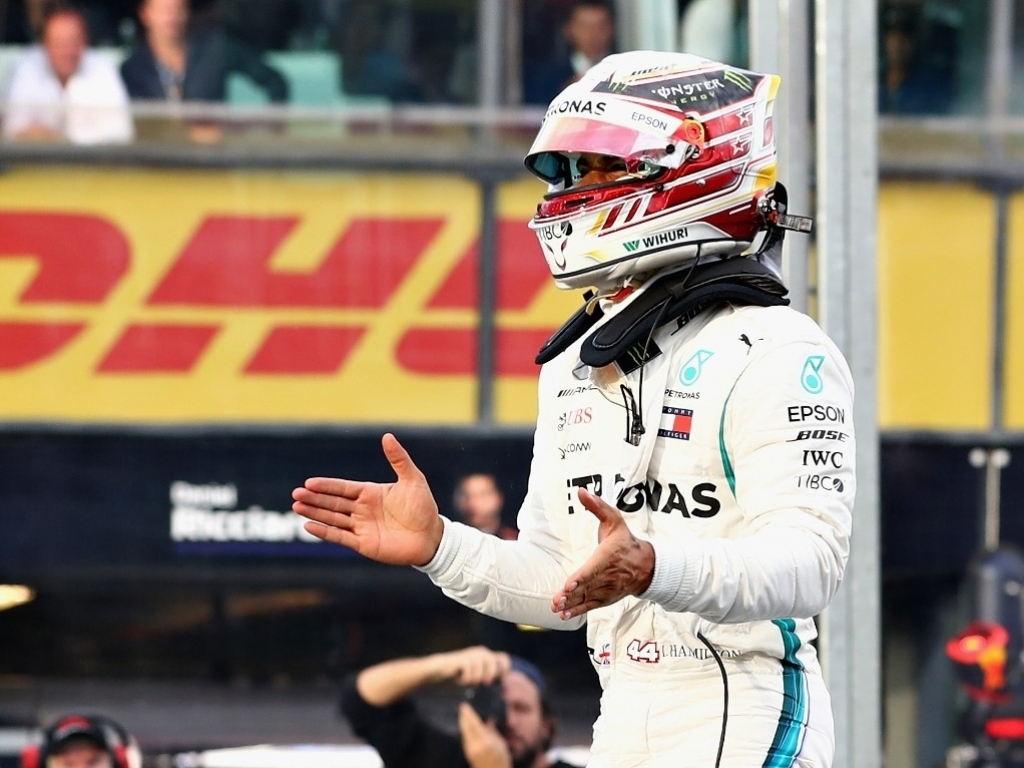 Lewis Hamilton took advantage of a late Safety Car, the result of the Red Bull drivers taking each other out, and a puncture for his team-mate to win the Azerbaijan GP ahead of Kimi Raikkonen.

The forecasted wind arrived in Azerbaijan on Sunday with gusts of 50mph, funelling between the buildings and adding to the tricky conditions. Kimi Raikkonen, Romain Grosjean and Charles Leclerc all fell foul of the conditions as they made their way to the grid.

That, though, was just the start of the drama.

Battling for position on the opening lap, Raikkonen and Esteban Ocon made contact, neither giving the other room and they collided with Ocon retiring. Sergey Sirotkin joined him on the sideline as he ran into Sergio Perez, found himself stuck between Fernando Alonso and Nico Hulkenberg, and took a second hit.

Alonso suffered not one but two right side punctures, and had to pit for new rubber. “What a stupid guy, he closed the door,” he said. Perez, Kevin Magnussen and Marcus Ericsson, handed a 10-second time penalty for causing a collision, also pitted for repairs as the Safety Car was deployed to allow marshals to clear up the debris.

Oh, and at the front, pole sitter Sebastian Vettel led ahead of Lewis Hamilton, Valtteri Bottas and Daniel Ricciardo.

The race restarted on lap 6, this time in a much more orderly manner with Vettel pulling away ahead of the Mercedes drivers while Carlos Sainz attacked the Red Bulls, first Daniel Ricciardo and then Max Verstappen. The latter fought back.

While Hamilton reported he needed “more grip”, dropping three seconds behind Vettel, Raikkonen asked Ferrari if his car was okay as he “touched the wall at 17 or 18.”

As for Verstappen, he complained that his “battery is not charging” as he overtaken by Sainz and then Nico Hulkenberg. Ricciardo also had battery issues.

BOTH Renaults pass BOTH Red Bulls

Hulkenberg’s race ended at Turn 4 as he whacked the wall and retired his Renault at the next corner. That meant Charles Leclerc continued his momentum and claimed yet another place as he overtook Lance Stroll to run seventh with Kimi Raikkonen and Romain Grosjean completing the top ten as the pit stops began.

Sainz was the first of the top ten to pit as his tyres were shot while Vettel extended his lead to almost five seconds as Hamilton went off the track at Turn 16, caught out by a gust of wind.

Bottas in third was a further five seconds down with the Red Bulls almost half a minute behind the race leader. Raikkonen overtook Stroll and Leclerc to work his way up to sixth place, two seconds behind Ricciardo’s P5.

As if there wasn’t enough for the drivers to deal with, race control reported: “DRS detection at detection point 1 inactive – manual operation permitted.”

Another mistake from Hamilton, this time at Turn 1, had the locking-up-running-wide Mercedes driver reporting that his “tyres are done” and pitting on lap 22. He was 8.3s behind Vettel at the time with the German throwing down a personal best with Ferrari seemingly unworried about Mercedes doing the undercut. “We have eight second margin to Hamilton, we stay out.”

Told to “keep it clean”, Verstappen found himself under attack from Ricciardo but the Dutchman refused to give an inch. Wheels almost touching, Verstappen pulled ahead of Ricciardo with the Aussie backing off to avoid a collision.

Vettel pitted on lap 31, 10s up on Bottas, and emerged in second place, behind Bottas but eight seconds in front of Hamilton, who was told to up his pace if he “wants to keep P2.” Ricciardo finally passed Verstappen, putting in a fastest race lap, before slipstreaming his team-mate and taking fourth into Turn 1 on lap 35.

Ricciardo, lap 38, Verstappen, lap 39, were two of the last three inside the top ten to pit with Verstappen overcutting his team-mate for fourth place. Ricciardo tried to fight back, and dummied his team-mate.

Verstappen responded with a double move, they crashed. Game over, a double DNF for Red Bull. Mercedes immediately pitted race leader Bottas with Vettel and Hamilton also coming in behind the Safety Car.

Make that into the final six laps as Grosjean crashed behind the Safety Car. “No, no,” he screamed. He was weaving to get temperature into the tyres and just dropped it. The medical car was deployed, hinting at the force at which the Haas hit the barriers.

The race restarted on lap 48 with Bottas going very early and pulling away, Hamilton used the tow to attack Vettel who responded by braking late. Too late as he went off the track. Bottas led ahead of Hamilton, Raikkonen and Vettel.

Behind them it was Perez, Leclerc, Sainz, Alonso, Stroll and Pierre Gasly.

However, there was more late drama as Bottas suffered a puncture, letting Hamilton up into the lead. He won the race ahead of Raikkonen and Perez, who passed Vettel.

The German was fourth ahead of Sainz, Leclerc, Alonso, Stroll, Vandoorne and Hartley.