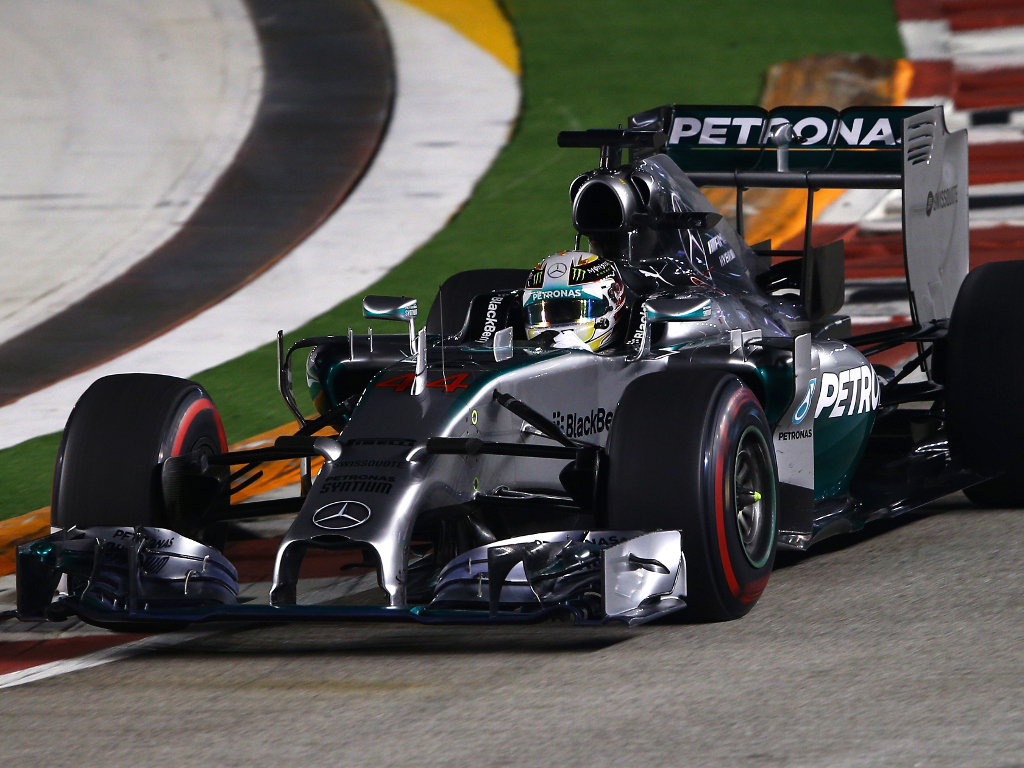 Lewis Hamilton is leading the Championship for only the second time this season after claiming the Singapore GP win on a night when nothing went right for Nico Rosberg.

Rosberg was set to start Sunday’s night race at the Marina Bay circuit from second but his W05 suffered gearbox and electrical problems. Although he made the grid, he was unable to get the car going and started from the pit lane.

As his car troubles continued, he overtook just one car – Max Chilton – before coming into the pits for his first stop of the night. It was also his last as he waved his hands, calling it quits as there were yet more issues which even included a small brake fire.

Rosberg’s problems meant the pressure was lifted from Hamilton and he raced to an untroubled lead of five seconds ahead of Fernando Alonso when the Safety Car was brought out on lap 31. The SC emerged when Sergio Perez tagged the back of Adrian Sutil’s Sauber leaving debris all over the track.

And although the field bunched up, that did little to curb Hamilton’s chances of winning as he stormed away from the Red Bull of Sebastian Vettel, leading by 5.8s after just two laps of racing.

The Mercedes driver continued to pull away from the Red Bull driver and was over 25.2s ahead when he came in for his third and final stop on lap 51 of 60. He came out in second place behind Vettel but needed just two laps to retake the lead. Back at the front he stormed away from the German to take his seventh win of this season and the lead in the Drivers’ Championship, three points ahead of Rosberg.

Vettel brought his RB10 home in second place, holding off the challenge of his team-mate Daniel Ricciardo on a night where both Red Bull drivers opted for two-stop strategies.

Fernando Alonso was fourth after a hairy start as he ran it wide at Turn 1, jumping up to second place. The Spaniard, though, immediately gave a position back and had looked to be on course for second place in the race before pitting for a third time under the Safety Car. He dropped to fourth and just never managed to haul back one of the Red Bulls.

Felipe Massa was fifth for Williams ahead of the Toro Rosso of Jean-Eric Vergne. And although the Frenchman had a five-second penalty he held onto the position as he was 7.2s ahead of seventh placed Sergio Perez.

Kimi Raikkonen brought his Ferrari home in eighth place ahead of Nico Hulkenberg and Kevin Magnussen. Valtteri Bottas was 11th after his Pirellis let go on the final lap dropping him from sixth to outside the points.

It was another dismal Sunday for Sauber who recorded a double retirement. They joined Rosberg, Kamui Kobayashi, who suffered brake failure on the formation lap, and Jenson Button, whose MP4-29 shut down with seven to go, on the sidelines.