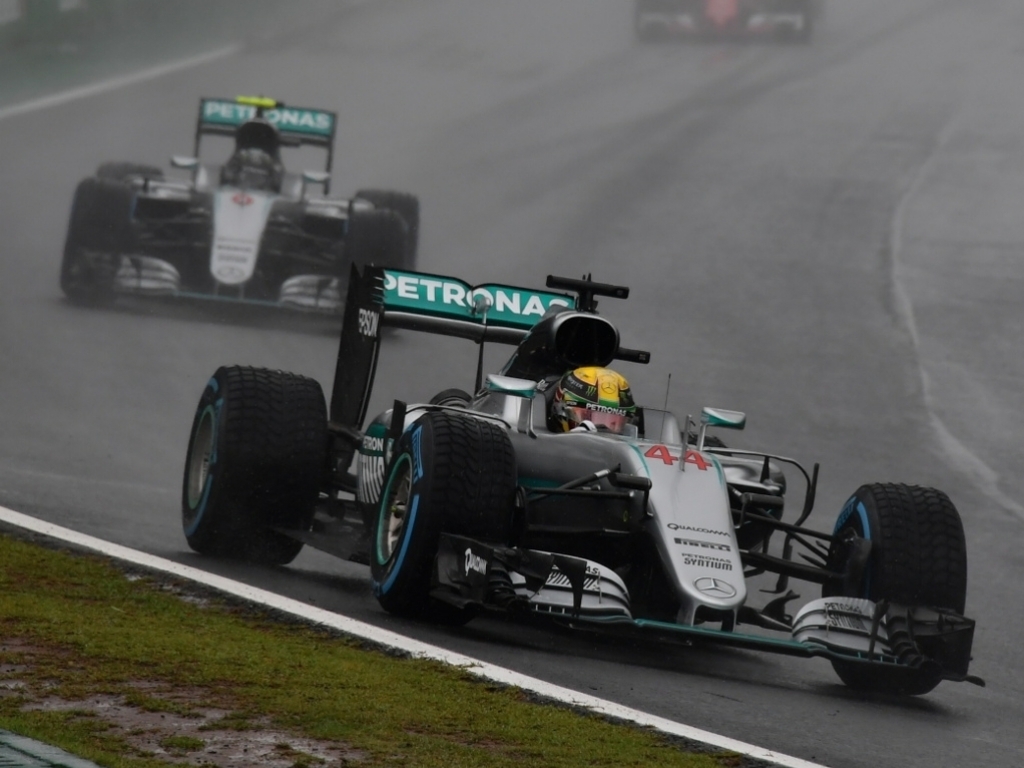 As the rain came down in Brazil the only certainty was chaos and Formula 1 delivered just that as Lewis Hamilton raced to the victory ahead of Nico Rosberg.

Pouring rain, crashes, Safety Cars, red flags and penalties were the order of the day as Formula 1 raced around the Interlagos circuit on Sunday afternoon.

As forecast, the rain came down in Sao Paulo drenching the track. That resulted in a 30G hit for Romain Grosjean on his out-lap to the grid as he crashed at Turn 14; a 10 minute delay to the start; and a Safety Car.

The field stayed behind the Safety Car before racing got underway on lap 7 with Hamilton quick to pull away ahead of Rosberg.

The Safety Car was back for Marcus Ericsson’s crash on lap 13, he hit the barriers after touching the white lines and came to a halt in the pitlane entrance, while Kimi Raikkonen’s accident on the main straight on lap 19 brought out the red flags for the first time.

“Conditions are mad. It’s just stupid. Red flag. Red flag. We need extremes and we need to stop the race. How many people do you want to crash?” was Sebastian Vettel’s assessment moments before the red was thrown.

The race resumed after half an hour, a stop in which Nico Hulkenberg needed a new front wing having collected pieces of Raikkonen’s and Jolyon Palmer retired with a damaged suspension, only to be red flagged again after seven laps behind the Safety Car. Another stoppage and another Safety Car restart.

Hamilton backed up the field before pulling away while Rosberg was attacked – and overtaken – by Max Verstappen in a plume of spray. The Red Bull driver nearly threw it away as he touched a white line, spun, slid and narrowly avoided shunting – and still held onto second.

Red Bull dropped out of contention when they pitted for inters, falling down the order. Daniel Ricciardo coming out P11, losing time as he had to remain stationary for five seconds after being hit with a penalty for pitting when the pitlane was closed for Ericsson’s crash, and Verstappen came out P5. As the rain continued Red Bull were forced to pit again for wets with Ricciardo P12 and Verstappen 16th.

Felipe Massa’s accident on lap 48 saw the Safety Car take to the track as the Brazilian, competing in his final home race, crashed near the scene of Ericsson’s shunt. Tears and a standing ovation with applause from all the garages greeted him as he walked back to the Williams garage.

When the race resumed Hamilton and Rosberg romped away from the chasing pack to cross the line 1-2 for Mercedes, the Brit 11 seconds ahead of his team-mate. It was a result that suited both drivers as Hamilton kept the championship alive and Rosberg limited the damage. He leads by 12 points going into the season finale in Abu Dhabi.

Verstappen recovered to third after a late overtake on Sergio Perez. The Force India driver was fourth ahead of Vettel, Carlos Sainz, Nico Hulkenberg and Ricciardo.

Sauber bagged their first points of this season as Felipe Nasr brought his C35 home in ninth place while Fernando Alonso completed the points in tenth place.