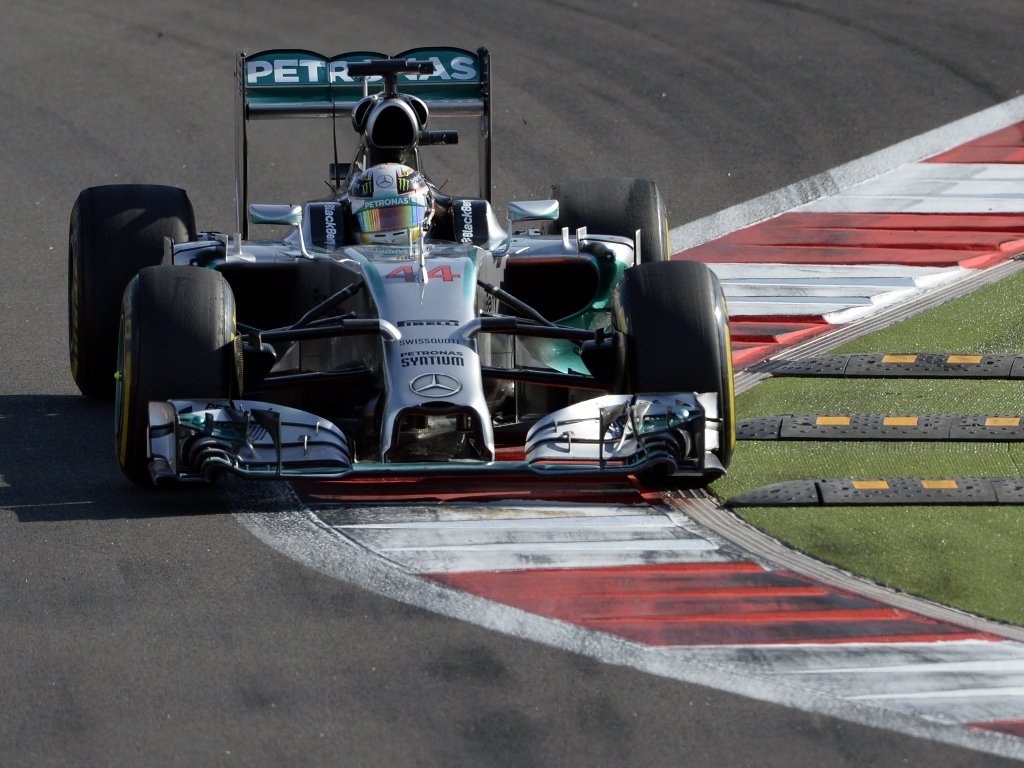 It was a tale of two Mercedes cars as Lewis Hamilton romped to the victory in Russia, always at the front of the pack, while Nico Rosberg recovered from P20 to the podium.

After an emotional time on the grid where the drivers stood in solidarity with the injured Jules Bianchi, it was down to business at the Sochi circuit on Sunday afternoon.

Starting from pole position, Hamilton was almost taken by Nico Rosberg into the first corner, however, the German got it all wrong. He locked up, flat-spotted his tyres and cut the corner.

Although he did get ahead of his team-mate, he was told to give the position back only to inform the team he needed to pit anyway as he had a “vibration” from flat-spotting his tyres. He re-emerged P20 with only Felipe Massa, who also pitted on lap 1, behind him.

While Hamilton slowly but surely etched out a lead over Valtteri Bottas, putting in several fastest laps to get away from the tenacious Williams driver, Rosberg was forced to work his way through traffic.

Hamilton was leading by 21.7s when he came in for his stop on lap 27 and, when it all played out, was 20.5s ahead of Bottas while Rosberg had worked his way up to third. He made that second on lap 30 when he muscled past the Finn at Turn 2.

Putting in fastest laps as his Pirelli tyres came back to him, Rosberg began to close the gap only to have his tyres again go off meaning he had to sit back and settle for lapping behind his team-mate.

Hamilton raced to a comfortable victory, 13.6s ahead of his team-mate, and in doing so increased his lead in the Drivers’ Championship to 17 points over the chasing Rosberg.

Mercedes’ ninth 1-2 result of this Championship secured the Constructors’ titles as the second-placed Red Bull no longer have a mathematical chance of beating the Brackley squad.

Bottas completed the podium as once again Williams just didn’t have the pace to run with the Mercedes over a full race distance while Jenson Button was fourth.

In a solid afternoon for McLaren, his team-mate Kevin Magnussen crossed the line in fifth place, helping McLaren to retake fifth in the Constructors’ Championship from Force India.

Fernando Alonso finished sixth after a slow pit stop and confusion with the front jackman cost him valuable time while Daniel Ricciardo was seventh for Red Bull ahead of his team-mate Sebastian Vettel.

Kimi Raikkonen and Sergio Perez completed the top ten while Russia’s only driver Daniil Kvyat’s great qualifying came to naught as he dropped from fifth to eighth on the opening lap and, 53 laps later, was down in 14th place – even behind team-mate Jean-Eric Vergne.

It was a dismal afternoon for Marussia as their sole driver Max Chilton retired on lap 11 with a suspected suspension problem. He was joined on the sidelines by Kamui Kobayashi who revealed he was told to park his CT05 by “top management” despite there being “nothing wrong with the car.”