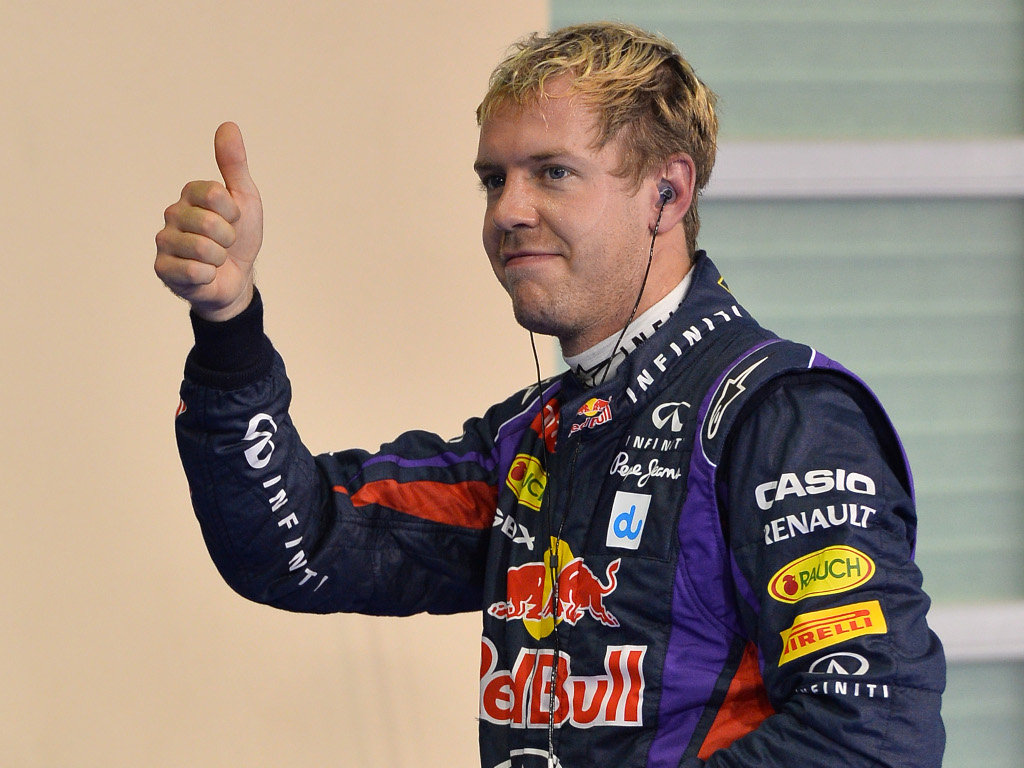 Sebastian Vettel put in a clinical display at the Abu Dhabi Grand Prix to extend his winning streak to seven successive races….

Sebastian Vettel put in a clinical display at the Abu Dhabi Grand Prix to extend his winning streak to seven successive races.

Having won the World Championship last time out in India, Vettel vowed ahead of Abu Dhabi that he would not change his approach as he wanted more victories. And that was evident on Sunday.

Starting second on the grid, the Red Bull racer outsprinted team-mate Mark Webber to take the lead into the first corner. Webber also lost out to Nico Riosberg but would evenually make it a Red Bull 1-2, with Rosberg finishing in P3 and Romain Grosjean in P4.

Fernando Alonso escaped sanction from the stewards for overtaking off the track to grab P5 with a determined drive for Ferrari.

Race Report
It was predictably warm and dry as the cars lined up on the grid at Yas Marina with the ambient temperature at 32C and the track at 35C. Kimi Raikkonen, after his penalty for failing a floor deflection test, elected to start from the back of the grid rather than the pitlane where he could change many of the settings on the car (as Vettel had done last year).

As the cars went off on the parade lap it was revealed that Fernando Alonso had chosen a new of the soft tyres and it was Jenson Button in P12 who was the first of the medium tyre runners.

The red lights went out and both Red Bulls got a good getaway, but with Vettel’s car on the inside, he was able to take the line from polesitter Webber into Turn 1 and it was then a question of Mark duelling with the Mercedes of Nico Rosberg.

Lewis Hamilton got boxed in behind this action and Romain Grosjean was able to take advantage by driving round the outside of the Brit.

Further back, Kimi Raikkonen’s Lotus made contact with a Caterham and broke the right front suspension, while for the second race running Jenson Button radioed back that he’d sustained damage on the opening lap, this time to his front wing (after appearing to nerf the back of Paul DiResta’s car) and he was in for a new one at the end of Lap 2. He took on a set of soft tyres, changed them shortly after on Lap 11, and ran to the flag for 44 laps.

The tyre stops started from Lap 5 when Maldonado came in, then it was Perez on Lap 6, Hamilton and Ricciardo on Lap 7, Webber and Grosjean on Lap 8, Hulkenberg on Lap 9, Rosberg on Lap 10 – so on Lap 11 Vettel – still to stop – had a 23.3 second lead over the next man on the road, who was Felipe Massa, at this point of the race 3.2 seconds up on team-mate Alonso.
Vettel finally pitted on Lap 14, while Alonso stayed out till Lap 16 and Massa until Lap 18.

With the exception of Vettel, the cars in the top 10 who had started on soft tyres were then all held up to varying degrees by the cars in front who had started on medium tyres and weren’t going to be in for a while. Mark Webber managed to find a way past Adrian Sutil, while Lewis Hamilton was racking up temperatures and locking his tyres in a bid to pass the Sauber of Esteban Gutierrez.

At one stage Hamilton radioed back to the team that Gutierrez was making double moves to block, something that he’d been doing in India, and over which the stewards failed to act. However by Lap 18 he was back in the pits releasing Hamilton. Similarly, Nico Rosberg was held up behind Paul Di Resta with Mark Webber in close attendance.

The order was soon changed with Mark Webber cruising past Nico Rosberg to make it a Red Bull 1-2, Paul DiResta having pitted at the end of Lap 20 and rejoining in P13 – he was going to try and make a set of tyres last till the end.

Sergio Perez and Fernando Alonso had been duelling on the opening lap and Alonso’s pit-stop had put him behind the McLaren driver. On Lap 21 they were running close behind the Williams of Valtteri Bottas (who would be taking a set off mediums all the way to lap 24). Alonso having been bottled up for so long, then dispatched Perez and Bottas in close succession and was up to P9.

Sebastian Vettel was in total control of the race with a 28.3 second gap to mark Webber in P2 on Lap 23.

Having spent time following Guiterrez, Hamilton was now stuck behind the one-stopping Adrian Sutil and it allowed the cars behind to catch up. So on Lap 25 Sutil had a train of Hamilton, Massa and Hulkenberg. With Alonso catching Hulkenberg.
While trying to figure a way past the Force India driver, Massa made an opportunistic pass on Hamilton to grab P6 (described by engineer Rob Smedley as “sweet”). He wasted no time in getting past Sutil, while further back, Alonso ran wheel to wheel with Nico Hulkenberg before making the pass for P8.