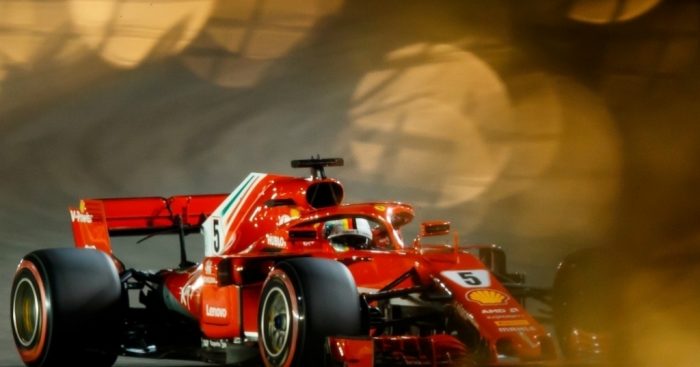 Sebastian Vettel: "Obviously, this is a great way to start the season and it wasn't expected. Obviously Australia was a different race and if you compare these two races, here we had the pace and won on our own. So, I think it's been much better, but it was a very tough race. It took a while for the adrenaline to go, but for the next week we are not sure where we are going to be. It is difficult to predict with everything changing so much. In China it will be a different track and a different challenge, but we have to improve our car and work on it. We still need to improve the balance. However, if we should have a similar feeling like here, then I think we should be in a good shape. We were losing a little bit at the end and Bottas was getting closer. We couldn't wait and see what he was doing. So, in response to that we had to come in first to protect the track as much as I could. We had targeted two stops and that's why we had chosen Soft tires. But then we had to change strategy; the tyres were already wearing out, but then it seemed everything was ok. But after 10 or 12 laps, the tires got worse and the last five laps were very tricky. It feels better winning here than in Australia, because here we had the pace. So, I am very happy, even though it's sad to see one of our guys getting injured. I wish him to get well soon, I know he's in very good hands now."

Kimi Raikkonen: "What happened to our guy Francesco today at the pit-stop is very unfortunate. I feel sorry for him and hope he's going to be OK soon. It's always a bad thing when someone gets injured but I am sure he has the best people taking good care of him and I wish him a speedy recovery. As for the accident itself, all I know is that I moved when I saw the green light go on. I couldn't have possibly realized that there was an issue with the rear left wheel, then I saw someone had got hurt and, immediately, I was told to stop by the team. Unfortunately something must have gone wrong and we'll need to find out what. The car had good speed today but I had some wheelspin at the start. Anyway, there's not much I can do now but wait for the next race, where we'll try to do our best."

Valtteri Bottas: "It was so close in the end, it's a shame I couldn't win. When it's so close, you start to think about every lap and every corner after the race, trying to figure out if there is something you could have done better. But I feel like I did a good race, I didn't make any mistakes and I gave it everything I had. I didn't try the Medium tyres before the race, but it went well and we managed to do a really long stint. Only in the last three laps I started to struggle with the tyres and once I got close to Sebastian everything got more difficult. The pace today was better than expected so that we could put some pressure on Ferrari. It's very close and it's going to be an interesting season. We still have work to do, especially for conditions like here in Bahrain. I think we can see some positives, but the main thing for us is to really learn from this weekend."

Lewis Hamilton: "It was not an easy race, but one that I feel quite happy with now that I've cooled down. Today was all about damage limitation and I think to get in the top three is a really great result for the team and for myself. We would prefer we didn't have the gearbox issue that we had this weekend, but I was really happy with my race pace. I had a really good start but I didn't capitalize on it. I got past a couple of cars off the line and then I went opposite to go on the inside. But the car ahead decided to dice to the right so I had to bail out and had cars pass me on the left, so I fell back on the opening lap. In my mind I knew that I had to get past that group of cars very early on. But by the time I did get past them the guys were 15 seconds ahead, so really the race was lost in those opening laps. Ferrari have shown over the last two races that they have the edge at the moment, but it is close and we definitely have to do a better job. Shanghai has always been a good hunting ground for me, so I really hope that we can go there with some strength."

Pierre Gasly: “Unbelievable, what an incredible day! The second race of the season with Toro Rosso and Honda, and we finish P4. It’s just amazing, I’m so happy! A big thanks to the team because the car was fantastic! I had a nice fight with Magnussen and the pace was really good. I saw unfortunately both Red Bull cars had to stop, then after Raikkonen retired the team told me we had the opportunity to finish P4, so I gave everything to the end. The car has been fantastic since the beginning of the weekend, today I could just push flat out and the pace was great because I managed to pull away from the Haas. I need a bit of time to let this sink in, but we will definitely enjoy it with the team tonight! The start of the race was mega – I managed to overtake Ricciardo in Turn 1 which was great, after that it got a bit tricky when Magnussen overtook me in Turn 1, I knew I had to overtake him straight back because I would lose time and it would be difficult to catch him afterwards. Once I passed, I managed to keep him behind and push flat out while I was trying to manage the tyres, which we did pretty well. I think the pace was great so I’m just super happy.”

Brendon Hartley: “An amazing day for Toro Rosso but a disappointing day for me. I had a good start and first couple of corners but had a small contact with Perez in Turn 4. This not only damaged my front wing for the remainder of the race but I was also given a 10 second time penalty. We had the pace to be comfortably in the points without the penalty so it was a bit frustrating. A big thanks to all at Toro Rosso and at Honda, it has been an amazing turn around since Melbourne which bodes well for the next few races.”