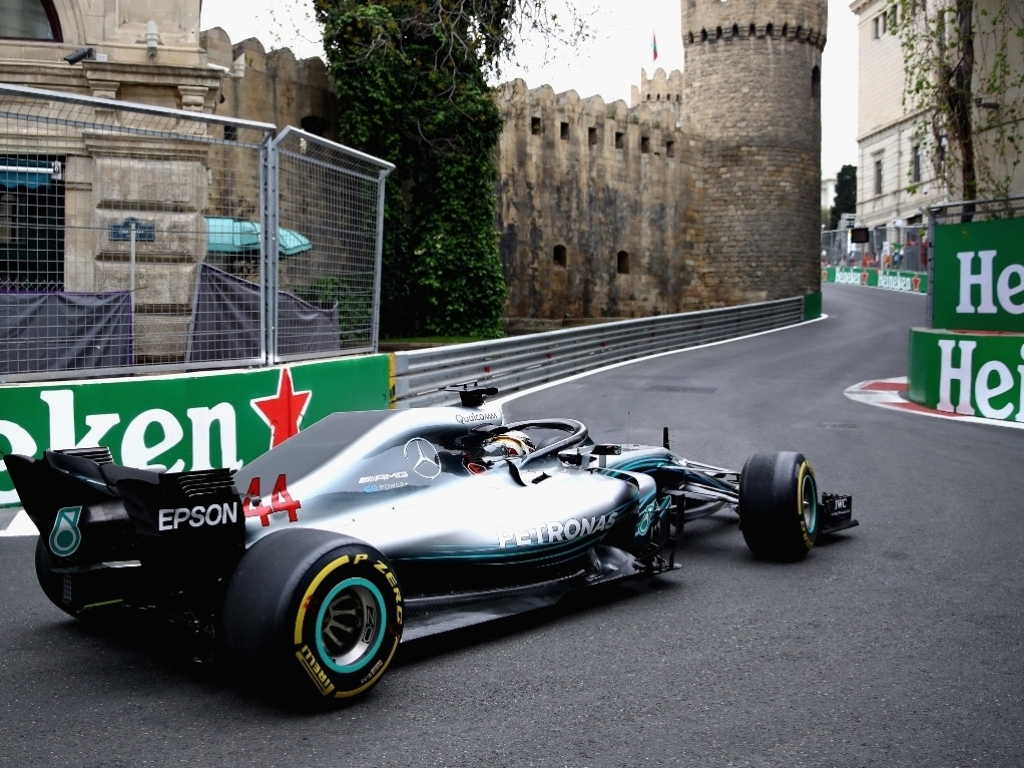 Lewis Hamilton snatches fortuitous victory after Valtteri Bottas picks up devastating puncture. Sergio Perez on the podium in Baku for a second time.

Lewis Hamilton: "I have very mixed emotions today. Valtteri deserved to win, he did an exceptional job and had a faultless drive. This is such a crazy and exciting race and I never gave up. I was constantly pushing but it was a real struggle. I feel incredibly grateful to come out with the win. You have to take the ups with the downs and I can't complain that I won; I will take it and hopefully learn from today. But Valtteri was very, very unfortunate, a one-two would have been a great result for the team. I would not have got by him in the remaining laps if he hadn't had his tyre blow. It looks like Ferrari still has the better car, they outperformed us most of the weekend. We were able to just hold on to them during the race. We definitely have some work to do, but we are in the mix and it's going to be very close. We have to keep our heads down and keep working."

Valtteri Bottas: "I'm absolutely heartbroken. It hurts a lot. But this is racing; some days are good, some days are bad – and some days are very bad. A small piece of debris destroyed my entire weekend. We had a good race until the puncture. The car felt really good and we were fast. I thought I had everything under control on the Safety Car restart, but then suddenly my tyre exploded. I didn't see the debris and I couldn't feel it until the tyre blew. It was really close the last couple of races, so it's good that our team won today, but I'm obviously still very disappointed. I'll try again in two weeks."

Kimi Raikkonen: "It was not the easiest or most enjoyable race. After the accident with Esteban on the first lap, I had to come in to change the nose and switch to soft tyres. I don’t know if my car was damaged, but overall the feeling was ok. The tyres were not consistent, a bit on-and-off; I was struggling to keep them warm enough and had some difficult moments. Some laps they felt good and some others it was more tricky. After that, things went back to normal. I tried to stay out of trouble, pushing when it felt right to do so and do my own race. I was expecting something to happen sooner or later. It’s never too late; you need to be ready, because you never know what can happen until the race is finished. We are pretty confident for the future, because we have the speed, and this is the main thing. We just need to minimise all the mistakes and the issues to be up there all the time. Today obviously feels better than yesterday, it worked out pretty ok. I will happily take this second place, considering the tricky race we had."

Sebastian Vettel: "We are not entirely happy, because we could have won. In fact, I am very upset about losing the position at the restart, because I didn’t want that to happen, but there are also so many positive aspects to take from this race. When the safety car pulled away, I saw a gap and I went for it, but obviously it didn’t work. So, now it’s easy for everyone to say that it was too big a risk, but I was driving at 330 kph on the straight, there was no reference on the left and I didn’t really have many options. Lewis was on the right, while Valtteri was ahead, but I couldn’t really go to the right. I also wanted to go for the inside, but once I locked up, it was tough luck. After that, with the flat spot, it was a shame that I had to give the position to Sergio. Apart from that, I think it was a very good race; we had a good pace and were in control. Anyway, this is how it goes sometimes. I had a chance to win and I tried. It just didn’t work. It was a quick decision, so there was a chance it wouldn’t be right. Now I think we need to look ahead because we had a strong car today. We’ll see what the other races will bring, but we need to stay hungry and keep working."

Sergio Perez: “I’m extremely happy. Our race was a rollercoaster. We started with an incident on the first lap when I was hit from behind by a Williams [Sirotkin]. That pushed me into Kimi [Raikkonen] and broke my front wing so I had to pit. I was at the back and then I was given a five seconds penalty. I was able to make my way through the field and when the Safety Car came out we managed to keep our position. The team did a great pit stop and I was able to serve my penalty and still come out in front of Grosjean. I was looking after my tyres because we only had SuperSofts left and warming them up was very difficult. I was struggling and every corner was a lottery, but then I saw the cars in front of me were struggling too. I passed Seb [Vettel] but then he recovered and put pressure on me. I had to give it everything in the last two laps: my pace was unbelievable and I think they were the best two laps of my life. This podium means a lot to me, I am very pleased and proud for myself, my family, my team and Mexico.”

Esteban Ocon: “It’s disappointing not to finish the race on a day in which we had such good pace. I had a flying start and I managed to pass Kimi [Raikkonen]. I was ahead of him all the way to turn two and when we went into the corner. I was behind Ricciardo but Kimi made a lunge and put me in the barriers. I feel it was my corner and I was on the racing line, but he locked up and hit me. I feel the mistake was on his side: we’ll see what the Stewards say but that won’t change the outcome for me. It’s a shame because Sergio showed we had the pace to do really well here today. I am still very pleased for the team’s result and I hope we can carry our performance forward to Barcelona and beyond.”