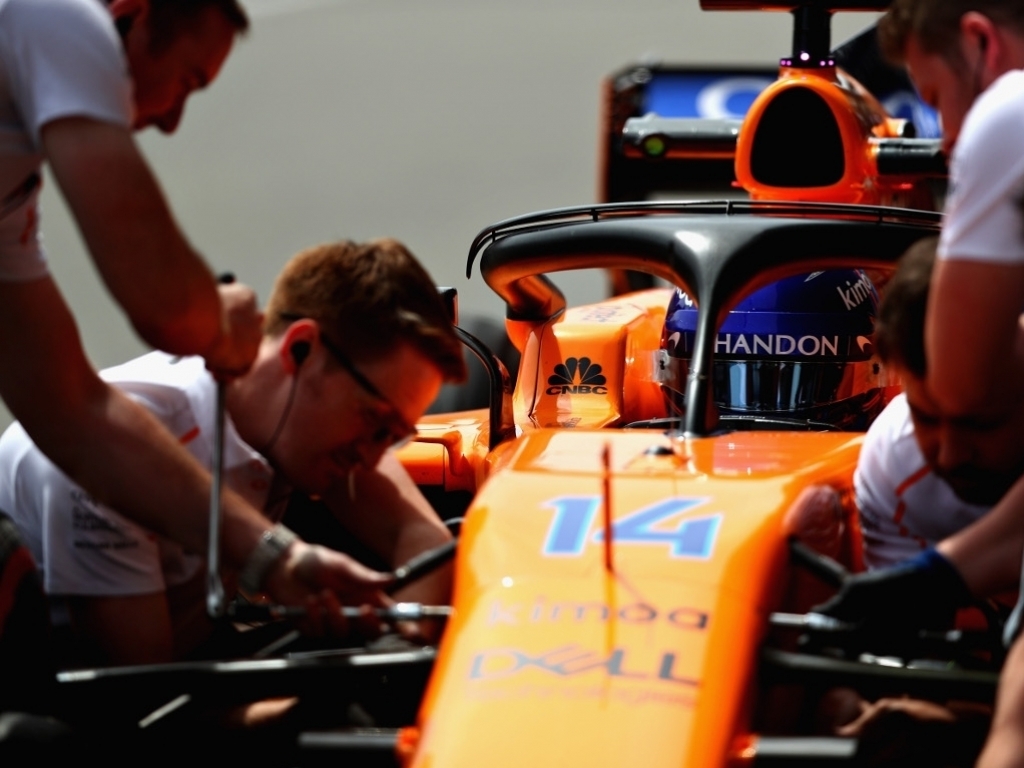 Sauber's Charles Leclerc earns his first points in F1 with a stunning drive; Fernando Alonso comes through the wars to finish P7.

Carlos Sainz: “It’s a very strong result for the team. I’m very happy and it was a really fun race, as always in Baku. It was crazy out there as the grip was difficult today. The first stint was very strong and I was able to overtake both Red Bulls on track. Then, the soft tyre was trickier for us and in the end we had to battle for that fifth place. It is positive for the team to go into Europe in a strong place in the Championship. I need to keep working hard with my engineers to keep building the car to my liking and to keep the points coming. Next stop is Spain and I really look forward to it.”

Nico Hulkenberg: “It’s wild and just crazy here as it’s so tight. We started well but I just lost the rear end at the end of turn four and that was my race done really. I had some rear locking going into that corner and the wind was difficult and it didn’t take much to throw me off. It’s unfortunate but that’s how it is sometimes. Let’s look forward to Spain.”

Charles Leclerc: “It was an amazing race today – I am very happy with my result. It was definitely eventful, with many incidents on track making it especially challenging and fun to drive. I felt comfortable in the car, and did my best to gradually advance to the front of the midfield through the race. It is an incredible feeling to score points for the first time in Formula 1. As a team, we can see our potential, and know what our strengths are. I am very pleased, and look forward to continuing on this positive path.”

Marcus Ericsson: “It was a difficult race for me. I was involved in an incident at the beginning of the race, and picked up some damage to the car. I was struggling to keep everything together after that, and I gave everything to catch up with my direct competitors. In the end, it was good to manage to finish in P11. As a team, we have scored points for the second time this season, which is very motivating, and our potential is becoming more clear with every weekend. We must keep up the good work now. I look forward to the next race weekend in Barcelona.”

Fernando Alonso: “Today’s race was very complicated – right from the very first lap. The first lap in the midfield is the same old story; people preferring to crash into other cars rather than lifting off. But it’s also up to us to qualify further towards the front, where it’s usually a little bit cleaner. On that opening lap, my car was heavily damaged – I had two punctures, with one flat tyre damaging the floor. I also had a damaged front and rear wing. I really thought that would be the end of my race, but after the team fitted a new front wing and fresh tyres, I went back out, fought all race long, and actually found the car to be quite competitive. We were able to overtake a Sauber and a Renault thanks to the Safety Car, which enabled us to recover a couple of positions. It was one of the best races in years for us, I reckon.”

Stoffel Vandoorne: “What a mad afternoon! This race is usually a bit crazy, and we saw that again today. By mid-race, I think I was last, and there was zero chance of making something work. But then the Safety Car came out: I made a good call at the end to put some hot rubber on when everyone else seemed to be struggling with tyre warm-up. Being at the back at that point wasn’t necessarily a bad thing – at the restart, I felt really confident, managed to overtake a few cars, and got myself back in the points. We still lack straight-line speed, which meant it was a struggle to attack or defend in the race, so there’s still some work to do there. Nevertheless, I’m pleased that we got some more points this weekend.”

Lance Stroll: "It was a crazy race. So much happened. I am pretty happy with the race, there were perhaps one or two more positions if we did everything perfectly, but no one had a perfect race today. In that battle with Fernando at the end I think I should have held him there, but he surprised me into turn three. I didn't really see him coming back on the inside and he just managed to sneak through, but that was probably the only little bit we missed today. The wind was strong, I could feel the car getting pushed around a bit so it was definitely noticeable. All in all, I am happy with P8 and it was a good race for the team. We can't assume this pace will carry on to Barcelona, we have to understand our issues and keep working but that is just what we are doing."

Sergey Sirotkin: "It was such a mess in the first few corners. I was between two cars heading into turn three and I was just slowly and progressively squeezed between the two cars, as I was in the middle. At a point I saw I was not going to avoid a crash so I just lifted, hoping they would squeeze me but not hit me that much, but then already there was nothing I could do. We touched, my car jumped and when I landed, I broke my front suspension and my wing. I am just really sorry for this, as it is such a long race, but I understand that we all want to gain positions at the start, which is important. It is a shame in a race in such conditions. Parking the car in turn three is not the best feeling. This was the best weekend so far for us and I am sure we could have squeezed some points out of it."