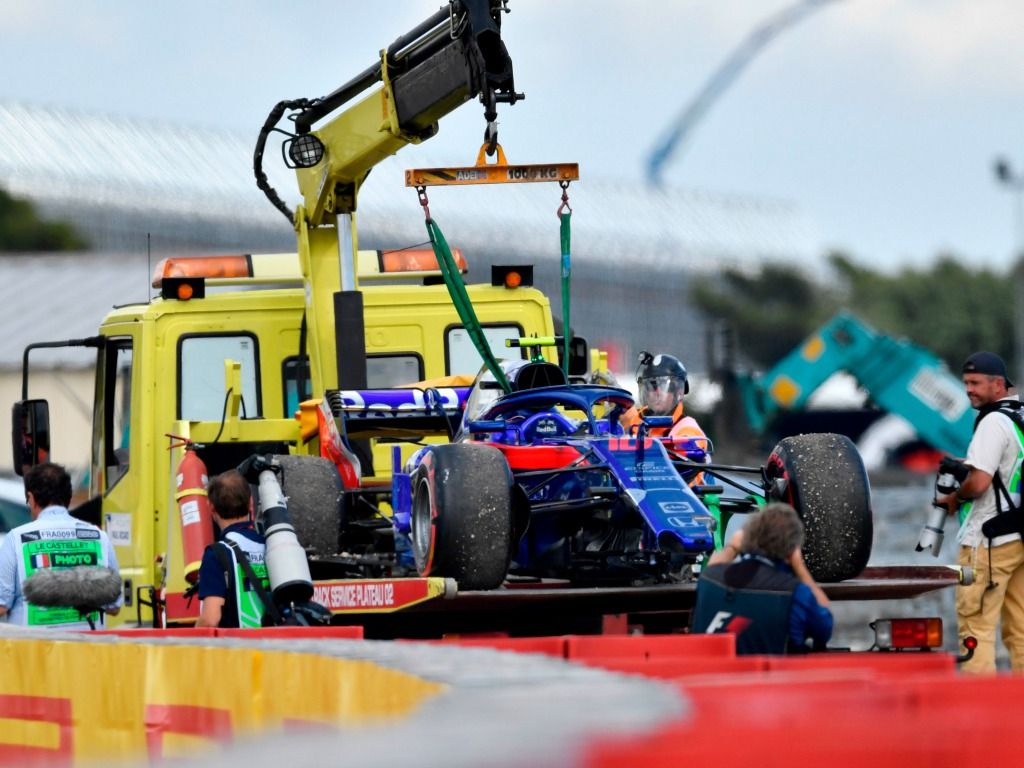 Only two of the six finished, with Pierre Gasly and Esteban Ocon crashing, and Lance Stroll having a tyre failure. Sergio Perez also retired with engine issues

Brendon Hartley: “It was a clean and good race, but starting last it was hard to make much headway. I had a good battle with Marcus early on, but he got me back during the pit stops. I kept out of trouble on the first lap – a couple of cars cut the chicane and I didn’t make up much ground, but at least I was able to keep the car safe. I wish we could have made some more progress but ultimately we didn’t have the pace today. I moved forward and got by the two Williams, but I don’t think there was much more we could do in the race, it’s tricky when you start at the back.”

Pierre Gasly: “I’m very disappointed, it was tough to finish the race after just three corners. In Turn 3 I went on the inside and I thought Esteban had seen me, when I saw he closed the door I couldn’t avoid the collision. It’s a shame to have this incident – especially at the French GP with two French drivers. It’s very difficult to take, I really wanted to do well this weekend and it’s definitely not wanted from my home race.”

Sergey Sirotkin: “It was quite a busy race with some good battles. I had a bit of fun on the first lap, but obviously you want more pace so you can battle and overtake people, but today that was not the case. It would be more pleasant to battle rather than to protect, but still it was a step from qualifying. With our strategy we could fight the cars up to the very end of the race. I still think my race could have played out differently because I was just stuck behind the cars in front. It was costing me the brakes and the tyres, and I wasn’t able to do anything, which I think we could have done differently. I did what the team wanted me to do. We are where we are, it’s not easy.”

Lance Stroll: “At the beginning the pace wasn’t too bad and I had a good start. With about 20 laps to go I felt a massive vibration on the car and it was just big wear on the front-left tyre. I had a flat spot on that tyre and then with Vandoorne when he overtook me it was already so bad that I couldn’t turn right, as I had no support on the left tyre. Then with a few laps to go the vibration was so bad the tyre just blew and that was it. It was optimistic to go the whole race on one set of tyres, and I think we were the only ones trying to go the whole way. We tried to do something, but it just didn’t work. It was certainly not the race we were hoping for.”

Sergio Perez: “It’s disappointing to finish the race like this. We had a sudden drop in water pressure and had to retire the car. It’s a shame because we had the opportunity to score a good amount of points and we leave empty-handed instead. I made a good start and kept clear of the incidents. I would have been eighth but Grosjean cut a few corners and got past me. We gave everything to try and get a result, but the luck wasn’t on our side this weekend. We have upgrades coming for Austria and I hope they can make us more competitive for the next few races.”

Esteban Ocon: “A very disappointing day. I made a good start and got alongside Romain [Grosjean] down the pit straight before he made contact with me. I was on the edge of the track but he moved over and hit me, which caused a lot of damage to the side of my car and the floor. After that, Pierre [Gasly] lost it under braking in turn three and hit me from behind, which ended my race completely. I feel very sad right now because I have been looking forward to racing in front of my home crowd for such a long time and it only lasted three corners. The fans here have been amazing all weekend so I have to say a big ‘thank you’ for all the positive energy they have given me.”