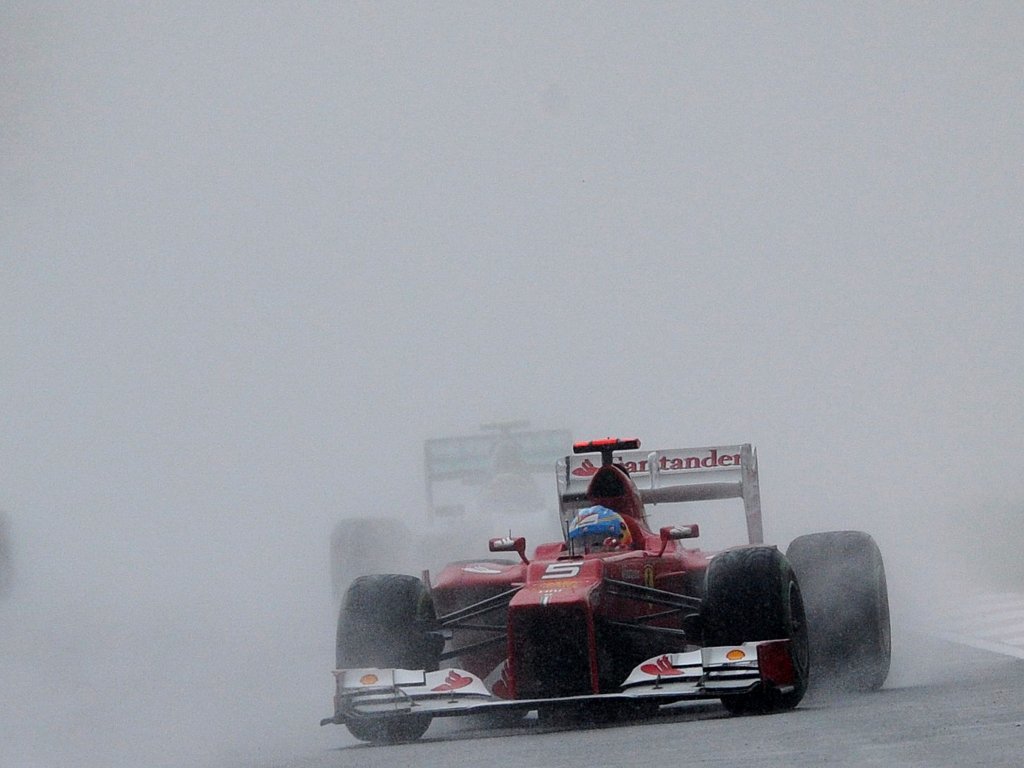 Fernando Alonso put Ferrari’s woes to one side to win the Malaysian GP, but the day belonged to Sergio Perez who finished P2…

Fernando Alonso put Ferrari’s woes to one side to win the Malaysian GP, but the day belonged to Sergio Perez who finished P2.

After all their pre-season problems and struggles in qualifying, it was a jubilant moment for the Italian outfit as Alonso came from P8 on the grid to win the rain-affected race at the Sepang International Circuit.

The plaudits, though, will go to Sergio ‘Checo’ Perez and Sauber as the Mexican put in the drive of his life to claim his first podium finish. Pole-sitter Lewis Hamilton finished a distant P3 and he was followed across the finish line by Mark Webber and Kimi Raikkonen.

Race Report
Spots of rain started to fall with twenty minutes to go before the start. Ten minutes before the start Lotus boss Eric Boullier was predicting that it would be delayed because of the increasing intensity of what was now light rain. However at the top of the hour the cars went off on their parade lap with everyone on Inters except HRT who had opted for the full wets. Only Karthikeyan got away, though and de la Rosa had to start from the pitlane.

Grosjean got ahead, but was on the edge of control. Webber got past him into Turn 4, while Schumacher was pushed into a spin by Grosjean who lost the rear end of the car at the exit of the corner. Schumi fell a long way back and Grosjean dropped down the order. At this point in the race there was very heavy rain in Sector 1 but little round the rest of the track, even so Sergio Perez decided it would be a good move to duck into the pitlane and change to full wets at the end of Lap 1.

On Lap 2, Di Resta and Bruno Senna came in for full wets, on Lap 3 Massa pitted from P10 and on Lap 4 Jenson Button led in Alonso, Hulkenberg, Ricciardo and Petrov. As the rain grew in intensity it became inevitable that everyone should move onto wets. Grosjean had spun off when his Lotus aquaplaned off the track. In came Hamilton, Webber, Vettel, Maldonado, Raikkonen, Kobayashi and Schumacher.

Button had gained time during his one lap advantage on the full wets but he still came round just behind Hamilton as he emerged from the pits.

The rain was getting heavier lap by lap with aquaplaning at Turn 5 and Jenson Button reporting: “the last sector is like a lake” referring to the standing water at Turn 12. Perez was taking full advantage of having changed to wets early and was up to an incredible P3, while Narain Karthikeyan who had started on wets was in P10 for HRT.

Around the circuit there was thunder and lightning and a power cut that dimmed the lights. On Lap 7 timing screens said the race had been red-flagged, but that was amended straight away to a Safety Car. As the SC collected everyone behind it for a lap the rain intensified, another Red Flag message came up, backed up by written confirmation from Race Control that this was a real Red Flag.

The cars formed up on the grid and drivers got out and prepared for the wait Finally at 1704 local time Race Director Charlie Whiting deemed the rain light enough to have a restart behind the Safey Car at 1714.

Because all tyres had to be wets behind a Safety Car start, Jean-Eric Vergne who had not changed from his Inters, got a free set of Wets without having to drop time for a pit-stop. The cars cruised behind the Safety Car for Laps 10, 11,12 and it came in at the end of Lap 13. Lewis Hamilton stacked the cars up on the back straight before the line. At this stage many were predicting a quick change onto Inters as the circuit rapidly dried out. Button didn’t even wait for the restart and was in for Inters along with many of the midfield – no-one else from the frontrunners.

It proved to be the wise choice because his first middle sector on the Inters was faster than anyone and at the end of the lap everyone else dived into the pitlane. Already on Lap 14 Alonso had got past Mark Webber, to take P3.