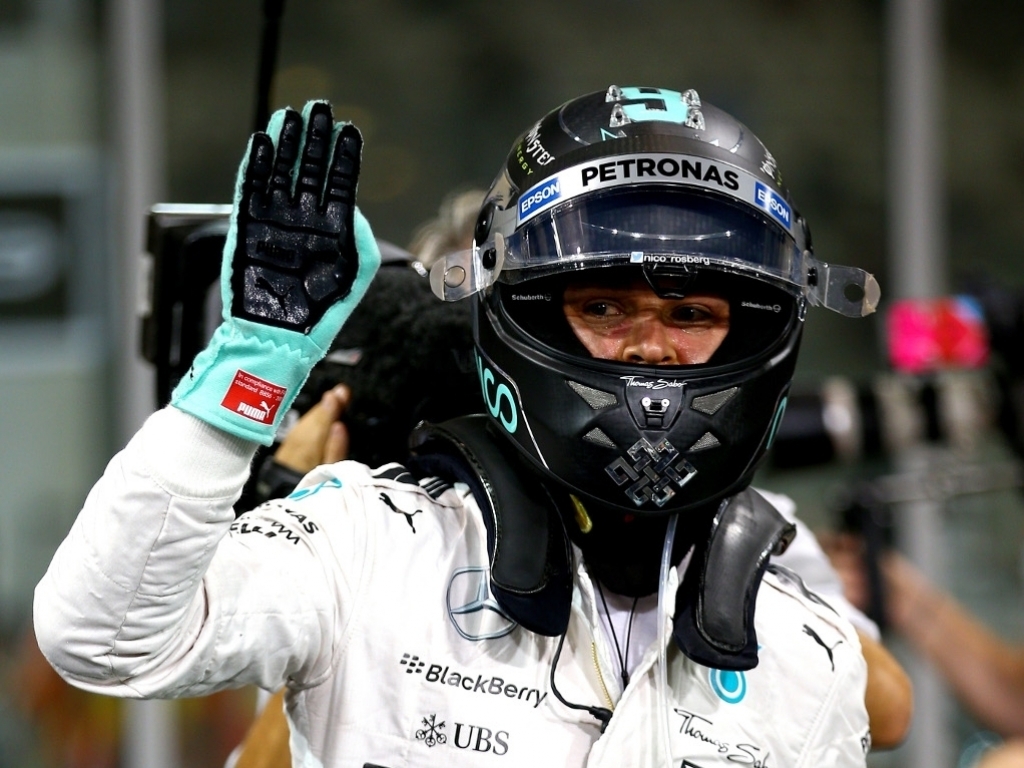 Although Mercedes did give Lewis Hamilton the alternate strategy it was pole-sitter Nico Rosberg who raced to the victory under the lights in Abu Dhabi.

A flying start from pole position coupled with a tardy getaway from his team-mate set Rosberg up the race win at the Yas Marina circuit.

The German began the grand prix from pole position, his sixth in succession, and made the most of it as he stormed off the line. Racing unchallenged he built up a lead of over five seconds only for Hamilton to fight back, reducing it to a second.

Losing time with every passing lap Rosberg pitted early – lap 32 – for a new set of softs whereas Hamilton’s middle stint was extended as Mercedes opted not to pit the drivers on consecutive laps.

The Brit asked on lap 40 whether his current tyres could make it through to the chequered flag but he was told no and he pitted for the second time on lap 41. He swapped his softs for another set of softs, coming out 13.2 seconds behind Rosberg.

Not having to worry about the longevity of his tyres Hamilton raced flat out to the end but was unable to catch his team-mate.

Rosberg claimed his third win on the trot by 8.2seconds ahead of the 2015 World Champion. It was Mercedes’ 12th 1-2 of the campaign to go with their victories in the Drivers’ and Constructors’ Championships.

Kimi Raikkonen joined the Mercedes pairing on the podium on a rather lonely Sunday night. There was a bit of concern as a slow second pit stop – Ferrari struggled with his front right – resulted in a 6.6s stop. That, though, didn’t cost Raikkonen much as he raced to third place.

Sebastian Vettel, who ran a long first stint on the softs having started P15, raced his way to fourth place. He used the supersofts in the final stint to take positions off Sergio Perez and Daniel Ricciardo, who finished P5 and P6 respectively.

Nico Hulkenberg was seventh ahead of Felipe Massa and Romain Grosjean who finished in ninth as he bid farewell to Lotus. Daniil Kvyat claimed the night’s final point.

There was drama over at Williams as Valtteri Bottas, fighting for fourth in the Drivers’ Championship, was released into the path of Jenson Button’s McLaren on his first stop. Clipping the back of the McLaren, Bottas lost his front wing and P4.

Bottas had to complete a lap with half a front wing before pitting for repairs. He rejoined down in 18th place and to add to his misery was slapped with a five-second penalty. Bottas finished the grand prix P13 and fifth in the Championship.

Meanwhile Fernando Alonso pitted after the opening lap for a puncture and a new front wing after he tangled with Pastor Maldonado. Maldonado retired while Alonso, who was handed a drive-through penalty for the incident, brought his MP4-30 home in 17th place.

Alonso had threatened mid-race to retire his car “if we don’t get a Safety Car” but in the end he stuck it out to the bitter end.