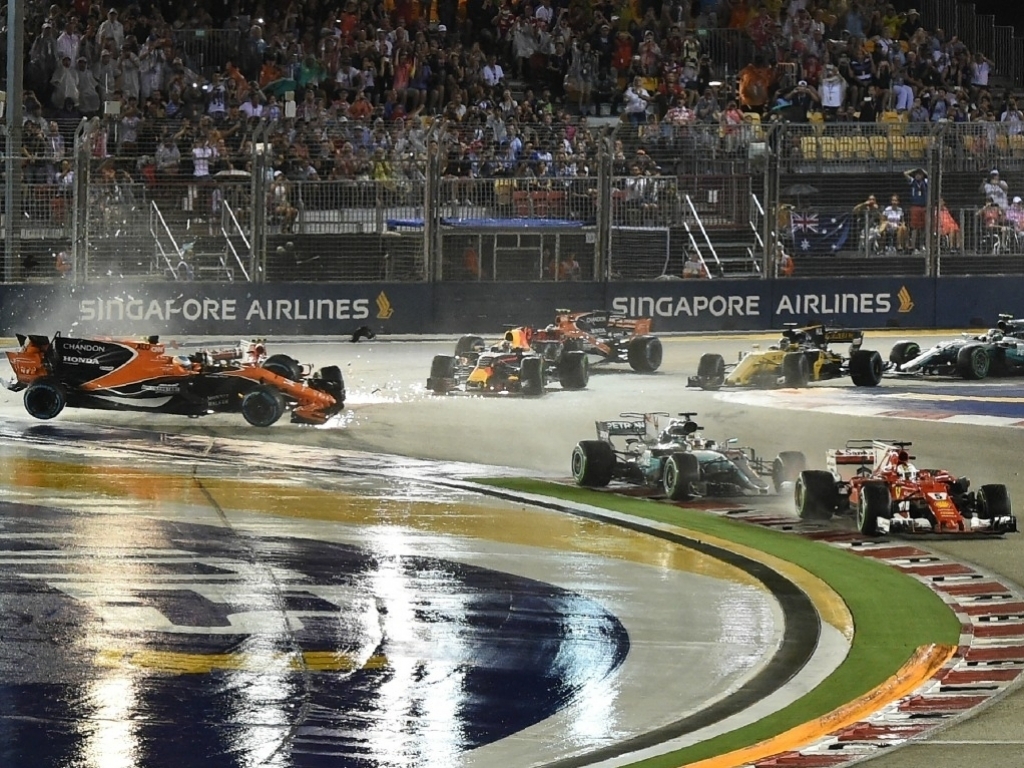 Lewis Hamilton has extended his World Championship lead to 28 points after taking full advantage of a chaotic start in wet conditions which left Sebastian Vettel’s own title bid in pieces.

Vettel, Max Verstappen and Kimi Raikkonen are all under investigation from the stewards as the Dutchman was caught in the middle of the two Ferraris and caused huge impact between all three.

Raikkonen lost his right rear and slammed into Verstappen again at Turn 1, which also collected Fernando Alonso, who retired later on.

Seconds later, Vettel, who sustained damage in the first collision, then lost his front wing and was left with no option but to retire.

It left Hamilton to breeze through all the chaos and dictate proceedings for the rest of the race which reached the two-hour limit before the full race distance was completed. Daniel Ricciardo and Valtteri Bottas went on to complete the podium.

The Marina Bay circuit was hit by heavy rain showers on Sunday morning and the threatening clouds loomed ominously above as darkness descended ahead of the race.

The rain got gradually heavier as the drivers lined up on the grid for lights out, forcing tyres to be switched to intermediates and full wets. The front three rows all opted for the former to begin with.

Once the lights went out, there was an absolute chaotic start as Verstappen was squeezed from either side by the two Ferraris, causing a huge collision on the run down to Turn 1.

Raikkonen lost a right rear tyre and, as he tried to control his car again, shunted into Verstappen once more, with the Dutchman then subsequently sent flying into the unfortunate Fernando Alonso trying to get past around the outside.

Seconds later, Vettel then lost his front wing and fluid was pouring out of the Ferrari, allowing Hamilton to negotiate his way through the carnage and storm through to the front. Vettel sparked the whole chain of the events by veering to left trying to cover the Dutchman.

With Vettel, Verstappen and Raikkonen all retired and a clean-up operation underway, the race continued under Safety Car conditions for next four laps with Hamilton leading Ricciardo and Hulkenberg up to third. Sergio Perez, Valtteri Bottas and Jolyon Palmer completing the top six.

Palmer, on full wets, caught Bottas cold on the restart and moved up to P5 with a dart down the inside at Turn 1.

The rain begin to ease, meaning the intermediates were the best tyres to be on as the race settled down.

Hamilton soon got into the groove and opened up a handsome five second advantage to Ricciardo in second. But, after Alonso retired with terminal damage and Daniil Kvyat found the wall, the Safety Car came out for a second appearance.

It sparked a flurry of pit stops with Ricciardo among those keen to swap to fresh inter tyres and others eager to ditch the full wets.

The two Renaults came into the pits a lap later, while Hamilton stayed out on the tyres he started on – a decision he questioned over team radio.

The race restarted again on lap 15, with Hamilton able to keep Ricciardo, on the new set of inters, at bay, and Bottas, who also did not pit under the Safety Car, up to P3.

The Brit soon began to stretch his lead again, despite being on used tyres, by two seconds inside one lap of the restart.

On lap 17, an almighty scrap between Magnussen, Massa and Ocon ensued for then P11 on track. Magnussen and Massa traded places before the former then squeezed the Frenchman out to stay ahead of that particular train.

The rain stopped, but the track was only slowly drying out and those who did not pit under the second Safety Car were being rewarded for doing so as those who did were not making any impression on the leaderboard.

On lap 24, Magnussen was the first to make the call to switch to slick tyres and Massa soon followed him in. With both on the purple-striped ultrasofts, the rest of the pit lane was waiting for the call to do the same.

Magnussen was soon lighting up the timesheets and that prompted plenty of activity. Ricciardo was the first of the front-runners to switch to slicks from P2 and Bottas quickly followed from P3.

All eyes remained on Hamilton, who was still finding plenty of pace on the inters before he was called in on lap 29. He re-emerged back in the race lead with a very healthy advantage.

The gap was up to 10 seconds until Marcus Ericsson drew out the Safety Car for a third time on lap 39 after crashing out on the Anderson Bridge.

The race restarted with 25 minutes left of the two-hour limit, Hamilton once again not giving Ricciardo a sniff and soon opened up a two second gap. None of the top three of Hamilton, Ricciardo or Bottas werre tempted to change again for fresher tyres.

Magnussen and Hulkenberg were late retirements, with the latter setting the unwanted record of the most race starts without a podium – 129.

But as the clock continued to tick down, Hamilton managed to dictate the pace and clinch a result that would have been beyond is wildest dreams in a race that may well prove to be the defining moment of the 2017 World Championship.