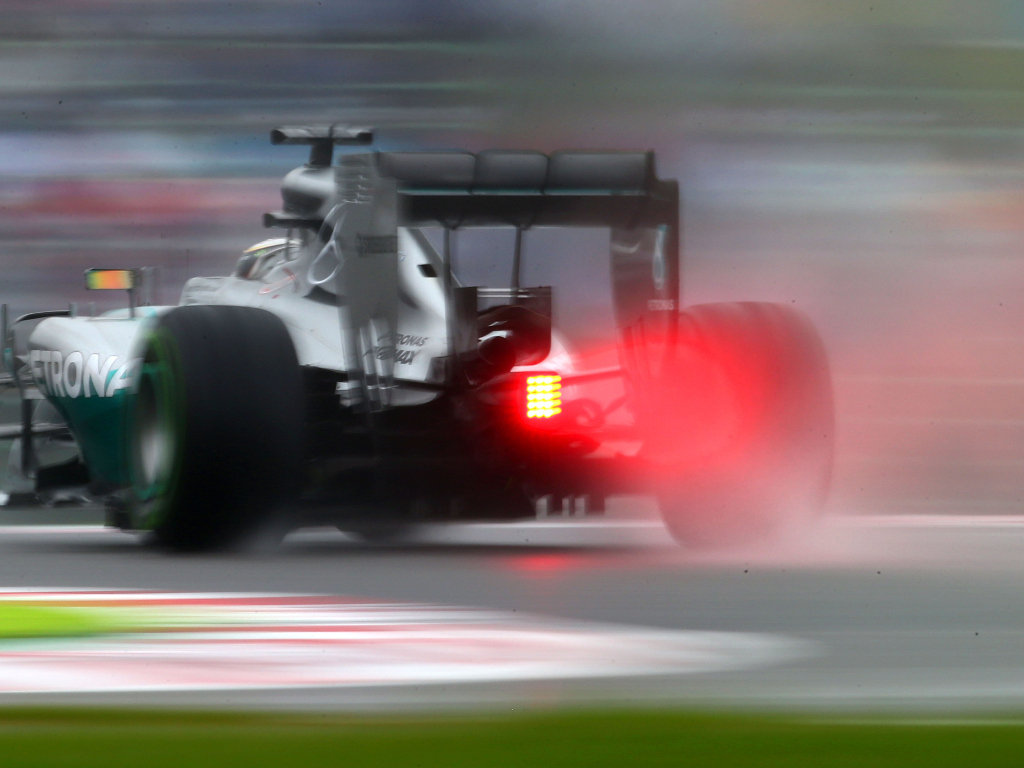 Lewis Hamilton extended his lead in the title race as he claimed the win in Japan, a race counted back to lap 44 after heavy rain and accidents brought out the red flags.

With a typhoon in the area and the rain bucketing down, Sunday’s 53-lap grand prix got underway behind the Safety Car and with all 22 drivers on the full wet Pirellis.

That, though, did not stop Marcus Ericsson from going off as he spun at the final corner on the opening lap. The Caterham driver kept the engine running and rejoined the proceedings.

With several drivers reporting aquaplanning and rivers running across the track, the race was red flagged on lap two with all 22 drivers – led by Nico Rosberg and Lewis Hamilton – pulling into the pits.

The race restarted 20 minutes later but it was over almost before it began for Fernando Alonso as his F14T broke down at Turn 5 with an apparent electrical failure.

When the Safety Car pitted at the end of lap nine, Rosberg and Hamilton stormed away from the chasing pack while Jenson Button was the first to gamble, pitting almost immediately for intermediate tyres.

With McLaren reporting that his lap times were matching the Mercs at the front, 12 cars including the two Williams, Daniel Ricciardo, Kevin Magnussen and Kimi Raikkonen all pitted. The rest of the field pitted a lap later.

Button’s early swap paid dividends as he was third behind the Mercedes drivers, who were the last two drivers to pit with Rosberg emerging ahead of Hamilton.

After that drama, the race quietened down a bit for all barring the Red Bull drivers. Sixth and seventh after the first stops, Vettel and Ricciardo sliced their way passed the Williams duo in a display of precision driving that included daring passes around the outside.

29 laps into the grand prix there was a change at the very front as Hamilton swooped by Rosberg around the outside of Turn 1 having spent more than 10 laps sitting on his team-mate’s rear wing.

Vettel kicked off the second round of pit stops as the reigning World Champion pitted on lap 30 from fourth place having failed to close the gap on Button beyond eight seconds. Button came in a lap later and needed a steering wheel change. As such his was stationary for 6.9s and came out behind Vettel on the track.

With Hamilton pulling away at the front, comfortably ahead by over 5s, Rosberg pitted before his team-mate with Hamilton coming in two laps later and Ricciardo a lap after. Round two of the pit stops ended with Hamilton in the lead by 6s over Rosberg, Vettel was third with Button fourth and Ricciardo fifth.

As the race hit the 40-lap mark, which meant full points would be awarded, the rain came down harder. Several drivers – including fifth-placed Button – pitted for full wet tyres while race leader Hamilton complained that the rain is coming heavy. He was told to just “keep it on the black stuff.”

Adrian Sutil was the first to aquaplane off the track when, on lap 43, he lost it. Surprisingly he was also the first crasher of the grand prix. A lap later the Safety Car – and the medical car – came out on track soon followed by an ambulance while news that Jules Bianchi had gone off at the same Dunlop corner as Sutil.

The race was red flagged on lap 46 with the result counted back to lap 44 with Hamilton declared the winner ahead of Rosberg. Vettel on count back, despite having pitted, finished third ahead of Ricciardo and Button.

Bottas and Massa both scored for Williams while Nico Hulkenberg, whose car broke down on lap 45, was eight ahead of Jean-Eric Vergne and Sergio Perez.

Bianchi was taken to hospital after hitting the recovery vehicle that was out for Sutil’s car.