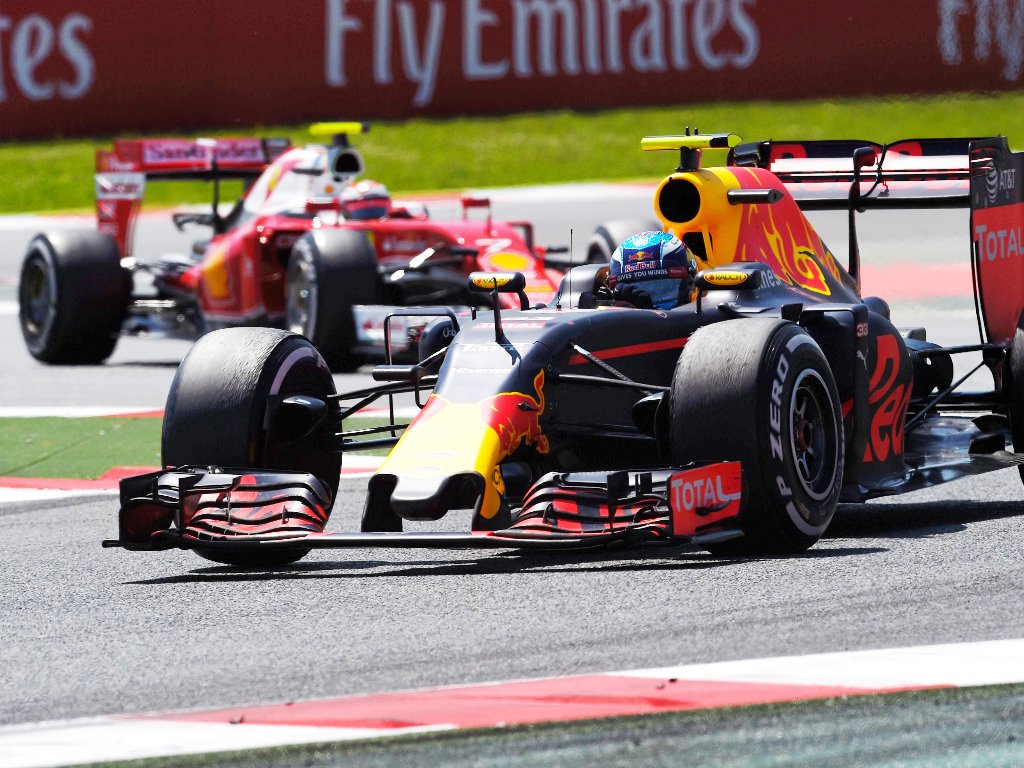 Max Verstappen made history on Sunday as he held off a challenge from Kimi Raikkonen to win the Spanish GP on his Red Bull debut, a race in which Mercedes crashed out.

Sunday’s grand prix was over before it got going for Mercedes as Nico Rosberg and Lewis Hamilton fought for the lead.

Hamilton led off the line before Rosberg swept around the outside at Turn 1 to lead the way.

The Brit tried to fight back but Rosberg refused to give him any space. Hamilton put his wheels on the grass and slid into his team-mate, putting them both into the gravel and out of the race.

With Mercedes out of the running, Red Bull and Ferrari launched into a fantastic battle for the victory.

Daniel Ricciardo led the early running as Red Bull put him on a three-stop strategy while Max Verstappen benefitted from each of his team-mates stops. Behind them Ferrari put Sebastian Vettel on a three-stopper and Raikkonen on a two.

This meant the quartet changed positions throughout their pit stops with all four leads laps at some point of the grand prix.

Verstappen was the first to make his final stop, pitting on Lap 35 with Raikkonen in a lap later. Vettel stopped for the last time on Lap 38 with Ricciardo pitting five laps later. All four on medium tyres.

It played out with Verstappen ahead of Raikkonen, Vettel and Ricciardo. The gaps between the drivers were 1.1, 6.6, 8s.

With 10 to go Raikkonen was less than a second behind Verstappen but not able to find a way through while Ricciardo was right on Vettel’s rear wing.

Vettel was also not making it easy for his former team-mate and fought off a challenge on lap 59 in which the duo traded rubber. The German was not happy: “Honestly, what are we doing; racing or ping pong?”

As the laps counted down, Verstappen continued to hold off Raikkonen and raced into Formula 1’s record books as the teenager became the youngest ever grand prix winner at 18 years. Raikkonen was second while Vettel completed the podium, Ferrari’s first double podium of this season.

Valtteri Bottas, who had a quiet afternoon, was fifth, finishing ahead of Carlos Sainz, who was briefly up in third early in the grand prix, Sergio Perez and Felipe Massa.

Jenson Button made it back-to-back races inside the points in ninth place while Daniil Kvyat was in the points for Toro Rosso, finishing P10.

Nico Hulkenberg joined the list of retirements as the back of his Force India caught fire on lap 21. He was told to “pull over near a fire marshal” and promptly did.

Fernando Alonso retired on lap 47 with his McLaren grinding to a halt at Turn 3. Alonso reported a loss of power. Romain Grosjean also failed to reached the chequered flag.