Home Uncategorized Race: Vettel back to winning form in Brazil 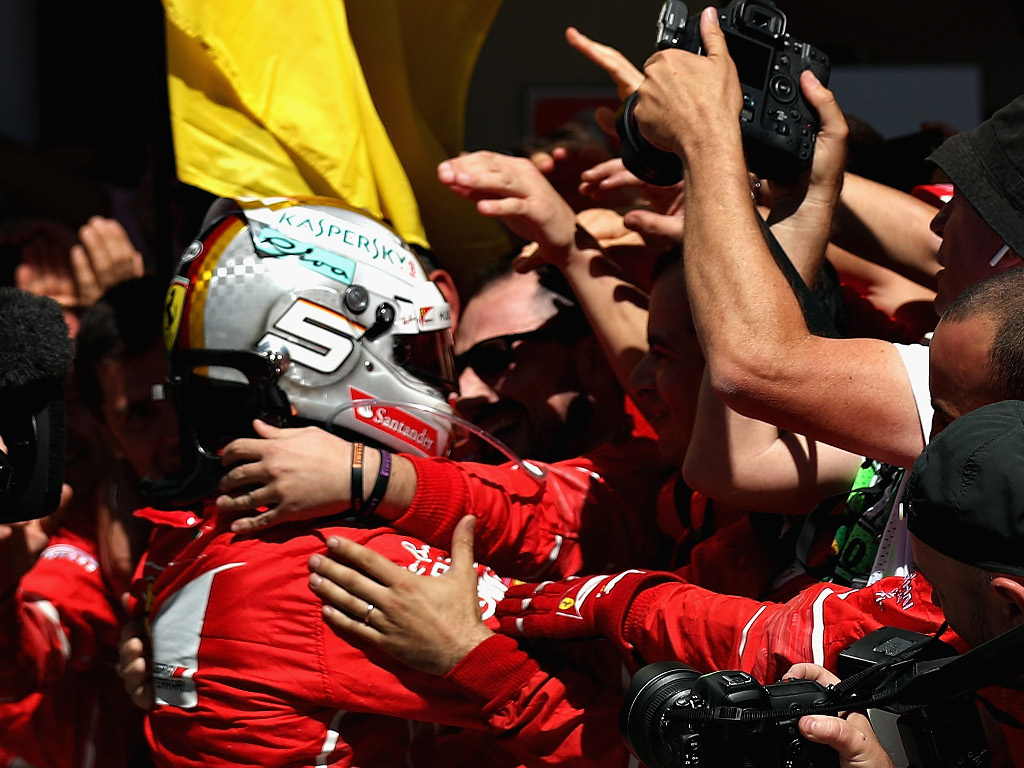 Sebastian Vettel returned to winning ways at Interlagos on Sunday, beating Valtteri Bottas as he claimed his first win since July’s Hungarian GP.

There was a bit of drama for Kimi Raikkonen on the grid with Ferrari checking his car’s electronics prior to the race. It was a telemetry issue but one that resolved itself.

His team-mate Vettel made a great start as he pulled ahead of Bottas through the first corner and held his line to lead the Brazilian GP. Raikkonen was third ahead of Max Verstappen with Lewis Hamilton, who started from the pitlane, up to P14 as the Safety Car came out on lap 1 for the various incidents.

Esteban Ocon’s run of finishes came to a crashing end as he was collected by Romain Grosjean, who was handed a 10s time penalty for causing a collision. Stoffel Vandoorne retired after contact with Kevin Magnussen pushed him into Daniel Ricciardo. The Aussie spun but able to continue. Vandoorne and Magnussen retired.

The race resumed on lap 6 with Vettel backing up Bottas and the rest of the field before pulling away with ease. The top four held station as Felipe Massa, competing in his final Brazilian GP, overtook Fernando Alonso for fifth while Sergio Perez was P7.

Ten laps in and Vettel was leading by two seconds while Hamilton was up to ninth and Ricciardo had recovered from his spin to reach P12.

Ten laps later and Vettel was 2.1s ahead, Verstappen was “stuck” in fourth, Hamilton was up to seventh after a robust pass on Perez – but 17s down – and Ricciardo had made his way inside the points in ninth place.

Hamilton’s next two overtakes were on Alonso, P6, and then Massa for P5. He was 17s down but running the soft tyres to the leaders’ supersofts meaning he would be swapping to the better tyres in his pitstop.

Bottas pitted on lap 28, triggering the undercut on Vettel, who had been just over 1.5s ahead. Massa also pitted. The early stop meant Vettel was forced into stopping. Verstappen and Alonso followed him in.

Vettel just managed to get out ahead of Bottas, the gap down to half a second. Raikkonen was the next in with Hamilton leading the grand prix on lap 29 but still needing to pit.

Hamilton continued to lead the grand prix through lap 40, 1.8s up on Vettel, who was running the soft tyres. Bottas, in third, had fallen slight off the pace, 2.9s shy of the Ferrari driver, while Raikkonen, Verstappen and Ricciardo were next in line.

Hamilton pitted on lap 43, dropping from first to fifth, with Ricciardo also coming in. He fell from sixth to eighth. Both drivers on a set of supersofts for the final 28 laps.

The stops meant Vettel was back in the lead, 2.3s up on Bottas, while Raikkonen and Verstappen were ahead of Hamilton with Massa and Alonso – who was quickly overtaken – ahead of Ricciardo.

Hamilton caught Verstappen with 12 laps remaining and took just three corners to work his way around the Red Bull racer. Five seconds behind Raikkonen, the podium beckoned as Hamilton clocked a 1:11.9 – the fastest lap at Interlagos, at least until Verstappen did a 1:11.044 – to close the gap.

The Mercedes driver reached Raikkonen’s rear wing with four laps with the Ferrari driver making him work for him. With his tyres falling off, Hamilton struggled for grip and had to settle for fourth place.

Vettel claimed the first, his first since July, ahead of Bottas to move 23 points ahead of the Finn in the battle for runner-up in the championship.

Raikkonen joined them on the podium.

Verstappen, who came in for a late second stop after complaining about tyres, was fifth ahead of Ricciardo, Massa and Alonso. Perez and Nico Hulkenberg completed the top ten.