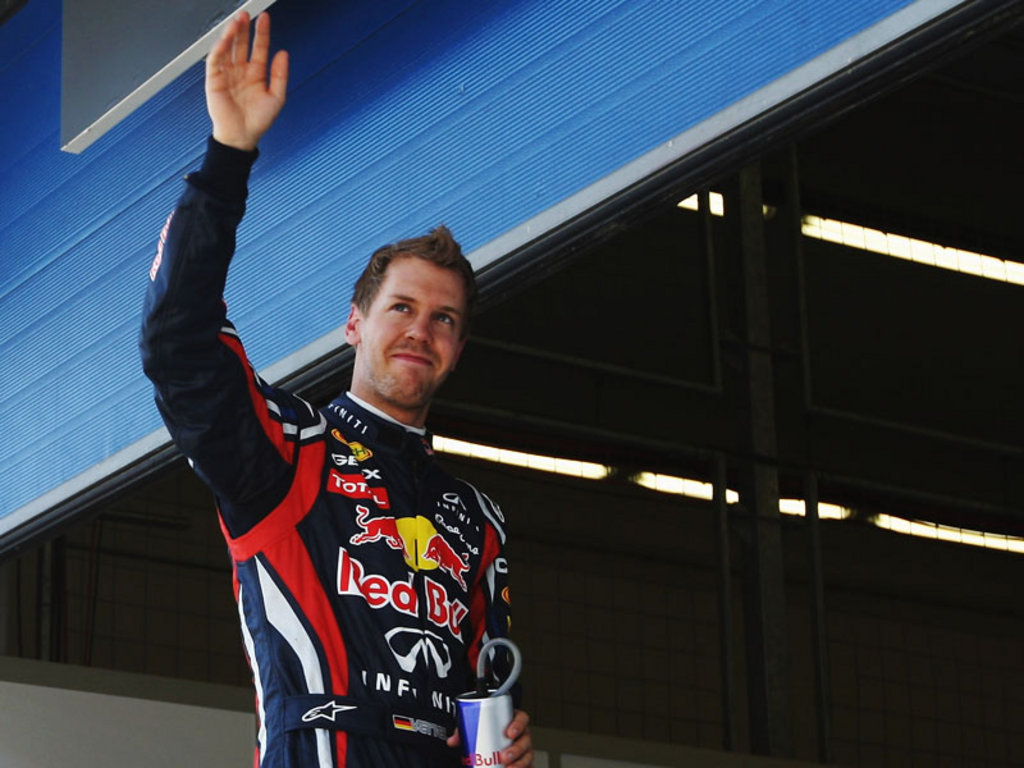 Sebastian Vettel demonstrated his maturity and Red Bull their pace as the German put in a faultless drive to take his third win of the season.

Starting from pole position, the defending World Champion had the luxury of changing from a three-stop strategy to a four-stopper mid-race. Team-mate Mark Webber was involved in a race-long duel with Ferrari’s Fernando Alonso. The Ferrari team bounced back after a lacklustre start by their standards, to grab their first podium of 2011.

Lewis Hamilton finished fourth in a dramatic race full of overtaking, ahead of Nico Rosberg and Jenson Button.

Race Report
It was bright and windy at the Istanbul Park track with bright sunshine and an ambient temperature of 17C with the track at 35C.

Start:
The Turkish GP has the most marked advantage for the cars starting on the racing line and so Sebastian Vettel was easily away in P1 in the short run down to Turn 1. Mark Webber was never going to threaten him and Nico Rosberg, starting from P3, was straight through into P2. Such was the traction of the McLaren off the line that Lewis Hamilton was able to challenge Webber for P3 and they ran side by side through the first turn.

Webber got ahead but Hamilton wasn’t finished and had another go at him before Turn 3, ran wide and lost places to both Alonso and Button. Further back, Vitaly Petrov had failed to get a good start from the clean side of the grid and Michael Schumacher was in front of him and he started to have a look at getting past Hamilton as he recovered from running wide.

The only major casualty of the first lap was Sergio Perez who returned to the pits to replace his front wing. Lewis Hamilton was clearly not happy with P6 and looked at all kinds of ways of getting past his team-mate, even having a look into Turn 8. On Lap 2 Vitaly Petrov tried to go up the inside of Michael Schumacher and the Mercedes driver pinned him hard against the apex of Turn 12.

It didn’t work, Petrov got past Schumacher and ran across his front wing, forcing the German into a very early pit-stop. Mark Webber managed to use his DRS to good effect on Lap 5 to claim P2 off Nico Rosberg, while Fernando Alonso was in close attendance.

A couple of laps later and it all began to kick off between Jenson Button and Lewis Hamilton. Lewis breezed past into Turn 12 on the back straight using DRS, Jenson took the inside line into Turn 13 and overtook Lewis on the start/finish straight, then Hamilton dived up the inside into Turn 1 to take the place back off him. It was almost a carbon copy of the moves from last year.

Only this time we had a different ending. Two laps later Jenson did to Lewis on the start/finish straight what had been done to him and he was through. In between that time, on Lap 7, Fernando Alonso had finally got past Nico Rosberg. Rosberg was able to deploy his KERS to keep the Ferrari driver back, but as his rear tyres gradually blistered so Alonso made an easy pass.

Lewis’s tyres had gone off by now and on Lap 9 Felipe Massa overtook him into Turn 12… and then they both dived into the pitlane. McLaren were quicker at getting Hamilton out and as he got back into the pitlane, Felipe Massa was only just released. They ran side by side for a little while with Massa just behind Hamilton, then the Ferrari driver realised the inevitable and dropped behind.

It was unquestionably an unsafe release in terms of distance between the cars, but because of the proximity of the garages, Hamilton wasn’t actually in the pitlane when the Ferrari was released and the stewards must have ruled that this was a key factor.

A lap later and Alonso, Webber and Rosberg pitted – on course for a four-stop race. By Lap 10 only Vettel and Button of the top eight cars hadn’t pitted. Behind them the Renault team-mates were having a bit of a ding-dong; Nick Heidfeld overtook Vitaly Petrov just after Turn 12 but instead of Petrov leaving him space, he drove out wide, banged Heidfeld’s wheels and almost pushed him into the pitlane. While waving his hand at him! It was an amazing act of F1 stupidity, but just like the earlier Petrov vs Schumacher incident, it failed to be investigated by the stewards.

Vettel pitted on Lap 11 and Jenson Button finally pitted at the end of Lap 13 after beginning to lose a lot of pace to the early stoppers. At this stage only 0.4 separated Nico Rosberg, Lewis Hamilton and Felipe Massa. On Lap 15 Hamilton was able to use his DRS to overtake Rosberg into Turn 12 even though Rosberg pushed him a long way towards the grass. Massa would need another five laps to get past – a fact that would contradict the argument that the DRS zone is making overtaking too easy.

On Lap 18 Fernando Alonso was proving that the new ‘step’ in performance was genuine and effective, pulling a long way clear of Lewis Hamilton and faster than P2 man Mark Webber. Jenson Button closed up on the battle for 5th and 6th between Rosberg and Massa. Massa then overtook Rosberg on Lap 20 into Turn 9 (before the DRS zone). Rosberg then steamed past him again on the same lap into Turn 12 and defended successfully through Turn 13.

On Lap 21, Massa made it past Rosberg again going into Turn 12 and Jenson Button tried to follow him through. Jenson was on the inside as they ran side by side through Turn 12 and 13. Jenson then switched lines and fainted to dive through on the inside, Rosberg covered it and Button drove round the outside. It was the overtaking move of the race.

Button then pressed Massa hard. On Lap 24 Button passed the Ferrari driver into Turn 12 and Massa locked up badly, massively flatspotting a front tyre just before he dived into the pits for a stop (the best time to flatspot them).

Button pitted for the second time on Lap 26 of what was clearly going to be a three-stop race now. This put him back out between the familiar figures of Massa (in front) and Rosberg (behind). Rosberg was labouring on the hard tyres before he could be released onto the softs for the final sprint.

Fernando Alonso used the DRS for an uncomplicated pass of Mark Webber on Lap 28 into Turn 12, the Red Bull driver choosing not to fight too hard. Lewis Hamilton, still on softs, began to catch Webber, but the gap was close on twenty seconds.

The four-stoppers soon started coming in for their third stops. Rosberg was in on Lap 33, Hamilton, Petrov and Massa on Lap 34. Lewis Hamilton had a front right wheel jam and it delayed him significantly, though ultimately didn’t lose him any places. It didn’t help that at the end of the delay he couldn’t get away because Massa was coming in to his pitbox. This put Jenson in front of Lewis on the road. Felipe Massa ruined his own race on Lap 35 by running wide at Turn 8 and losing places to a packed midfield

Webber and then Alonso pitted in the subsequent laps. Stopping later than both of them Sebastian Vettel had the opportunity to three- or four-stop. He ultimately waited till Lap 40 for his third stop and Button till Lap 39.

Nico Rosberg kicked off the final round of pit-stops on Lap 44, followed by Mark Webber, Alonso, Lewis Hamilton and Sebastian Vettel on Lap 47. Vettel had spent just seven laps on his hard tyres and could have run till the end but chose to cement his advantage and not risk his tyres ‘going off a cliff’.

Button was a massive 30 seconds behind Webber, but on old tyres till the end of the race he was a sitting duck to Hamilton only 2.3 seconds behind and Rosberg 4.4 behind Hamilton. Lewis duly passed his team-mate on Lap 50 without drama.At the same time Mark Webber got onto Fernando Alonso’s tail on Lap 51 going into the DRS zone.

The two cars ran side by side through the Turn 12/13/14 complex with Webber almost running wide but holding the advantage and Alonso tight behind him on the following start/finish straight. Mark had to go defensive covering the inside of Turn 1 as Alonso piled on the pressure. He almost got past going into Turn 3 but Webber held on and got far enough in front to avoid suffering a DRS re-pass – and was clear

Nico Rosberg passed Button without any kind of battle on Lap 54 and in the closing stages both Renaults managed to catch and pass the three-stopping Sebastian Buemi. Sebastian Vettel cruised to his third win of the year and Red Bull got the 1-2 result they should have had in 2010.

Fernando Alonso was just 10 seconds away at the line and scored Ferrari’s first podium of the year. Later he would claim that getting stuck behind Rosberg at the start of the race ruined his chances of challenging for the win, a valid point – although Vettel seemed to spend much of his race adjusting his strategy through his rearview mirrors.

Hamilton scored a very distant fourth place with Rosberg not quite believing that all the strategy changes had got him up to fifth place again in front of Jenson Button. Had Button stopped when he was in front of Rosberg he would have kept fifth.

It was a dramatic race with 73 pit-stops, the most in a purely dry F1 race (Donington 1993 had been wet/dry) and only one mid-race retirement – Paul Di Resta. The Red Bulls march on, but the competition for the podium places is really kicking off.
FH