Home Uncategorized Race: Vettel Does It Again In Japan 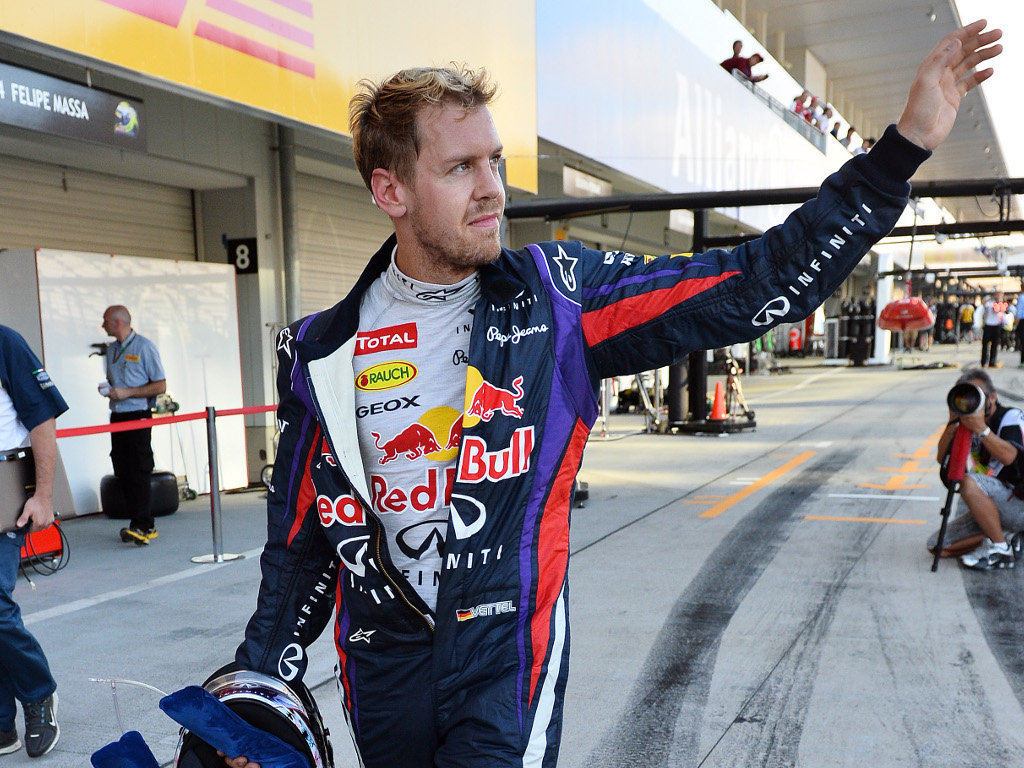 Unlike in previous weeks, the Red Bull racer did not have it all his own way as Romain Grosjean controlled the race for 29 laps, but his race was compromised by having to fend off the split strategies of two-stopping Vettel and three-stopping Webber

Fernando Alonso brought his car home fourth ahead of Kimi Raikkonen to keep the championship mathematics alive while Esteban Gutierrez scored his first points for Sauber in P7.

It was an eventful afternoon for Mercedes who suffered one puncture and caused another on their way to a solitary P8 for Nico Rosberg.

Massa took his drive- through after Ricciardo and dropped to P11 promoting Raikkonen who was now catching Alonso in front.
Vettel looked after his tyres very well and could run all the way till Lap 37 before pitting for more Hard tyres that would take him to the end of the race. He closed Grosjean down quickly and passed him using the DRS into Turn 1 on Lap 41. This now made the order: Webber, Vettel, Grosjean – but Mark was in for his third and final stop on Lap 42 and rejoined in third place.
The question now was, could Mark race, overtake Grosjean and close up to Vettel in the last few laps of the grand prix? Perez dropped down the order after Rosberg clipped hus tyre going into the final chicane, forcing the Mexican driver back into the pits and losing him a points finish.
Positions on Lap 43: 1.Vettel, (3.6 seconds clear)2.Grosjean (4.2 seconds clear), 3.Webber, 4.Hulkenberg, 5.Alonso, 6.Raikkonen, 7.Gutierrez, 8.Massa, 9.Rosberg, 10.DiResta, 11.Button, 12.Sutil
Fernando Alonso finally found a way past Nico Hulkenberg on Lap 46 as Webber closed on Grosjean, but despite the RBR9 having the faster Medium tyre for the final stint Grosjean was able to defend going down the main straight and held Webber off. In the laps from 47 to 51 Webber lost the opportunity to get anywhere close to Vettel. A couple of time he looked at a pass going into the entry of Spoon corner.
Nico Rosberg, who had four trips down pitlane and three tyre stops managed to get past the two-stopping Felipe Massa for P8 on Lap 47 as (also three-stopping) Jenson Button managed a pass round the outside of Paul DiResta into the final chicane.
Webber finally made a DRS pass on Grosjean on Lap 52 while behind him Kimi Raikkonen made another remarkable overtaking move going round the outside of Nico Hulkenberg for P5 into the final chicane, not the easiest of passes but the Sauber driver left him room. It was too late for Kimi to close the gap to Alonso in front,
Button had rapidly caught the fading tyres of Felipe Massa and though Massa blocked him into the chicane, Jenson cruised past him on the following straight with better traction, to take P9.
Rosberg had caught Esteban Gutierrez in the final few laps but Mercedes had gone marginal on fuel to compete with the Red Bulls and so Nico didn’t have the ability to change his engine mapping to something more fuel-rich. Once over the line at the chequered flag he parked the car.
Sebastian Vettel duly brought his Red Bull home for his fourth win in five years, his ninth win of 2013 and his 35th overall. It was Red Bull’s second 1-2, the first since Malaysia. Mark Webber was left to consider the data and his early tyre stops having been forced onto a three-stopper by wear in the first stint.
Romain Grosjean, who had led for over half the race laps, was the star performer in P3, having a year earlier punted Webber off ignominiously at Turn 2. Alonso was a very distant P4, Raikkonen a heroic P5, Hulkenberg P6 and Esteban Gutierrez scored his first championship points in P7.
Rosberg’s drive-through had cost him a better place than P8, while Button’s end to the race was a lot better than his first two stints in P9. Massa came home in P10.
It may have been a predictable result, but the race had hung in the balance as the strategies unfolded. Vettel had run wide and locked up more than usual but he had still come home in P1 and all this without Adrian Newey’s attendance on the pitwall for the second race running.
FH