Home Uncategorized Race: Vettel takes the win, not the title 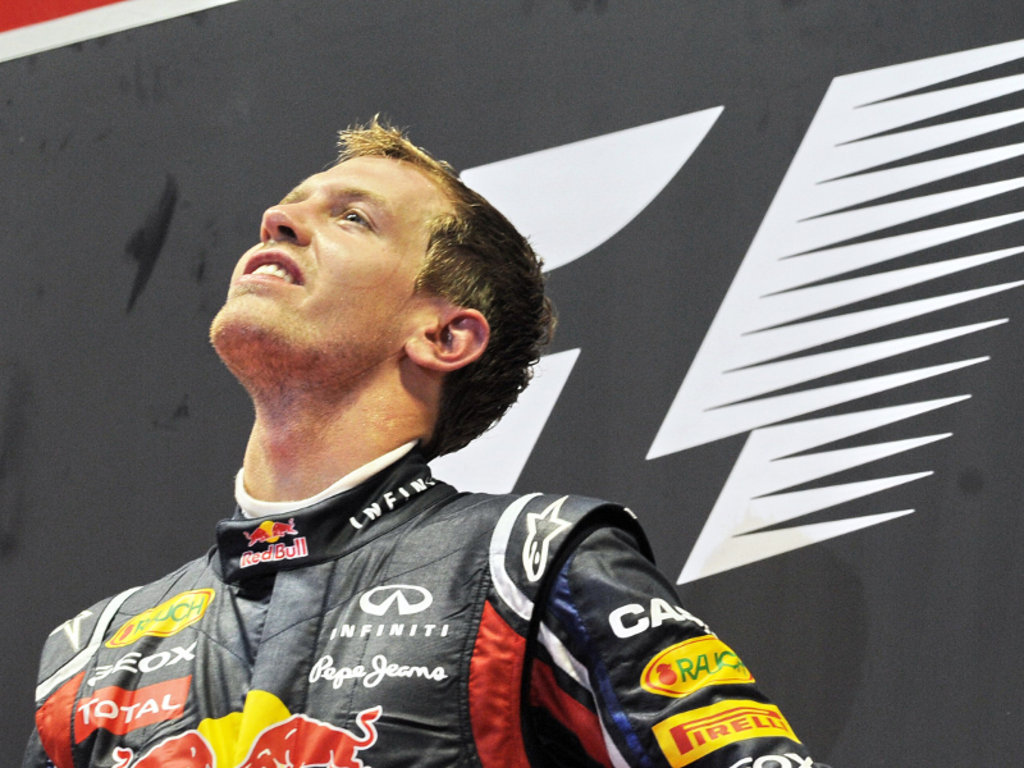 Sebastian Vettel stormed to his ninth victory of the season, dominating the Singapore GP from lights to flag…

Sebastian Vettel stormed to his ninth victory of the season, dominating the Singapore GP from lights to flag.

The Red Bull driver was flawless,however his Singapore win left him a single tantalisng point short of his second World Championship. Jenson Button finished second with Mark Webber third. A disappointed Fernando Alonso, two-time winner of the race, could only manage fourth place.

Meanwhile, the drama of the race was caused by Michael Schumacher crashing into the back of Sergio Perez, sending his Mercedes airborne and bringing out the Safety Car. Thankfully Schumacher was not hurt.

Race Report
It was warm and humid in Singapore with an ambient temperature of 31C and the track at 34C.

Start:Both McLarens had great starts, but with such a short run down to Turn 1 there wasn’t much space to take advantage of it. Jenson Button was immediately in front of Mark Webber. Lewis Hamilton tried the inside line on Webber but was squeezed to the inside by the Red Bull which allowed Alonso past Webber and Massa past Hamilton. In fact getting off the throttle was so bad for Lewis that he lost a place to Nico Rosberg and later in the lap Michael Schumacher.

Felipe Massa, with Rosberg on his outside at Turn 1, left no room and pushed the Mercedes driver onto the run-off tarmac. Rosberg rejoined behind Massa and so wasn’t penalised. Massa wasn’t penalised either for forcing him off the road, though it looked a questionable move.

Vettel took off like a proverbial scalded cat and after two laps had a 3.5 lead over Jenson Button. By Lap 6 that was up to 8.2 seconds. In the meantime, Lewis Hamilton carefully picked his way past the two Mercedes drivers courtesy of the DRS zone between Turn 5 and started to close on Massa.

Mark Webber was closing on Fernando Alonso but reported back that his KERS was only working intermittently. Paul Di Resta, the leading driver who had opted to start on the Soft tyre, was keeping up with Force India team-mate Adrian Sutil on the SuperSofts.

Jenson Button was only able to lose the attentions of Fernando Alonso very slowly in the first stint but gradually the gap opened up and he came under pressure from Mark Webber. Webber managed a storming pass on Alonso on Lap 10 going into Turn 15, but it was clear that his tyres were going off because the lap before he had lost two seconds to Jenson Button in front.

Alonso and Schumacher both came in for tyres (Rosberg having started off the pit-stops for tyres on Lap 9). On Lap 11 Massa looked like he was holding Hamilton up, but they both came in for tyres at the end of the lap. They set off together and on lap 13, Hamilton tried to go round the outside into Turn 7. Massa was having none of it and closed the door and took the line for the corner. Hamilton misjudged how far the Ferrari was in front and clipped his rear tyre as he pulled into line. The result was a broken front wing for Hamilton and a puncture for Massa. The stewards investigated and decided that Hamilton’s clip was an avoidable collision.

Positions after Lap 16
1.Vettel, 2.Button, 3.DiResta (not stopped) 4.Alonso, 5.Webber 6.Rosberg, 7.Perez (not stopped) 8.Schumacher, 9.Sutil, 10.Kobayashi (not stopped), 11.Trulli (not stopped). At this stage of the race Felipe Massa was in 17th place and Lewis Hamilton back in 19th having served a drive-through penalty.

Paul Di Resta finally pitted from 4th place on Lap 19 and exited the pits in P8 in pursuit of his team-mate.

Lewis Hamilton may have dropped behind Felipe Massa with his woes, but he was reacting a lot better and by Lap 23 he had passed the Brazilian when Massa made an error under acceleration. An easy pass. Nico Rosberg had already kicked off the second round of pit-stops on Lap 22. By the time Alonso pitted on Lap 26 Hamilton was already up tenth place.

On Lap 29 Nico Rosberg ran wide onto the marbles and was passed by Sergio Perez. Rosberg was having none of it and even though he was half a car length back tried a move into the chicane that saw him hit Perez’s rear wheel and push him onto the run-off. The impact lost the Mexican time and Rosberg took the place. (Thought he stewards looked at the incident theys aw nothing wrong with it)

An aggrieved Perez then came under pressure from Michael Schumacher the following lap. Schumacher couldn’t find a way past into Turn 7 then went to dive up the inside of Perez and found the Sauber driver lifting off unexpectedly early. Schumacher’s car hit his rear tyre and was launched in a lower speed, lower height version of Mark Webber’s accident in Valencia (with Kovalainen) but got out of the car unhurt.

It immediately brought out the Safety Car and a myriad of hastily scheduled pit-stops. When the field was released at the end of Lap 33 the positions were: 1.Vettel, 2.Button, 3.Alonso 4.Webber, 5.Di Resta 6.Rosberg, 7.Sutil, 8.Perez, 9.Hamilton 10.Maldonado, 11.Massa, 12.Buemi

After the re-start there were a great number of lapped cars in the line-up and Vettel, Button, Alonso and Webber carved their way through. However the great number must have caught Fernando Alonso off-guard as Mark Webber did a cheeky little overtaking move on him into Turn 10 to take P3 on Lap 34.

Lewis Hamilton made his way in turn past Perez, Sutil, Rosberg and DiResta who were all trying to take their tyres to the end. Lewis was on Supersofts and was chasing down Fernando Alonso’s fourth place. When his tyres went off – with Alonso just 12 seconds down the road – he had to come in for more and had to pass the same drivers all over again to get back to where he started – in fifth. Alonso, pitted from fourth and stayed fourth.

In the closing stages of the race the only battle was between a gungho Jenson Button and a conservative Sebastian Vettel. With a number of Fastest Laps Button got the gap down to the leader from 9.6 seconds on Lap 54 to 3.7 seconds on Lap 58. Backmarkers intervened, especially two squabbling Williams drivers, and the chance to close up was lost. Even so, Button was back to 6.5 seconds behind on the penultimate lap – Lap 60 – and at the line it was just 1.7 seconds. Mark Webber finished a distant third, Alonso, a distant fourth and Hamilton twelve seconds further back in fifth.