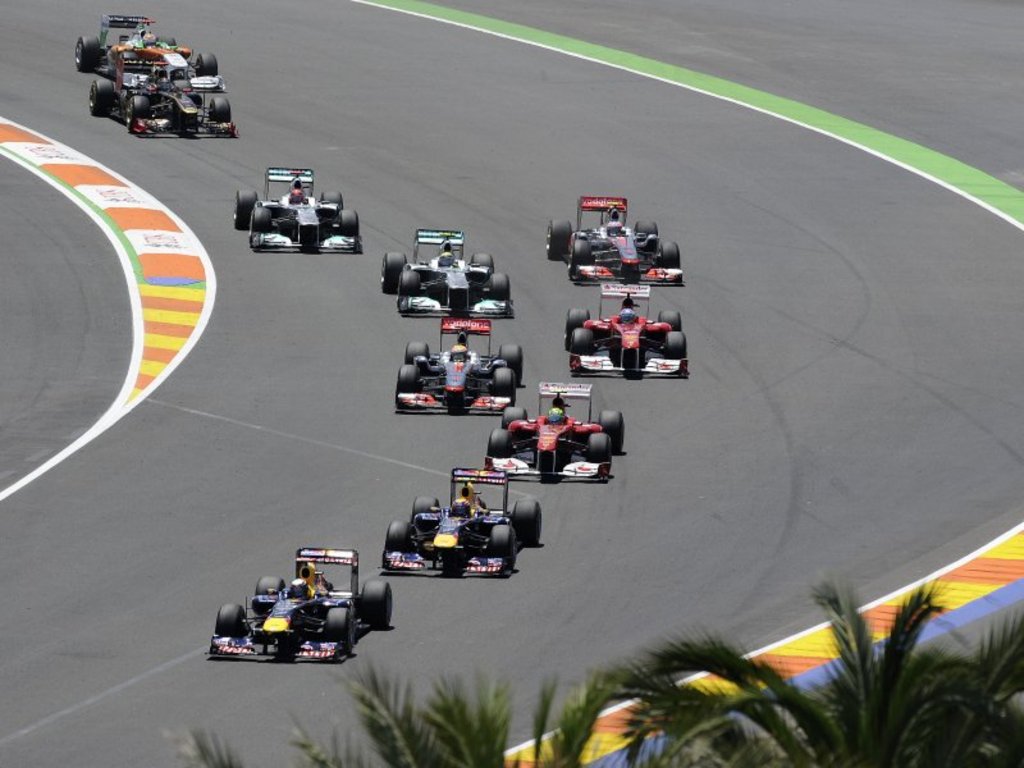 Sebastian Vettel scored his sixth win of the campaign in the European GP where the fight at the front resembled F1 of seasons past.

Despite a double DRS zone, Pirelli tyres and KERS the Valencia street circuit proved resistant to providing an exciting race. Vettel came home in front of Fernando Alonso and Mark Webber with Lewis Hamilton a distant fourth.
24 drivers completed the grand prix, the highest number ever to finsh an F1 race.

Start: As the lights went out it was Lewis Hamilton in P3 who got a bad start while the two Red Bulls in front managed to get away cleanly, under no threat from the McLaren.

The man on the move was Felipe Massa who got another blinding start from P5 and was up between Hamilton and team-mate Alonso into P3 very quickly. He looked to go up the inside of Mark Webber and take P2 into the first corner. Webber moved across to cover but left a gap wide enough for the Ferrari. Massa thought better of diving into it.

As he wavered he was overtaken around the outside by Fernando Alonso who was easily past Hamilton and swept into P3 via a trouble-free outside line. It all looked so simple. Hamilton dropped back into P5 with Rosberg in P6 who got up the inside of Jenson Button who had to give way to the Mercedes driver.

Further back everybody kept their front wings intact and nobody had to head off to the pitlane.
Lap 1 Positions: 1.Vettel, 2.Webber, 3.Alonso, 4.Massa, 5.Hamilton, 6.Rosberg, 7.Button, 8.Schumacher, 9.Sutil, 10.Heidfeld, 11.DiResta, 12.Barrichello, 13.Kobayashi

Straight away Nico Rosberg started to drop back from the front runners and by Lap 4 was 4.2 seconds behind fourth place Hamilton. By Lap 6 Jenson Button was through and past him, easily outbraking him into Turn 2. Ironically this wasn’t a DRS zone. In Valencia the DRS zones were relatively ineffective, allowing cars to close up, but rarely pass.

At the front, the Ferraris were hanging on to the Red Bulls with Lewis Hamilton not far away either. On Lap 8 just 6.7 seconds covered the top 5. Jenson Button had lost touch with the top five having taken so long to get past Rosberg and even when past him wasn’t able to close on them in free air.

On Lap 13, Lewis Hamilton, Nico Rosberg and Adrian Sutil pitted for tyres. A lap later, Mark Webber pitted but both Ferraris stayed out. At the end of Lap 15 Vettel, Alonso, Button and Schumacher came in.

While they were on in-laps and outlaps Lewis Hamilton had the hammer down. It looked like Ferrari had left Felipe Massa out too long, and so it proved. He emerged from the pitlane substantially behind Hamilton now back in P5 with Jenson Button still P6.

Cameras switched to Michael Schumacher’s front wing which was floating loose – replays showed that he had emerged from the pitlane and tried to go up the inside of the earlier-stopping Vitaly Petrov. Petrov got to the apex of Turn 2 first and drove over the front of Schumi’s front wing – in much the same way as he’d done in Turkey. Stewards would investigate but no action was taken.

Webber’s early stop had given him a distinct advantage over Sebastian Vettel and he’d closed up to less than two seconds behind but on Lap 17 he came across an HRT just after Turn 17 and lost a whole second in four corners. He waved angrily but didn’t get the time back. Vettel was tantalisingly out of reach now.