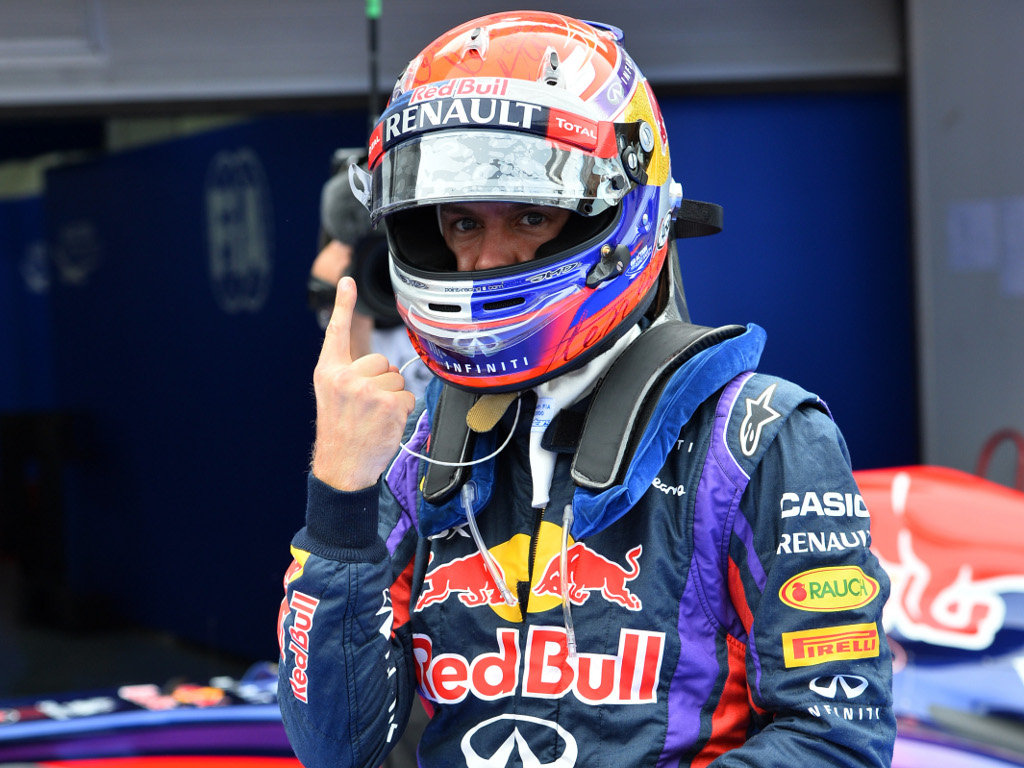 It was a much closer race than last time out in Singapore, with two Safety Cars – the first for tyre debris from an exploding McLaren tyre and the second after his team-mate’s RBR car caught fire

Kimi Raikkonen used the Safety Cars to stretch out what might have been a three-stop race for him into a two-stopper and finish in front of team-mate Romain Grosjean. Competition from Lewis Hamilton and Fernando Alonso failed to materialize after the Brit lost places at key moments at the start and at a restart, while Alonso’s Ferrari didn’t have the pace to challenge.

Nico Hulkenberg used his Sauber’s superior straightline speed to keep in front of both of them and Nico Robserg to finish in P4, with Hamilton P5, Alonso P6 and Rosberg P7.

Race ReportThe much-anticipated rain failed to turn up in Mokpo but we still had leaden skies and an ambient temperature of 27C with the track at 29C. Everyone would start on the SuperSoft tyres with the exception of Daniel Ricciardo who started on the Medium (Prime) tyre.
Grid: 1.Vettel, 2.Hamilton, 3.Grosjean, 4.Rosberg, 5.Alonso, 6.Massa, 7.Hulkenberg, 8.Gutierrez, 9.Raikkonen, 10.Perez, 11.Button, 12.Ricciardo, 13.Webber, 14.Sutil, 15.DiResta, 16.Verne, 17.Bottas, 18.Maldonado, 19.Pic, 20.van der Garde, 21.Chilton, 22.Bianchi
As the lights went out both Vettel and Hamilton got great getaways, and were followed through Turn 1 by Grosjean. It was behind them that chaos reigned. It was five abreast going down the long straight into Turn 3 in the battle for fifth, sixth, seventh, eighth and ninth. Felipe Massa spun his Ferrari around tapping the back of team-mate Fernando Alonso who had been boxed in behind Nico Rosberg’s Mercedes off the line. Alonso escaped without damage but Massa’s spin put him at the back of the field.
Romain Grosjean had already got the tow from Lewis Hamilton and was able to outbreak him and snatch P2 into Turn 3 on the opening lap. Meanwhile, Jenson Button narrowly avoided crashing into the back of Sergio Perez as he locked up and took the place at the next corner. However it was the Williams of Pastor Maldonado who made the most amazing first lap charge, through from P18 to P9.
Positions at the end of the first lap: 1.Vettel, 2.Grosjean, 3.Hamilton, 4.Rosberg, 5.Hulkenberg, 6.Alonso, 7.Ricciardo, 8.Raikkonen, 9.Maldonado, 10.Button, 11.Perez, 12.Webber, 13.DiResta, 14.Gutierrez, 15.van der Garde, 16.Vergne
Apart from Massa, Esteban Gutierrez went backwards from 8th to 14th and Adrian Sutil’s contact with another car sent him back to P18. In the opening melee caused by Massa’s spin, Gutierrez had run over Jenson Button’s front wing and he would soon need to pit for it to be replaced.
Sebastian Vettel set about opening his traditional gap to the cars behind. By Lap 2 it was 2.6 seconds, but after that Grosjean pegged him back and on Lap 5 it was still only 2.7. Both Mark Webber and Kimi Raikkonen had started out of position for the speed of their cars – Webber through a grid penalty and Raikonen through a mistake in Q3 and they both started to pick off the cars in front. Webber was past Perez for P11 on Lap 3 – which immediately became P10 when Button headed for the pits on Lap 4 to get his front wing replaced.
Webber cruised past Maldonado on Lap 6 and Ricciardo on Lap 8, with Kimi having passed the Toro Rosso driver four laps earlier. By Lap 9 Kimi made a hard-fought pass on Fernando Alonso through Turn 3 to take P7. This was a rarity indeed because now Fernando Alonso was lower than the grid position in which he’d started.
At the end of Lap 10, Lewis Hamilton and Fernando Alonso pitted – Alonso had locked up badly on Lap 4 and was making no progress. At the pitlane exit his Ferrari wobbled as it was launched off the ramp that exits between the newly profiled pitlane exit and the track. This stop kicked off a whole round of pit-stops from the front-runners. A lap later and Grosjean, Rosberg, Hulkenberg and Perez were in. A lap after that it was Vettel and Raikkonen – which left Mark Webber in the lead. He then pitted the following lap.
The pit-stops had brought Lewis Hamilton much closer to Romain Grosjean, but the Mercedes couldn’t get past the Lotus on the 1km straight. A lap later and there was some heated action between Paul DiResta and Sergio Perez, the Mexican seeming to push the Force India driver off track – something the stewards would take a look at.
Having started on the medium tyres Daniel Ricciardo had been elevated up the order but he was losing time to all the cars around him and on Lap 12 he put in a 1:49 compared to the front runners’ 1:45s.
Positions on Lap 13: 1.Vettel, 2.Grosjean, 3.Hamilton, 4.Ricciardo (not stopped), 5.Rosberg, 6.Hulkenberg, 7.Alonso, 8.Raikkonen, 9. Webber, 10.Button, 11.Maldonado, 12.Perez, 13.DiResta, 14.Gutierrez, 15.Massa
The shake-out of the pit-stops had re-asserted Alonso in front of Raikkonen, with Webber in close attendance – these three all got stacked behind the slower Nico Hulkenberg. The Sauber driver was very fast in the opening sector of the lap where all the overtaking takes place and so was able to maintain the place even though he was falling off the back of Nico Rosberg in front of him.
Rosberg was finding it hard to catch up with Daniel Ricciardo in front of him, despite having tyres that were 11 laps fresher, but he finally made his move on Lap 18 after which Daniel pitted and rejoined in P13.
At the front, Sebastian Vettel wasn’t sprinting away with it and had only a 4.1 second lead over Grosjean with Hamilton a further 1.5 back. Alonso tried taking a look at Nico Hulkenberg on Lap 20 but couldn’t get through. By Lap 21 Hulkenberg was losing a second a lap to the cars in front of him.
Positions on Lap 21: 1.Vettel, 2.Grosjean, 3.Hamilton, 4.Rosberg, 5.Hulkenberg, 6.Alonso, 7.Raikkonen, 8. Webber, 9.Button, 10.Maldonado, 11.DiResta, 12.Ricciardo
Button pitted at the end of Lap 22 having run 18 laps on the Medium tyre and it looked a certainty that he would have to stop again in the 55-lap race.
On Lap 23, all of a sudden Hamilton was 4.0 seconds behind Grosjean having been 2.1 behind on lap 21. He had been 13.0 seconds clear of Rosberg on Lap 20 and by Lap 24 it was down to 8.1 and although he complained that his tyres were going, his engineer told him they were going through the graining phase. Lewis replied: “They’ve been through the graining phase and they’re dead!”
Despite dropping bundles of time Mercedes didn’t want to bring him in reckoning that he couldn’t last till the end of the race on his next set, so Hamilton started to drop even more time. On Lap 25 Sebastian Vettel set the Fastest Lap at 1:43.986 while Hamilton put in a 1:47.3.

There have now been eight Safety Cars in four races at Yeongam, whether we will come back again to see if we can add to that impressive total is almost as likely as Vettel losing his grip at the top.
FH