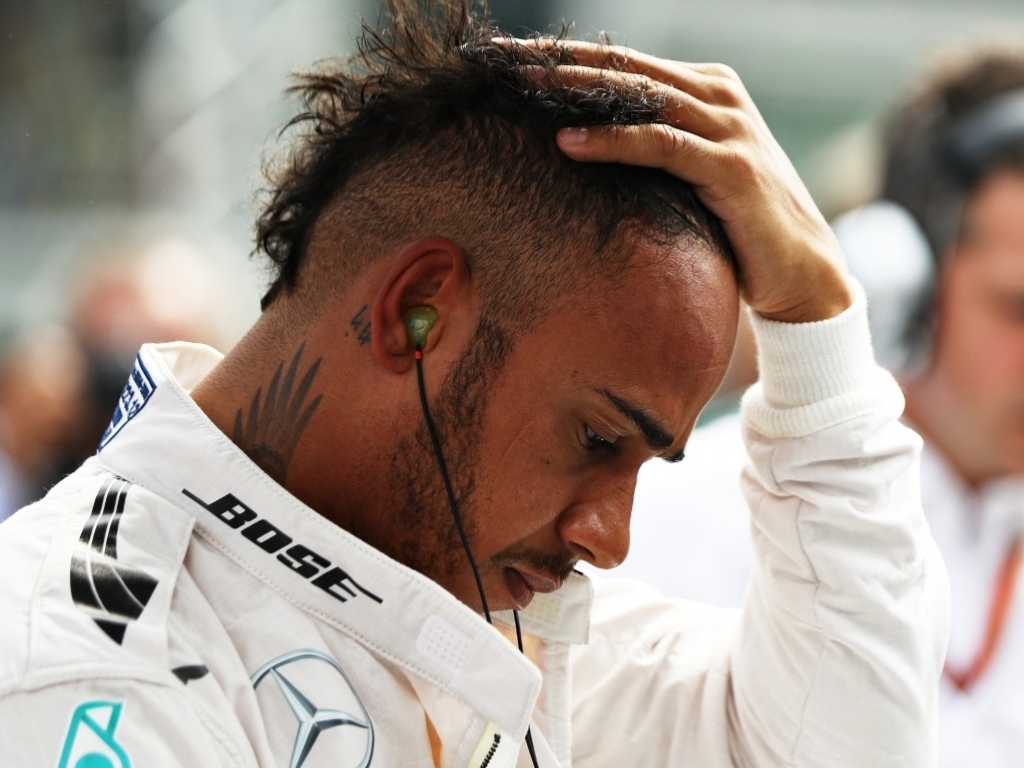 Did Lewis Hamilton undergo a hair implant surgery? Nico Rosberg controlled Hamilton’s car with a remote control? Alonso out of his mind for thinking he can challenge Ferrari? And finally readers’ give their insight on F1’s latest departures next season.

Lewis Hamilton’s worrying hair-do…
Martin Saunders
HAIRCUT HAMILTON.. he has such a complex about his hair, so why keep changing it, and showing no respect at the National Anthem, arriving with an umbrella, for f…. sake who does he think he is. AND YES HE IS VERY GOOD.

Luke Seddon
He’s definitely had hair implants at the front.

Nico Rosberg’s devious tactics…
Salvu Borg
Could it be that Rosberg was operating car number 44 clutch and gass pedal by remote control apart from those on his own car?
The accusations for Rosberg continue, this time it was centered around him wanting to be like his teammate

The accusations for Rosberg continue, this time it was centered around him wanting to be like his team-mate…
Earl Richardon
Ha ha ha… he even copies Lewis crowd surfing but as usual not very good at it…. He uses his mechanics instead..lol.
At the practice starts Rosberg was heard reporting back to the team about his dodgy starts, could this have been a code to mess Lewis start up? Funny he was the one with the bad practice starts and Lewis start was messed up my a software glitch again… either way why does it take a bad race for Lewis for Nico to win? Has he won a clean race against Lewis this year so far?

Alonso has lost his mind, according to PF1 readers’ that is…
Robert Marro
Cmon alonso …early last year you said this time this year you will be on podiums and winning races……stop talking garbage

Farewells, and theories, pour in for Felipe Massa and Jenson Button…
Massa
Anthony Iuculano
The true hero of 2008. Robbed by Renault and the FIA. He showed a lot of promise up until his accident. Could have won more races yet. A truly sad and even premature exit for a man who had a lot of character and probably still had more left in him. Thanks for the memories Felipe.

Terry Murry
Remember when he came in the sport as Schumacher’s prodigy! Time flies. Well deserved retirement, and thanks for making Brazil 2008 one of the best endings of all time in the sport, it was bloody epic.

Asim Ali
He announces his retirement and suddenly everyone starts to appreciate and miss him. Fiinally some good words of praise for the happy chap/champ.

Mark Leel
I think it ended for him when Hamilton snatched title from him right at the end of the 2008 season that was his last race win.

Button
Joe Grind
The sabbatical seems like a move to see what transpires when numberous driver contracts will be up in 2018.
I think Button would like the distinction to have the most races in history for an F1 Driver surpassing the current record held by Rubens Barrichelo. He will need 1 more full season of F1 to reach that feat. After that I think he will permanently retire. It is a long shot but odds are he will not be awarded no seat and stay on the sidelines.

Borger Borgersen
Ron Dennis is more clever than we thought. He just proved that 1 1 can sometimes be 3.

Dominic Feltoe
Very sad. But also very interesting. Suggests they aren’t confident that Alonso will extend his contract, doesn’t it?