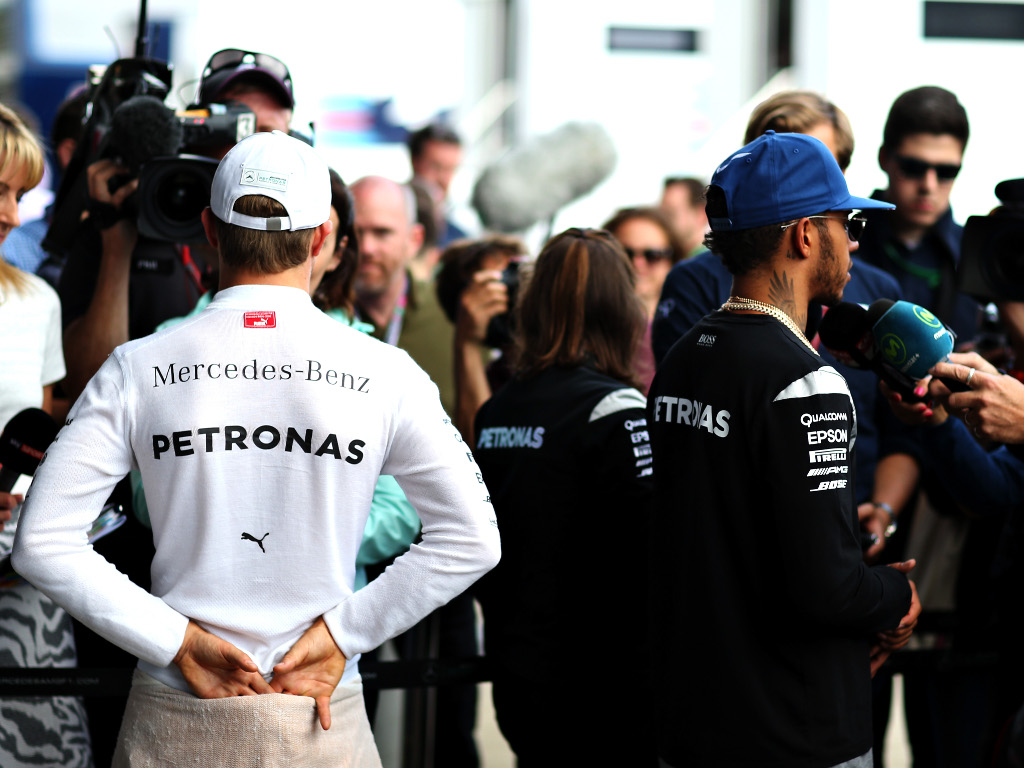 A water leak for Nico Rosberg, Lewis Hamilton’s deleted time, coupled with Sebastian Vettel’s gearbox issue and, of course, a Safety Car start and a Rosberg penalty brought out the tinfoil hats on PlanetF1…

It started on Friday…
Gregory Nicholls
Nice anticlimax merc ,Rosberg’s car was ‘ broken’ and he looked purdy please about it.Look for Hamilton to get the brunt of it all come qualit/raceday.With a purdy propa excuse from the team I might add.Nice one merc,lets see if it will stick.

Doug Sa
“Sadly it’s curtains for Nico Rsberg’s running today,” the Brackley team tweeted. “Driver out, bodywork off, investigation beginning…”………..Hahaha…Merc making a meal of this, so that they can argue its the same for both cars when Ham s engine “goes” during Q3 tomorrow….if u dont believe me , just wait and see.

Dayle Watson
Punishment for last week Nico or are the gremlins starting to finally even out.

Continued on Saturday…
Rossi Rosario
The fix is in and Lewis cannot afford to make any mistakes. No worries for that’s right up LH’S alley, for only Lewis is in supreme command of his car is and unmatched by anyone. rosberg cannot follow, the powers know this and are out to shave Hamilton down here and there, bit by bit in order to slow him down. Lewis is fighting more than other drivers, he’s fighting the institution, the old guard if you will, and he’s winning. My boy Lewis is the baddest on the planet and it will take a nation of millions to hold him back.

Mudassar Ahmed
Is it possible that Mercedes fully turned up Lewis’s car and Rosberg’s a little less? Poor ole Lewis still had to abuse track limits to get pole. The deletion of his first pole lap was an eye wash cuz he did the same with his final lap.

Ferrari got involved…
Isabella Dembs
Vettel’s 4th gearbox failure to Kimi’s 0. Yup, The team is out to sabotage Vettel for sure! Oh, I forgot, they don’t drive for Mercedes.

Even Mercedes were blamed for Ferrari’s troubles…
Lucky Luke
Merc is sabotaging him!!!

Folkert Eggenkamp
They cant, they havent got the man power to sabbotage both drivers.

Niki Lauda got it too…
Kenneth Gooswit
It is obvious that Lewis will not be champion this year. niki Lauda will take care of that.
I heard him talking to Nico, dont worry son, you will be the champ i promise you.
I have all the means under control, slow pitstops, wrong strategy, clutch problems and even bad publicity!

Peter Aldrich
Laura’s reaction to Lewis’s (second) pole lap today said it all. He’s clearly more than just rooting for Niko, he’s an adversary to Lewis. Not very nice for a three time world champ to have to deal with.

Kev Towle
Is it me or did Lauda seem to be annoyed that Hamilton got pole? Hamilton makes a mistake (and he does) Lauda is very critical, Rosberg makes a mistake and he refuses to comment until he has more details (such as the brakes were overheating?!?!?).

Mike Herbert
Lauda said to Lewis, come to Mercedes, we will give you a winning car maybe not in the first season but later on, i bet he thought Hamilton would not be a problem or a match for i cant overtakeberg, and they would have a German driver in a German team win the WDC by now, oh dear Niki, never mind.

But it hit high gear on Sunday…
Jeff Walker
Mercedes is clearly trying to sabotage Rosberg. With Hamilton’s in Austria, they were careful not to say anything that would result in a penalty. This time with Rosberg, they just flat out gave him assistance. Rosberg dropped another position, and not only that, Rosberg’s car is going to need another transmission in the next race as well. Mercedes is definitely helping out Hamilton here.

Web Hogg
merc made the call to let the ‘boys’ know that they are serious about team orders, not much differrence in points for constructors, so they use radio in hopes of penalty… back in garage they tell both, see how easy it is for management to punish you… nico got his for last week…

Richard Rayson
Definite favouritism and bias towards Rosberb in the Mecedes team. Rosberb has a problem at he GB Grand Prix and within a few seconds he has the information to put it right. Hamilton has an issue in Baku and he is told by the team they cannot give him the information and ends way down the field. Grossly unfair, Rosberb should be disqualified or at least a 25 s penalty, its a joke.

Earl Richardon
Point of note is Mercedes once again demonstrated their obvious bias, towards Nico. A few week ago they couldn’t/didn’t give Lewis any assistance with a very critical problem- but today? They invented silly excuses to coach Nico out of a situation..
Shows how nico lies about knowing what to do when problems arrise, he lucked in the last time and karma caught up with him here.

Kevin Farley
“I was worried, but Uncle Bernie has decided to start all remaining races behind the safety car, since I can’t use a clutch ‘n stuff.”, Hamilton gushed. “I’m so lucky England only has one sport they can manipulate! Well, unless you consider snooker a sport….certainly cricket isn’t.”

Mudassar Ahmed
Well done Charlie Whiting for helping Lewis win another GP. He hasn’t had a clean start this season and today the conditions were ever more scary. Charlie Whiting made sure first by starting behind safety car and then keeping safety car long enough that Lewis doesn’t lose any advantage. It was only when Lewis relayed the message through radio that “I am okay to go racing now, Charlie” did Charlie decide its time to call SC in. What a farce!
P.S. It shouldn’t be called Formula 1, it should be called Formula Lewis.