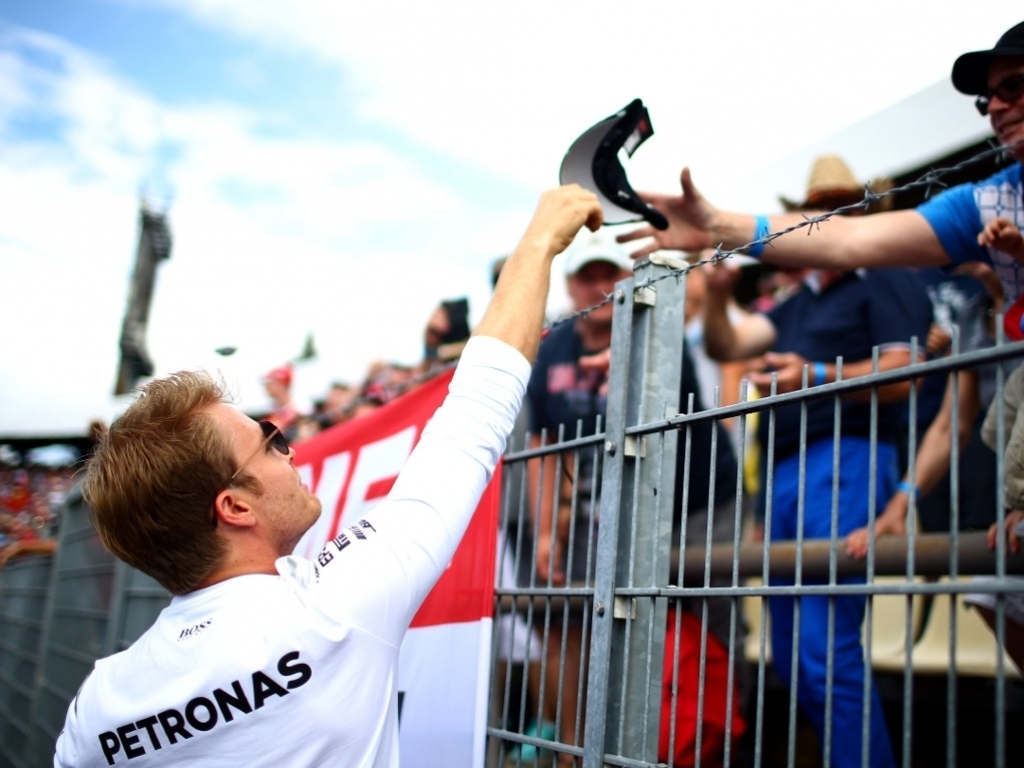 From the radio ban being lifted to help Nico Rosberg to Mercedes’ eight-count aimed at teaching him a lesson; the tinfoil hats were out in force for the German GP weekend.

Radio comms are back
Kgosi Maimane
So, decided to aid Nico again after all….

Bob Faestel
That is exactly what my first response was!!!!! LMAO!!!!

Rosberg wanted Halo
Pete Norriss
Rosberg desperately wants the halo so he can keep ramming Hamilton off the circuit without risk of hurting himself! Too late for him to think about safety when he goes purple through double waved yellows!!

Rosberg claimed pole (at home)…
Victor Sihambi
It had to be a German driver on Pole to boost attendance guys, just like it fits a British Driver at Silverstone!
The race will be too close to call, i suspect the hairpin at the backstraight on first lap will be the decider! Thats a long straight!

Martyn Sloan
we all know that merc called rosberg in, added a fast acting untraceable addative to the fuel so make him faster, the additive was derived from dragon’s blood which burns hotter creating a faster ICE which gives more power to the other elements of the engine.
the evidence is all there, wake up people, why can’t you see the truth.

Alexander Smith
CONSPIRACY!!! There was no “electronic trouble” Merc pulled him in so they could boost his flux capacitor in another one of there efforts to thwart their other winning car from winning!!! Open your eyes people!

John Bull
That’s probably the reason why LH was not punished for the unsafe release. The Stewards thought it would even things up.

Matt Gibson
Paddy Lowe wasn’t even watching Hamiltons lap. Maybe he wants Nico to win too just like Toto and Niki. Engine failure being planned for Lewis in the race I suspect

Mercedes were left to plot…
Jose Alvarez
ill stir the pot..Does anyone think Merc will use some type of team order to ensure Nico wins his home race since Lewis won his? Specifically making it more of a trifecta of a german driver winning in a german team on the german race…? Im not asking from a conspiracy aspect, just simply does anyone thin Merc would consider such a scneario?

Rosberg penalised for pushing Max off the track
Tony Hibbert
rosberg gets a pat on the wrist again ! he knows daddies friends will look after him . thruth is though rosberg IS abetter driver than this cheating little rat and he would gain more points if he just raced fairly, IF HE HADNT BEEN WASTING TIME CHEATING HE WOULD NOT HAV LOST A 43 POINT ADVANTAGE ! HE WOULD OF PROBABLY BEEN ABLE TO GET SECOND PLACE HERE AS WELL …. AS LONG AS NICO IS CONCENTRATING ON RUINING OTHEER PEOPLES RACES HE WILL NEVER BE WORLD CHAMPION

Paul Dickson
That was a BS penalty on Rosebud. It looked a bit like Austria, where he wasn’t penalized for a much more questionable maneuver. The FIA is an F’ing joke! F1 needs consistent scrutineering, with consistent stewards.

That eight-second five-second penalty
Tony Hibbert
rosberg should still have the advantage but he will throw it away as usual by cheating <badly> i suspect toto ordred a longer pit wait as a slap on robergs wrist .. haha even toto looked embarassed

Juan Gonzalez
The 5 second penalty was so lenient that his team decided to make it last 8 seconds. Rosberg showing once again why he is a good driver but not a great one.

Clearly the stewards are favouring Lewis
Sandip Singh
How much more cheating do the stewards need to do to hand lewis the title. Any idoit who thinks different about the 5 second penatly needs to hear what brundle and the rest had to say. Bunch of washed up drivers handed to steward races in favour for lewis and the title..