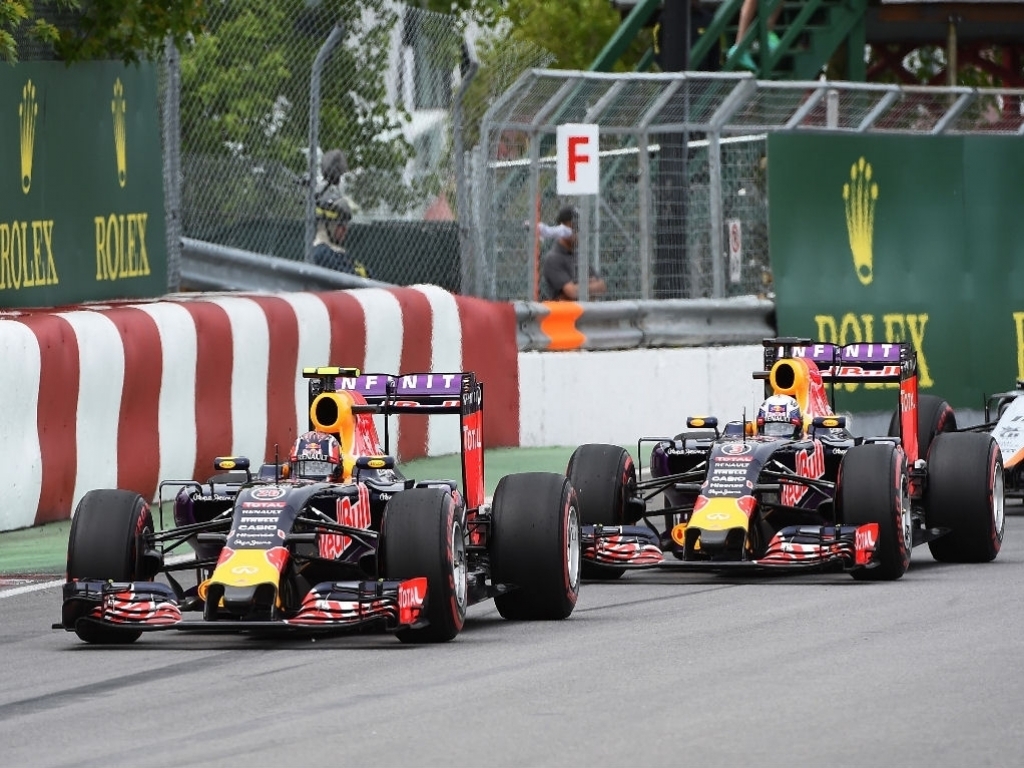 Red Bull introduced a raft of new parts in Montreal, partly in response to the shorter nose, introduced in Spain, but mainly as part of an aerodynamic revamp the team needed to marginalize their powerunit issues.

Blown Axle
The loss of 150mm in the front wings span for 2014 led teams to compartmentalize the outer section of the wing in order to deal with the wake produced by the front wheel. For 2015 several teams (Ferrari, Red Bull and McLaren) identified the blown axle as a way of reducing the wingspan required for turning the airflow outward. The blown axle (marked in purple), takes airflow gathered by the brake duct scoop, pushes it through the axle and ejects it into the airflow passing by the front wheel, changing the shape of the wake shed by the tyre.

Red Bull have already changed their endplates ethos this season, closing it off and placing a canard midway along its length, creating a pressure gradient. The vortex this canard sheds shapes the wake from the front wheel and has likely led to the team not using the blown axle in Montreal (marked in green). After all, circuit characteristics dictate that drag reduction trumps peak downforce, this along with other changes downstream of it were aimed at increasing the efficiency of the RB11.

Front Brake Duct
The front brake duct saw further revision in Canada, with the new scoop (marked in red), which cools the caliper, retained from Monaco. Like Mercedes before them, the brake ducts lower leading edge is now placed astray of the tyres edge (marked in yellow), which not only clears the airflows path toward the lower scoop, but creates another flow structure inboard of it to help manage the tyres wake.

The crossover pipe was also enlarged (marked in yellow), allowing more cooling across the front surface of the brake disc, before being ejected out of the wheel face, which in itself goes some way to marginalizing the loss of the blown axle.

Turning Vanes
The adoption of the shorter nose in Spain was always likely to be followed by updates that could take advantage of the change in airflow structures downstream. As such, the team introduced a new set of turning vanes in Montreal. Just like Red Bull's new nose, the new vanes are remarkably similar to that of their junior teams, with the number of slots increased from two to three, whilst their shape has changed radically too. The desired upshot should lead to better protection from the front tyres wake, improving the performance of the airflow passing by the splitter and around the sidepods undercut.

Sidepods
Much like the revised sidepod arrangement we saw Ferrari introduce in Spain, Red Bull have revised the geometry of their sidepods (marked in yellow) with the shoulder (red line) of the sidepod now taking a much steeper decline. This geometry change also led to changes to their engine cover, which is now much broader at its connection with the sidepod, whilst both changes have facilitated a change in the cooling outlet geometry.

The changes serve several purposes, including but not limited to: changing the sidepods internal airflow structure, changing the cars centre of pressure, tightening the rear undercut of the sidepod (exposing more of the floor) and repositioning of the airflow dispatched by the cooling outlets. These changes are not in search of peak downforce, as we have seen teams chase in the past, but rather a shift in ethos, as the team search for more efficiency.

Red Bull's domination of the sport between 2010 and 2013 was predicated by their ability to build cars that created significant peak downforce, which annexed to Vettel's driving style, enabled apex speeds far beyond their rivals. However, the aerodynamic performance envelope of the new hybrid powerunits requires a different outlook to the V8's, as it is more efficient to give up some apex speed and chase top speed.

Down on ultimate horsepower, Red Bull have found it difficult to balance this change in philosophy and are constantly making changes to fill the void. Over the coming GP's, inline with Renault spending the remainder of their 12 development tokens, I suspect we will see an uplift in performance, how large will depend heavily on what Renault spend their tokens on, how Red Bull continue to adapt to this new era and how the development of their rivals marries up.