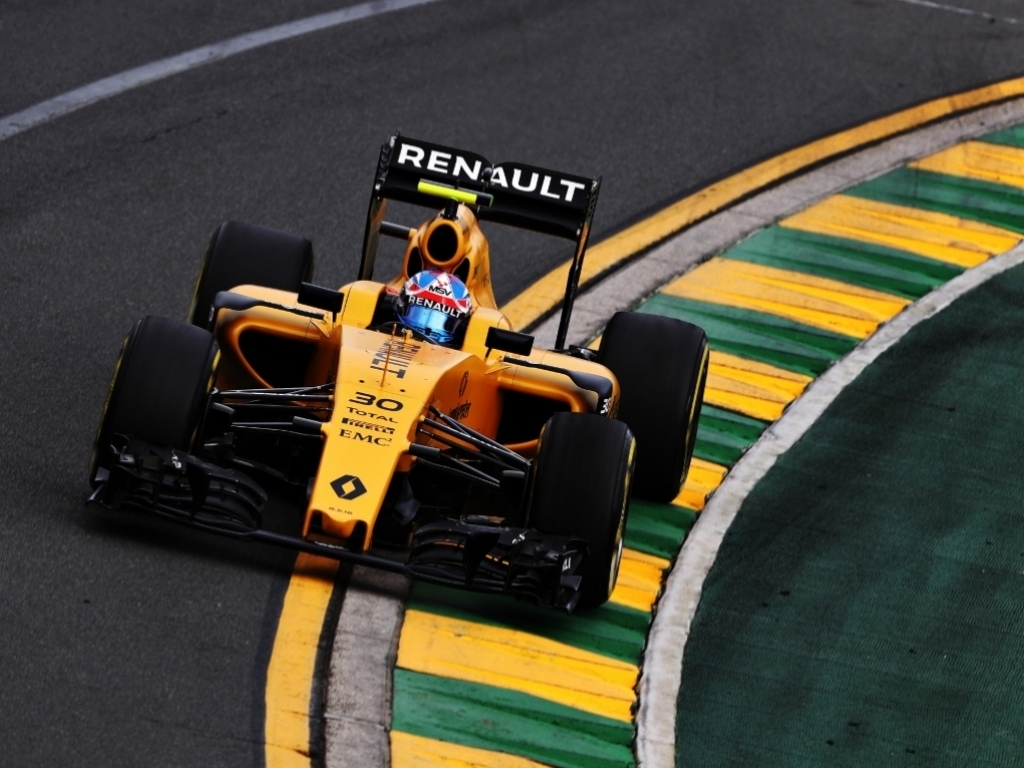 Having made a solid but point-less start to the season, Jolyon Palmer and Kevin Magnussen believe Renault can build that at the Bahrain GP…

Jolyon Palmer
Q: Jolyon, how would you review your first race weekend as a Formula 1 driver?
JP: I really enjoyed it. Everything went very smoothly. I had a good qualifying and then maximised the car in the race. I was happy with the race; I had a good start and was wheel to wheel for quite a long time, scrapping hard – it was great fun. I wanted to get to the finish, and you always dream of stealing a point, but I just missed it with P11, which is really frustrating! But we can definitely build on this. In Australia we didn’t have any more pace in the car, but it was an encouraging start.

Q: Did your dad give you any tips?
JP: Not really! The only thing he kept saying was to drink – he kept repeating that I needed to say hydrated, but that was his only expert guidance! He let me get on with it…

Q: How did you feel coming back to racing after a year out?
JP: It felt completely normal. The difference from GP2 to F1 is that there are bigger variables. People are on different tyres and strategies, so you have to work out whether you can realistically fight and keep position, but it was not a problem. I had some good battles and really enjoyed it.

Q: And how have you found the team?
JP: I feel at home in the team. The team is operationally very good and we have more developments coming. The car is nicely balanced, the pace is good – all in all, it was a strong start, especially considering the takeover was completed just before Christmas. We have upgrades coming all the time and it should not be too long before we can fight for points consistently.

Q: What can we expect from you in Bahrain?
JP: I raced there in GP2 and it’s a track I have been successful on in the past. I won the last race I did there, then I also had a podium. I also drove in practice last year. The track is OK. There are a lot of straights so plenty of overtaking opportunities, so we will find out more about the car in this trim. There is a lot of track evolution as it is very sandy at the start of weekend, and then the track gets more and more rubber down, so conditions change a lot.

The weather is almost always sunny, but it can be quite windy, which can blow sand onto the track. The fact it’s a night race is pretty interesting as it’s still very dry. In terms of set up, practice 1 and 3 are hard as they are a lot hotter than the race but there is a lot we can do in procedural terms, such as aero tests. I will be more relaxed now I have one race under my belt, particularly as I finished all 58 laps. I feel much more comfortable after pre-season testing and am looking forward to going to a track I know and have won at before.

Kevin Magnussen
Q: How was your first race with Renault Sport Formula One Team ?
KM: Having been out of F1 for a year, it was very nice to be back. It was a tough race, but I was really happy as the pace was very good. It was annoying to get that puncture at the start, which compromised our race. I didn’t have any contact as far as I could tell, but I saw the pressures coming down and knew that something was wrong. In some respects we were lucky to get the red flag, but it was even better that Fernando was unhurt as that was a big crash.

We could get back to the pits and on to the grid and then I had the race from there. We had a good pace – on par with Williams and maybe even faster. We didn’t think we would have the pace of the top ten, but in the end we did. I’m gutted as we could possibly have been in the points if I had not had that puncture, but that’s life. For a first race, it looks very encouraging for the rest of the season.

Q: What did you think of the R.S.16 ?
KM: The feeling in the car was good and I was able to fight and overtake and put the car where I wanted to. It’s clearly very driveable. It is not fast enough to be on the podium or even in Q3 but it’s a good car that handles well and it’s something we will continue to work on. We don’t need to change the philosophy in any way, just keep developing and it will come to us.

Q: What did you make of your new team in race trim ?
KM: It is very clear that this team is a top team in F1. Maybe not in terms of pace : we know where we are and we are not happy with this, but when we get the car faster we will be there. We have a good baseline and something we can really work on. I didn’t have a good race but I am very happy as it looks good for the rest of the season.

Q: The next race is Bahrain, is it a favourite race for you ?
KM: It’s not the most exciting track, to be honest ! The heat is a major challenge and it is tough on the rear tyres so having a car that looks after them will be an advantage. There are also four long straights so it is a power orientated track. I will enjoy getting out there and if you ask me if the race could be tomorrow I’d be there, no questions asked !