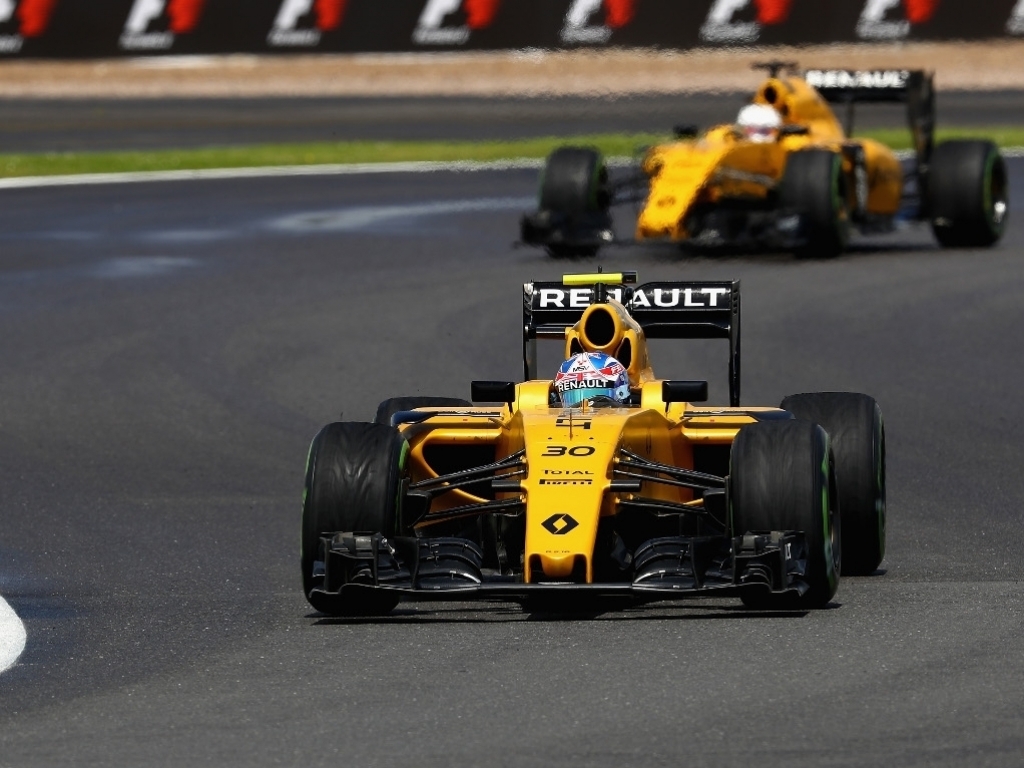 Kevin Magnussen
What do you think of Hockeinhem?
KM: It's a great track and the atmosphere there is always awesome. Turn one is very fast and it's a great way to start what is always an exciting first lap. It's difficult; you can gain or lose a lot of positions there depending on whether you have a good or bad exit. Do it well and you'll make up a lot of places down to the next corner. Mess it up and it will be the exact opposite. There's good overtaking opportunities down the long straight as well and a massive braking zone, perhaps the biggest one in Formula 1. It's similar to China in that way. Then the final sector where the circuit goes from being quite wide to being a really old school narrow track and there is a very banked corner, which always makes it quite cool to drive.

What about the old track, ever wish you could have had a go?
KM: I would have loved to have tried that. Anything that's extreme, I like. The long straight they used to have, the speeds you would be able to reach in our cars… It would be ridiculously fun.

The German Grand Prix is the last race before the shutdown, any plans?
KM: I will be enjoying taking the break day by day, at home in Denmark, and trying to relax with my girlfriend and my dog. The second half of the season is pretty intense with a lot of travel so it's good to recharge the batteries mentally and physically.

How would you review your season so far?
KM: It's been a tough season for the whole team but it's also the start of a big project and a very exciting time to be here. Everything is being rebuilt and growing; the foundation has been set for the future. So I would say I've had a very enjoyable year so far and I'm sure it will continue. Being part of the Renault factory team is fantastic. There are three factory teams in Formula 1 and to be part of one of them is huge. Yes, we are not delivering what we want on track at the moment but we knew that would be the story of this year. We are aiming to be performing in the future, obviously we do our best with what we have now, but I'm sure we'll see big things from us in the future.

How do you review your Budapest weekend?
KM: The positive thing from Hungary is that we were able to fight higher up the field. We were in there with both Haas and one of the Williams, the car felt better all weekend, and hopefully we will be able to carry this into the season. The work we did at the Silverstone test days clearly improved the car and I think this is something that will help us more at slow-speed tracks rather than high-speed circuits, but it's certainly encouraging.

Jolyon Palmer
Firstly, so near yet so far; what happened in Hungary?
JP: It's painful to look back on. I was well-placed in P10, I had the pace on those around me and I was driving really within myself. I wasn't exactly hanging anything out and hadn't had any big moments, everything was under control but then I lost the car in Turn 4. It's difficult for me to understand why. I hadn't experienced oversteer the whole race in that corner and then I turned in and lost the car completely. I had a massive snap and then I was pointing backwards.

Aside from that one moment, how was the rest of the Budapest weekend?
JP: The weekend was perfect apart from that one corner. It was easily my best race ever. The strategy was really good. The pit stops fantastic. Everything came together. The good news is that we didn't luck into our performance, which shows we have the pace and can do it again. We've made a big breakthrough so I think it will carry on for another couple of races. My first F1 points were there for the taking in Hungary and I didn't take them. I'm very eager to redress that situation in Germany.

What are your thoughts on Hockenheim?
JP: It's a circuit I haven't raced at so much, as I've raced there only for two weekends previously. The two big features that stand out are the very long straight and the stadium section. Despite the changes to it over the years, it still has a really old-school feel to it, especially the arena section, which is very narrow and how close the fans can be there as well. It has a really nice flow, especially the second half of the lap, and a lot of slow and medium speed corners, which I quite like.

Do you enjoy racing in Germany?
JP: There are a lot of passionate fans who come from all over the country and they really know how to enjoy the weekend. The campsites can be quite something to behold. It's the last race before the August break so I may well treat myself to a nice German beer on the Sunday night.