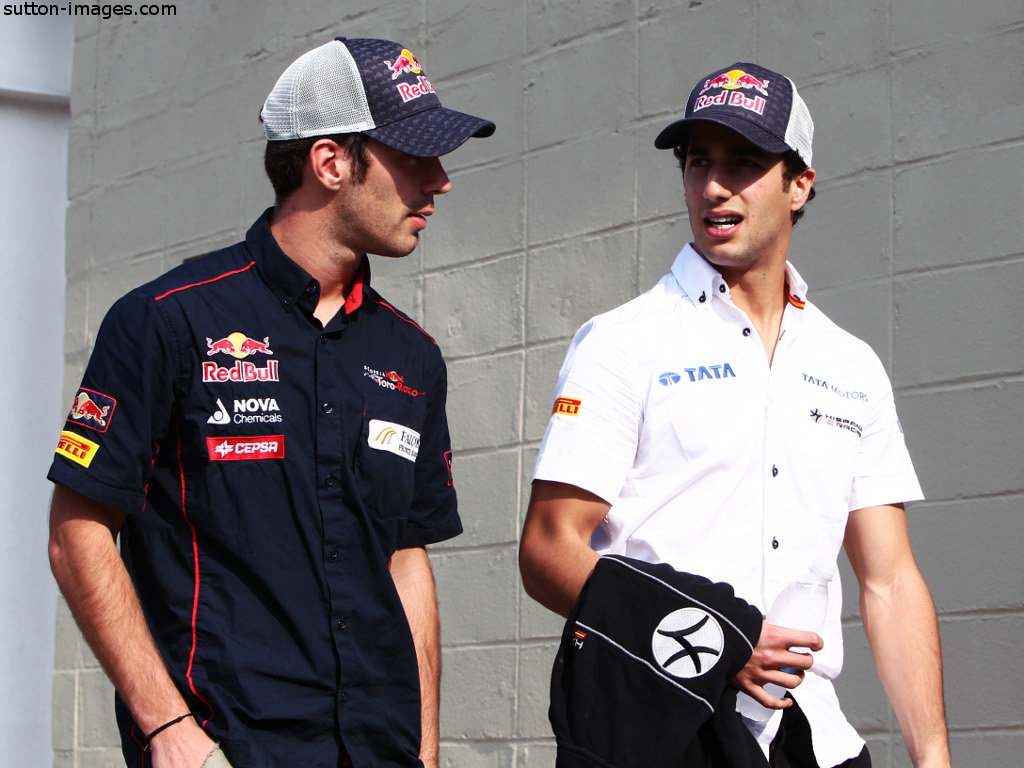 Sebastien Buemi and Jaime Alguersuari have been given the boot by Toro Rosso and they will be replaced by Red Bull Junior drivers Daniel Ricciardo and Jean-Eric Vergne next season.

It will be the first time since the 2006 campaign that the Faenza-based squad will start a season with two new drivers.

STR finished eighth in the Constructors’ Championship with Alguersuari picking up 26 points compared to his team-mate’s 15. It wasn’t enough though for the duo to hang onto their seats.

Team boss Franz Tost said it is important to get drivers from Red Bull Junior programme on the grid.

“I am pleased that we have been able to reach an early decision on our drivers for next year, because it means we can all give our full attention to 2012, without any distractions,” Tost said.

“Over the past year, both Daniel and Jean-Eric have proved their worth and I expect them to make a significant contribution to the team’s performance next year. Daniel has the benefit of having actually raced in Grands Prix for much of this year, while Jean-Eric proved he could adapt quickly to the demands of driving a Formula 1 car.

“As they have both worked with the team and its engineers very recently, this should allow us to get up to speed right from the start of winter testing in a couple of months time.

“I must also thank Sebastien Buemi and Jaime Alguersuari for all their hard work over the past three seasons. They have delivered some excellent performances which have helped the team move forward and develop. We wish them well for the future. However, one has to remember that when Scuderia Toro Rosso was established in 2005, it was done so with the intention of providing a first step into Formula 1 for the youngsters in the Red Bull Junior Driver programme. It is therefore part of the team’s culture to change its driver line-up from time to time in order to achieve this goal.”

Australian Ricciardo lands his seat on the back of his stint with HRT this campaign.

“This is a really big deal for me and something I have wanted ever since I was driving for Toro Rosso on Friday mornings at the races in the first part of last season,” the 22-year-old said.

“To be honest, I am still jumping up and down with excitement at the news. In the second half of 2011 I learned a lot from the people I worked with, racing in eleven Grands Prix and I want to thank them for the opportunity they gave me.”

Frenchman Vergne took part in practice sessions for Toro Rosso in three races at the backend of this season and also drove in the Young Driver Test for Red Bull.

“First of all, I must thank Red Bull for all their support so far and for believing I am ready to take on the ultimate challenge of racing in Formula 1,” Vergne said.

“Christmas has come early for me this year! Having driven for them a few times this year and also testing for Red Bull Racing in Abu Dhabi, I definitely feel ready to make the move, even if I know there is a big difference between testing and actually racing.

“I enjoyed working with the guys at Toro Rosso this year and I can’t wait to be part of the team for real. Sitting on the grid in Melbourne next March cannot come soon enough.”