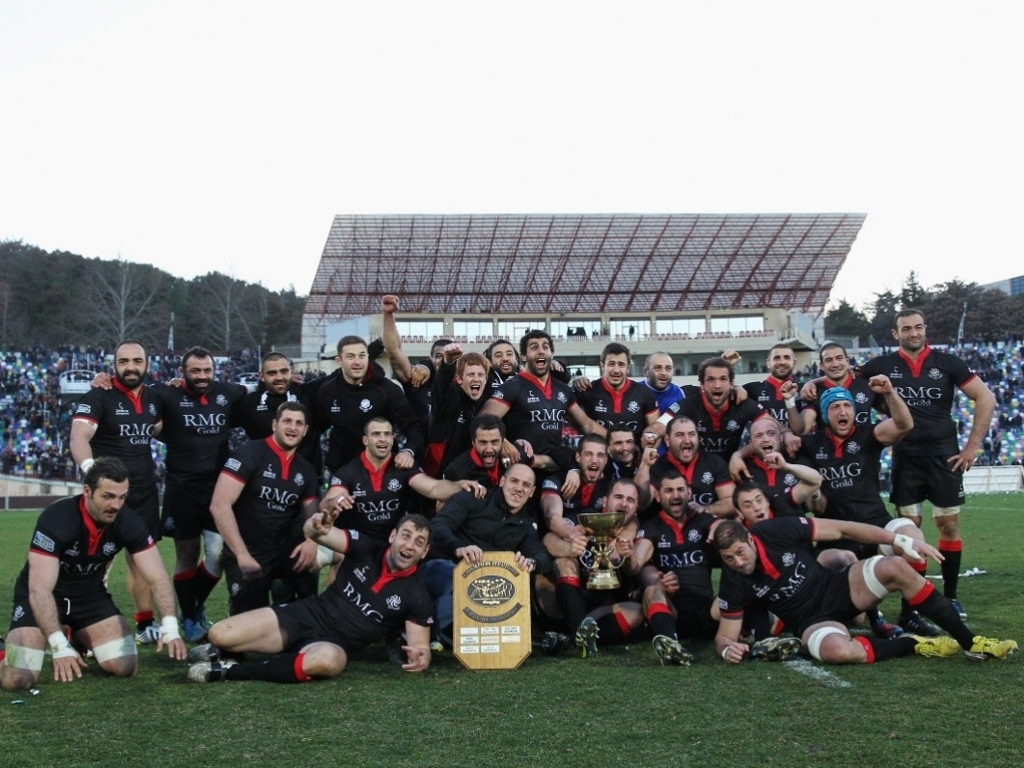 World Cup track record:
Georgia first appeared in a Rugby World Cup back in 2003, missing out on the first four tournaments between 1987 and 1999, before making their bow in the tournament in Australia. Their first win came in the 2007 tournament over Namibia, a comprehensive 30-0 victory while they came close to shocking Ireland in the same tournament. They followed that up with a 25-9 win over old rivals Romania in 2011.

2011 World Cup: Georgia's qualification for the 2011 tournament placed them in Pool B alongside England, Argentina, Scotland and Romania. Throughout the competition the Lelos proved to be a difficult side to put away, going down to Scotland 15-6 in the opening clash before being well-beaten by England 41-10 in their second game. A sweet win over Romania followed, largely thanks to the boot of fly-half Merab Kvirikashvili who kicked five penalties, before Argentina came out on top in the final game of the group by winning 25-7. As a result of their win over Romania, Georgia finished fourth in Pool B.

Form: Georgia continued their dominance of tier two sides in Europe in 2015 with wins over Portugal, Spain, Russia and Romania. They were however beaten by Emerging Italy and Emerging Ireland in the Tbilisi Cup while last November they lost heavily to Ireland in Dublin and to Tonga, beating Japan in their final game of the year.

Coach: Milton Haig is one of a number of coaches from New Zealand taking charge at this year's Rugby World Cup. A scrum-half in his playing days with Southland and Bay of Plenty, Haig began his coaching career as an assistant in New Zealand with the Steamers before taking charge of Wanganui and working with the New Zealand U21s. From there Haig spent time working with the Maori All Blacks as an assistant coach before taking charge of Counties Manukau. In 2011, Haig was part of the coaching set-up with the Chiefs in Super Rugby before he was recommended to the Georgian Rugby Union as a potential candidate by current Scotland boss Vern Cotter. Haig took charge of his first match with the Lelos in 2012. Under his guidance Georgia qualified for the 2015 Rugby World Cup after finishing top of the European Nations Cup First Division, going unbeaten in 2014. In his time in charge Georgia have defeated Samoa and Canada and the team faced Ireland in Dublin in November 2014.

Captain: Following the the retirement of long-time winger of Irakli Machkhaneli the door has been left open for a new captain. Shalva Sutiashvili led the country during seven Tests during the 2014/2015 season and the experienced flanker will win his 50th cap for his country at this year's Rugby World Cup. He is part of a competitive back-row for the Lelos alongside Mamuka Gorgodze, who has been named the squad's skipper for the global tournament. The giant Toulon forward joined the three-time European champions from Montpellier in 2014. Gorgodze is respected around the world for his size and strength, regularly producing monstrous carries with the ball in hand.

Key players: Georgia boast a number of impressive forwards playing their rugby for top teams in France, and all will have a major role to play during the World Cup. None come bigger in that respect than Mamuka Gorgodze, who will no doubt look to lead from the front but he will be well supported by Toulon team-mates Konstantin Mikautadze and Levan Chilachava. Georgia also boast two of the best props in European rugby with Davit Kubriashvili and Davit Zirakashvili, who play for Stade Français and Clermont, while Viktor Kolelishvili is a rising star in the back-row. In the backs Georgia will look to the experience of their record points scorer Merab Kvirikashvili, who is set to play in his fourth World Cup.

Profile: Georgia are all about power, with so many quality forwards at their disposal. It's natural therefore to expect them to test even the best sides at the Rugby World Cup with the force they are able to generate through their scrum. When combined with the boot of Kvirikashvili, they become an even greater threat.

Calls have been made in recent years to allow Georgia the chance to compete in the Six Nations, which is a measure of highly the Lelos are regarded in world rugby. Whether that happens in the near future or not remains to be seen but the support of Georgia's fans and a growing passion for the game in the country, not to mention large crowds at matches in Tbilisi, all show how passionate Georgia is about rugby as a whole.

Having the bulk of their squad playing in the Top 14 in France has certainly helped the development of the national side. An obvious issue however is that while Georgia are blessed with a number of options in the forwards, the backs are not quite on the same level. That and a lack of exposure to playing the top sides makes it difficult to predict how Georgia will fare against more established opposition. What isn't in doubt that Georgia will playing with plenty of pride and enjoy the arm wrestles up front. In the shape of Gorgodze, they have a talisman to lead the way.

Prospects in 2015: Georgia will be looking for their best ever finish at a World Cup if they can pick up victories over Tonga and Namibia in Pool C, but they might not have enough in the tank to really push New Zealand and Argentina.