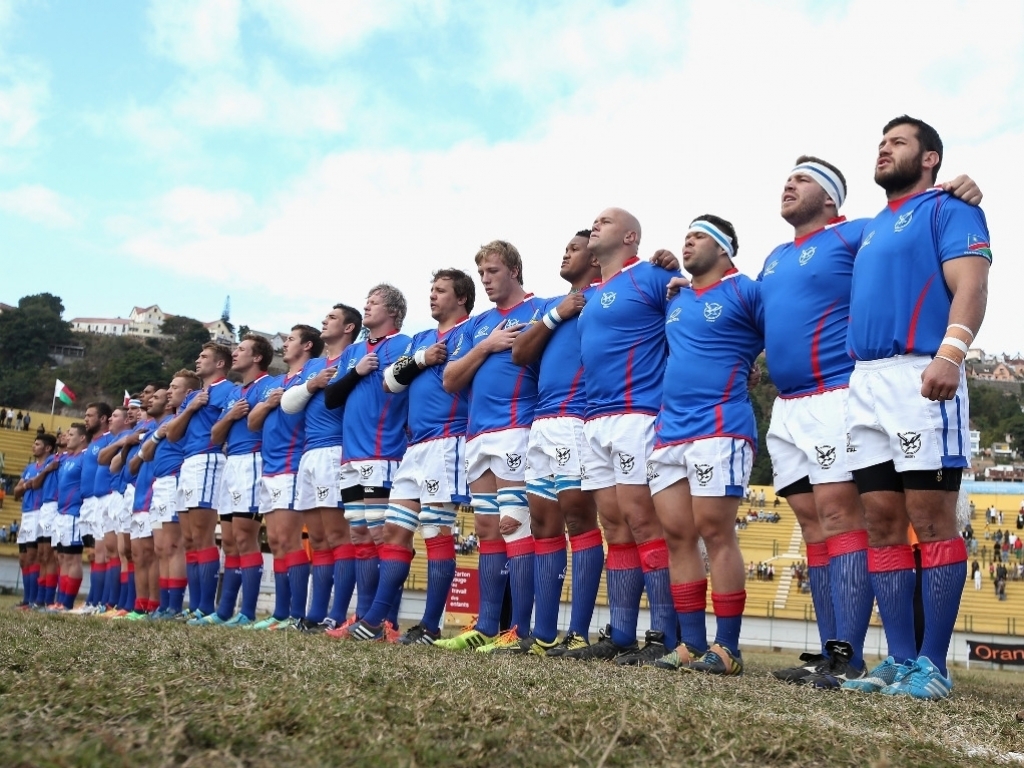 World Cup track record:
Namibia first qualified for the Rugby World Cup back in 1999, the fourth edition of the tournament, and have been at every Rugby World Cup since then including 2015. However they are yet to win any of their matches, suffering 15 losses from 15 games so far.

2011 World Cup:
Namibia were grouped with holders South Africa and Wales along with Pacific Island nations Samoa and Fiji in a tough Pool D at the 2011 World Cup in New Zealand. Securing any victories always looked like a difficult ask for the Namibians and they started out with a 49-25 loss to Fiji, before conceding the same number of points in a 49-12 defeat against Samoa. Namibia failed to score a single point in an 87-0 loss to South Africa in their third group game, before going down 81-7 to Wales to finish off a bruising time in Pool D.

Form: 2015 opened with a 43-3 loss to Romania in June before they went down to Spain 20-3. A change of coach seemed to help Namibia as they've since beaten Russia twice, Kenya and most recently Zimbabwe, all in Windhoek to give them with much-needed condifence ahead of the tournament.

Coach: Phil Davies is a coach from Wales who won 46 caps for his country as a lock forward between 1985 and 1995. Following his playing career Davies took up the director of rugby role with English side Leeds Tykes, now known as Yorkshire Carnegie, and spent a decade with the club from 1996 to 2006, winning promotion to the Premiership and lifting the Anglo-Welsh Cup at Twickenham. He returned to Wales to work with the Scarlets in the PRO12 but left after two seasons, before joining Premiership side Worcester Warriors as forwards coach for two seasons. Davies was lured back to Wales to work with another region in Cardiff Blues, but he resigned in March 2014 following a poor run of results.

He became involved with the Namibian national side for the first time that year, firstly as a technical advisor, before taking over as head coach from Danie Vermeulen in 2015 just three months before the start of the Rugby World Cup. Namibia is Davies' first role in international rugby and he will be coaching at the World Cup for the first time, having played for Wales in the 1987 and 1991 tournaments.

Captain: Admired by players and supporters for his all-action style and monstrous tackles in defence, Jacques Burger is Namibia's most famous player currently in world rugby. Born in Windhoek, Burger's playing career at club level took from Aurillac in France to two years with the Bulls in South Africa, playing in the Currie Cup and briefly in Super Rugby, before he moved to England in 2010. There with Saracens his career took off, with Burger featuring regularly for the side during a time of real growth both on and off the field that included added investment, a new stadium and two Premiership titles in 2011 and 2015, plus a European final in 2014.

Burger has since made over 100 appearances for Saracens and developed a cult following in England for his distinctive curly hairstyle, crooked nose and huge tackles, not to mention a disregard for his well-being on the rugby field. With Namibia, Burger made his debut in 2004 against Zambia and went on to play for his country both at the 2007 and 2011 Rugby World Cups, particularly impressing at the latter held in New Zealand. Set to continue playing until his body gives up on him, Burger is likely to be one of the stars of the Rugby World Cup in 2015.

Key players: The handful of Namibian players that play their rugby outside of their home country will be relied upon for big-match experience at this year's World Cup, led by Burger but ably assisted by a number of others. Perhaps the best attacking threat Namibia possess is Chrysander Botha who plies his trade with Exeter Chiefs in England. The flying full-back can also feature on the wing and Namibia will look to use his explosive speed whenever possible. Theuns Kotzé is Namibia’s premier fly-half and also their record points scorer at Rugby World Cups with a haul of 24 from 2011. His goal-kicking will need to be on the mark in order for Namibia to remain competitive. Elsewhere the likes of Tinus du Plessis, who was formerly with Wasps, Renaldo Bothma of the Sharks and record cap holder Jonny Redelinghuys will all have major roles to play, while Cheetahs hooker Torsten van Jaarsveld turned in a number of impressive outings during the 2015 Super Rugby competition.

Profile: Rugby has been played in Namibia for nearly a century ever since it was introduced by South African soldiers in 1916, but the Namibian Rugby Union has only been in existence since 1990 and as such the development of Namibian rugby remains ongoing. The side is arguably stronger than ever with the amount of players plying their trade overseas, but the reality is that more players like Jacques Burger are required in order to make Namibia a real contender.

Developing talent in the country is crucial long-term, with South Africa's record points holder Percy Montgomery in fact coming from Namibia, and the hope is that with increased investment and support from World Rugby that Namibia can progress swiftly. Namibia will certainly take heart from the fact that they have defeated both Romania and Pool C opponents Georgia in the past, while matches against New Zealand and Argentina can be a learning curve for the future. The objective for the very new coaching team of Phil Davies and Pieter Rossouw will be for Namibia to come away from the World Cup with a sense of progression in their performances compared to 2011.

They will look to use the power of their pack and players such as Van Jaarsfeld, Bothma and Burger to wear defences down before putting the ball in the hands of Kotzé to create chances and their best bet might be to engage sides who like to put the ball wide into more of a battle up front. Whether that will lead to a first ever win at the Rugby World Cup is another matter.

Prospects in 2015: Namibia started 2015 brightly with a two-Test series win over Russia (winning the second Test 45-5) which will give them plenty of confidence going into the tournament, but bedding in a new coaching staff and transferring their ideas may be a challenge too far. Their passion however will not be in short supply.