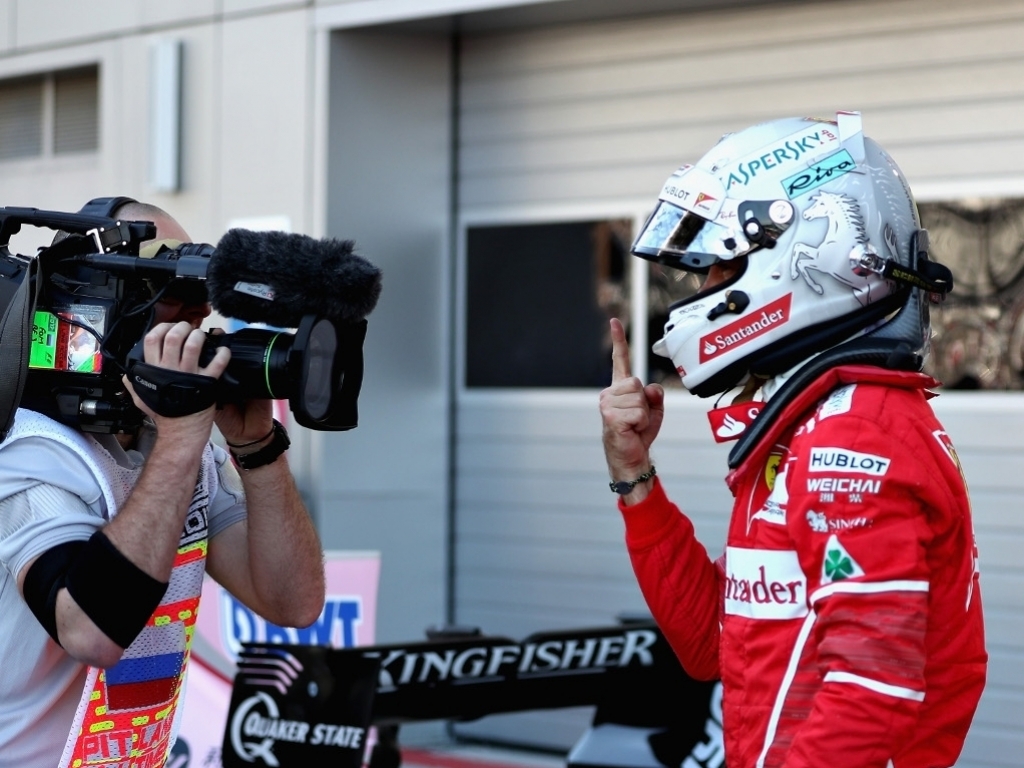 Ferrari locked out the front row for the first time since 2008, Lewis Hamilton was off the pace in P4 and Red Bull face a midfield battle.

Sebastian Vettel: “I think it’s just great. We had had a very good run also yesterday and this morning, and the car was phenomenal. So there’s no real secret to today’s result, it’s just the fact that if you get along with the car you find the rhythm and know what to expect. We knew it would be very tight against the Mercedes, it could have gone the other way, but I am very happy that we locked out the front row for the team. I had a good start to Qualifying , then in Q2 I lost a bit the rhythm. My first run in Q3 was not very tidy, so I left it to the last run. For us it’s so important as Mercedes had done an impeccable job in the last few years, so it’s great for the team and for me that we managed to break that. But now we’ll see what tomorrow brings. It’s a long race and we’ll try to confirm this result.”

Kimi Raikkonen: “Generally, it has been a very straightforward weekend: we have been happier with the car, set-up wise, since the beginning and when you start well it’s easier to work and improve here and there. This first row is great for the team, obviously I would rather be in front, but this is not an easy track to get a good lap. I’m happy to take second place , it’s a lot better that it has been so far this year. It’s good but it’s only qualifying, tomorrow is the day where we get points, and we have to do a good job out of it. I expect us to be ok, for sure it’s going to be a close fight. Hopefully we can make a good start and see what happens.”

Valtteri Bottas: “I think we can see Ferrari were quicker today. We were close in the end, but not close enough. All weekend they’ve had the upper hand and they’ve managed to extract more out of the tyres. They are looking very strong here and, as we’ve seen so far this year, Ferrari have a good race pace and we expect it to be the same tomorrow. We made an improvement from yesterday: it wasn’t quite enough but I think the changes we made overnight should help us in the race. Tomorrow is where it counts and starting on the second row is still not a bad place to begin the race. There’s a very long run down into Turn 2 and a lot of slipstreaming. Ferrari is ahead today, but hopefully not tomorrow.”

Lewis Hamilton: “I just wasn’t quick enough today. It was all in the last sector, I was losing half a second there. I’ve been struggling there all weekend with the balance and it’s been tough to utilise the tyres. We’ll go back to the drawing board tonight and try and improve. Ferrari did a great job. They look quick on race pace and my race runs weren’t great yesterday, so it’s going to be tough. But we’ll give everything we’ve got. Sochi isn’t the easiest track to follow on, but there are long straights which should offer the opportunity to move forward. That’s our goal. I’m on the dirty side of the grid so I haven’t done myself any favours off the start. But that was the best job I could do today. We’ve got a real race to look forward to. There’s no point being upset; we’ll channel our positive energy and hopefully Sunday will be better.”

Daniel Ricciardo: “I don’t think the practice session timings were completely representative of our pace and I felt like we were always a bit better than the timing screen showed but we hadn’t quite put it all together. In Q1 and Q2 we were trying to circulate and build temperature in the tyres but in Q3 we went for it and decided just to do one push lap which seemed to work so I’m glad we chose to do that. I’m pretty happy, I think fifth was all we could ask for today and that’s obvious looking at the gap to the front. Fifth is our best qualifying result here in Russia and we have to take the positives for now so I’m pleased to have achieved that for the team. I think Ferrari and Mercedes will be battling for the win tomorrow but we will definitely have a good fight for the top five. Compared to the Williams I think we have more rear downforce and could be better on the tyres but they have the straight-line speed and if you compare us to Ferrari and Mercedes they still have a bit of everything on us. For everyone watching at home I hope we can all have a good race and it’s definitely good for the sport now that Mercedes is being challenged.”

Max Verstappen: “A frustrating day all things considered, we knew this would be one of our toughest tracks of the season but I had hoped qualifying would go better than that. Q1 was not too bad for us but in Q2 I had a really bad feeling with the rear tyres and I suddenly lost grip, especially going into the last sector. Sector 1 and 2 went well on most of my laps but the time just fell away in sector 3 as I just didn’t have the heat in the tyres. P5 was our target and that looked possible based on my first sector splits but the time I lost in the final sector cost me that goal. In Bahrain our car had a good setup and worked with the tyres but here the long straights make it very hard to go quick and compete at the front. Tomorrow should be a one stop race and we will of course try to push and go forward but I just think the top four are too quick here. The target will remain P5 in the race tomorrow which would be a good result for us here.”