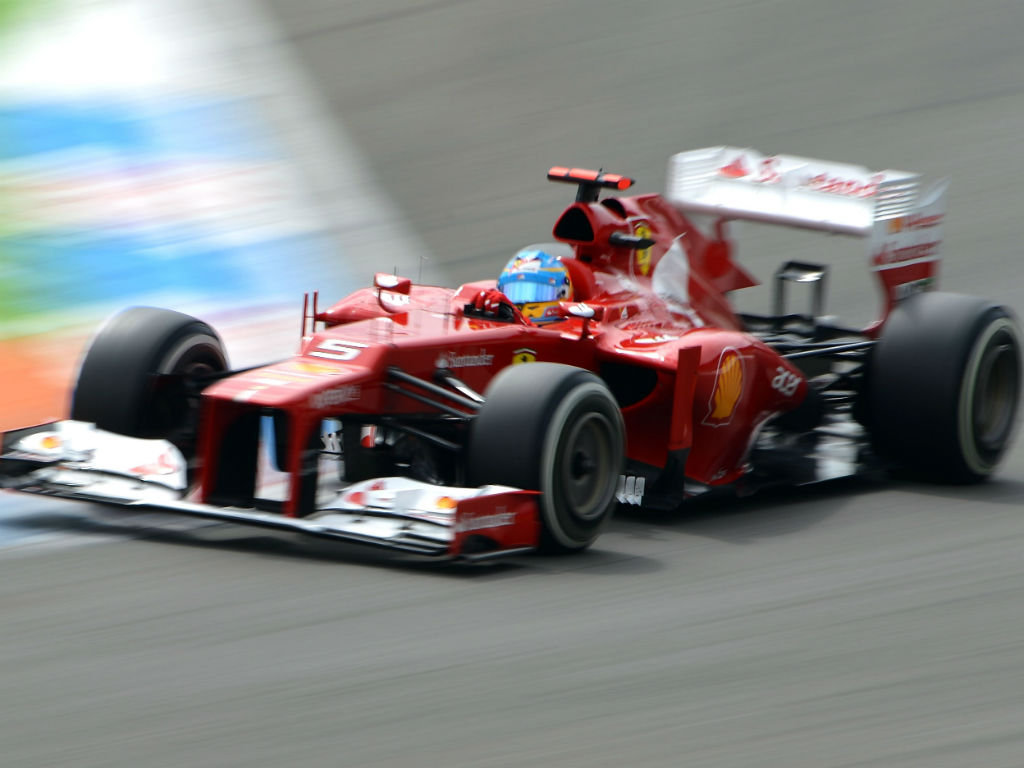 Fernando Alonso claimed his second pole position of the season in Germany, beating the two Red Bulls and Michael Schumacher…

Fernando Alonso claimed his second pole position of the season in Germany, beating the two Red Bulls and Michael Schumacher…

Ferrari:
Fernando Alonso: “I am very happy! When qualifying is run in these conditions, it’s very difficult to put together a clean lap and it’s very easy to end up in the grass, the gravel or in the wall! It’s something of a fight for survival: before anything else, you have to get to the end and then look at where you’ve finished. Then, when you hear on the radio that you’ve got pole, it is extremely satisfying, because there’s a feeling you really have given your all. The car was going well in all conditions, which is encouraging, as it means that we can be in the fight whatever happens, be it dry or wet. In Q2, we went out immediately, hoping to do a time on the first lap, because we knew the rain would intensify. At the end, we fitted the Extremes, because we at least wanted to have a rough idea of what the conditions would probably be like in Q3. The last part of qualifying was very problematic because there was aquaplaning, to such an extent that we did not use the KERS and you couldn’t use seventh gear on the straight. Managing to take pole in such extreme conditions is really gratifying! Tomorrow I expect that the strategies will be not be too different among the top teams, but with a good degree of flexibility. Looking at the championship, clearly I can’t be unhappy about the fact that two strong competitors like Hamilton and Webber start on the fourth row, but we know how quickly things can change. The start will be important, but not decisive, as we have 67 laps to get through… A Spaniard on pole in Germany in an Italian car? I don’t mean to be political, but it’s definitely a curious set of circumstances!”

Felipe Massa: “I am very disappointed with the way qualifying went. I did not manage to do a time at the start of Q2 because I went wide at Turn 8 and so was unable to put together a good lap in the only window available to do so. At that point on the track, the tarmac is different and it is very easy to lock the wheels and thus lose a lot of time. Then, it was raining so hard that there was aquaplaning: I had to try and stay on track while also trying to improve my time, but the conditions meant this was absolutely not possible, even when I tried with the Extremes. It’s a real shame, because the car was and is competitive, both in the wet and in the dry, but tomorrow I will start too far back to fight for the top places. I will do my very best, as always. It will be important to choose the right tyres at the right moment: we have some idea, but it’s a fact we were unable to do many long runs over these two days.”

Red Bull:
Sebastian Vettel: “The track was best at the end of the session, which is when we got our best times. In these conditions it’s extremely difficult, as you can lose the car through the rivers on the track. I lost some time running into Mark at the end of one lap, but it’s very difficult in these conditions and you can’t see anything in the mirrors. I think we had the pace today to put the car on pole – so we need to look at what Fernando did with his strategy. But it can be a lottery when the weather’s like that and fortunately we didn’t lose the car, which is good and I’m starting on the front line tomorrow. We are being consistent at the moment, which is the key.”

Mark Webber: “It was tricky for us and we had dodgy conditions on track. When you know you’re getting a five place penalty, it’s easy not to get it right but I’m very happy to finish today quite far way up. We did some good laps and got a good result. Fernando stopped for fresh tyres, which maybe we could have done, but should-have, could-have would-have, we got third and that’s good – even with the penalty. I’m looking forward to the race and to moving up the grid. We can do a lot from eighth. We’ve shown the car is strong in all conditions and we will be looking to come through the field.”

Mercedes:
Michael Schumacher: “That’s certainly a nice way to start the German Grand Prix – we had been expecting a position between fifth and seventh on the grid, so fourth in qualifying, which will become third place on the grid, is even better. Naturally I’m particularly happy for all the Mercedes colleagues in the grandstands: they support us throughout the year and we wanted to give something back to them. In any case, we can be satisfied with this result. Perhaps it would have been even better to change to a new set of tyres right at the end, but I don’t think we could have done much more today. Now we have to focus completely on tomorrow’s race. We know that it should be dry tomorrow and we should be more competitive here than we were in Silverstone.”

Nico Rosberg: “It’s a bit surprising to finish so far down in qualifying today, but unfortunately I couldn’t get the right temperatures in my first set of intermediate tyres in Q2 so I was a few seconds off the pace. Yesterday I was quite confident in the wet and in the dry so it is frustrating, especially on top of the gearbox penalty. But I will still hope to score some points tomorrow because a lot is possible in the races this year. I will definitely push a lot in front of all our fans here.”

Force India:
Nico Hulkenberg: “I feel very excited because it’s always special to qualify well, especially at your home race. It was a session that had a bit of everything because we ran on slicks, intermediates and wets. I think the most tricky conditions came during Q3 when I even aquaplaned off the track during my out lap and went into the gravel. Fortunately I was lucky and able to continue, but there was very little grip on the track. When you start high up you naturally want to finish high up as well and I hope we can have strong race. It will probably be dry tomorrow and there are a lot of quick cars behind us so we will need to think carefully to make the strategy work.”

Paul di Resta: “It was a very difficult session and the rain didn’t make life easy for anybody because there was so much aquaplaning on the back straight with two or three big puddles. Towards the end of Q3 I was getting ready for my final run but the traffic didn’t really work out for me and I struggled to get the lap when it really counted. Still, we made it into the top ten so I’m happy, but you always want to be a bit further up the grid. We think it will be dry tomorrow so it was important to get lots of running during final practice this morning to build up a feel for the car in the dry. We are definitely in a good position to score points tomorrow and I’m ready to fight and move forward in the race.”