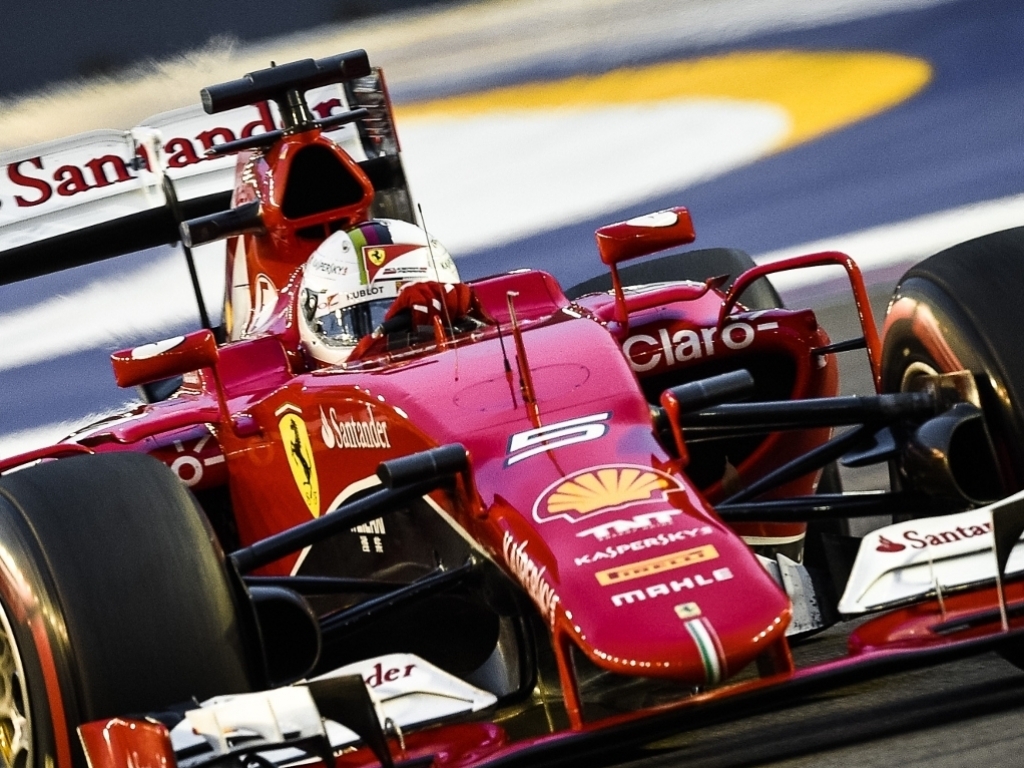 Mercedes’ record run of pole positions is over as Sebastian Vettel claimed P1 at the Singapore GP ahead of Daniil Kvyat in the Red Bull.

Ferrari
Sebastian Vettel: “Of course there are no points given today, but for the team, for all of us, this is a fantastic result! We had been waiting for so long for this pole to arrive, not just the team, but myself too. Perhaps I could have aborted the last attempt, but there was no much point in doing so, because I did not know what the others were doing and I felt fantastic, so I pushed to the end. Now I’m looking forward to the race tomorrow, knowing that it will be very difficult and challenging to master all the conditions that you experience in a race. But we are starting from the perfect spot. I wouldn’t mind to pull away at the start, but it’s going to be a very long race. There are so many small decisions you have to take, and it’s easy to focus on the big result and neglect the small details… So we’ll have to focus on tomorrow, because so many things can happen on the way to the chequered flag, with the safety car and so on, as we’ve seen so often in the past. Hopefully we can have the same speed tomorrow, and then it could be a very good day.”

Kimi Raikkonen: “I’m happy to finish third considering the difficult day I’ve had compared to yesterday. I have been struggling all day with the set up of my car, finding the grip and the balance. It was difficult to make the car work as I wanted. We always try to do our best in a race weekend and here it seems to work. Some places seem to favor one team and some others other teams, this time we have been having a pretty ok weekend so far. Our aim is to improve for the race, tomorrow we’ll see how strong our opponents are, we’ll try to do our best and hopefully have a stronger race as a team.”

Red Bull
Daniel Ricciardo: “It’s really nice to be back up here on the front row; it’s been a while and it’s a bit of coincidence that it’s Seb and I together, but it should be a good race. Qualifying was exciting and to have no Mercedes up here is a surprise, so we will definitely try to capitalize on that – it would be nice to be back in the press conference tomorrow! I’m really happy for the team as we have definitely made a load of progress, since Silverstone and particularly since Budapest. Today’s result backs up the confidence I had in the car. We’ll be aiming for the win, as that’s where the points are and the champagne is. Seb put himself out of reach, so we are second best for today and we’ll try and go one better tomorrow. It’s always a challenge here and you need to have confidence in the car, because it’s hot and physical and a test for the driver which makes it fun. I’m happy with the way the weekend has gone so far.”

Daniil Kvyat: “I’m happy with today’s qualifying. I think it’s a good place to start the race tomorrow. Obviously as a driver you always want more but we’ll do our best to get as many points in the race as we can. The red cars are looking strong but we will take the fight to them during the race. It’s a long race and we will have to be patient. The chassis is behaving really well and the team have done a great job with the car.”

Mercedes
Lewis Hamilton: “It is what it is today; I enjoyed it out there but we just didn’t have the pace. We weren’t surprised with the pace of the Ferrari as it was like that the whole weekend. We don’t know the reason why we weren’t as quick today, we obviously didn’t get the tyres switched on like everybody else did, but we need to look into it. We haven’t lost any performance on the car compared to two weeks ago but the guys in front were just too fast today. Tomorrow is going to be hard; it’s difficult to overtake but I’m still excited, I’ll be pushing hard and will do everything I can to make up positions.”

Nico Rosberg: “The pace of the Ferrari is very impressive, starting from P6 is really frustrating. I had no grip in the corners, which was very strange. But there is a lot to play for tomorrow. Firstly I will work on overtaking Lewis, it’s very important for me to finish ahead of him. It seems that the front runners are also much quicker on high fuel from what we have seen on Friday. I tried a few things on the set up, but we didn’t really find out why we are so slow this weekend. It’s strange, until now we were quick on every track. But coming now to Singapore and seeing the difference to the quickest cars, is really not good.”