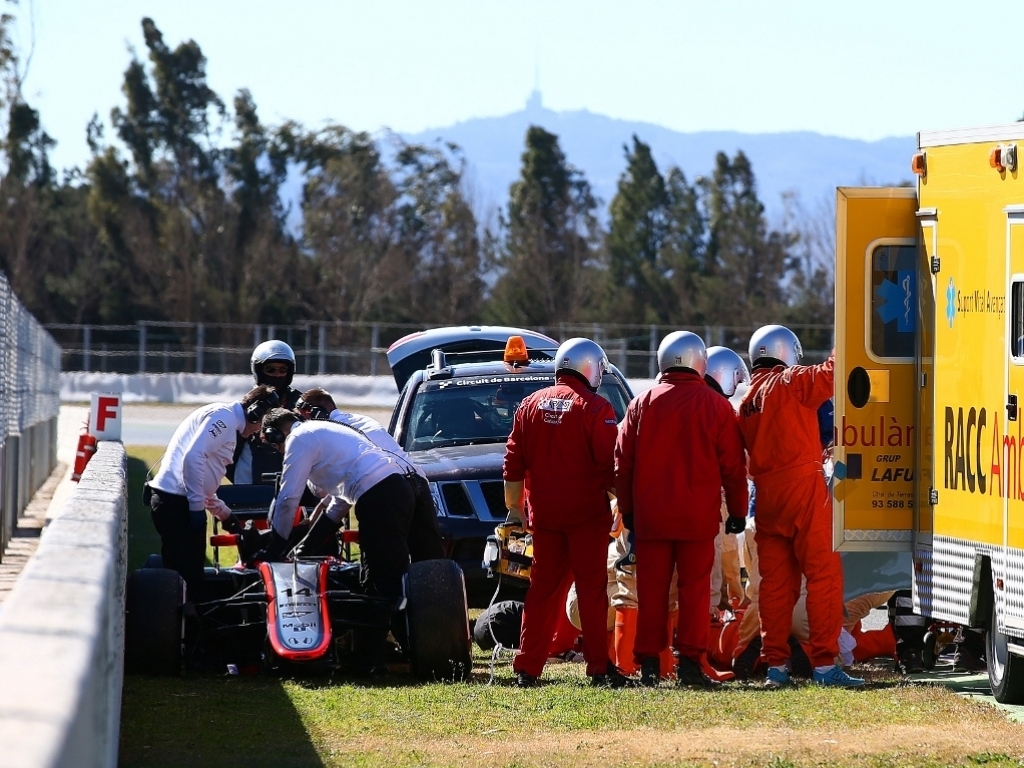 Although Force India progressed to Q2 at Sepang, the team was only quicker than McLaren and Manor…

Force India:
Nico Hulkenberg: "It was a short qualifying session in the end with the rain arriving quite early in Q2. Maybe it would have been better for us if the rain had arrived five minutes earlier and Q2 was completely wet because everybody was able to complete a lap on slicks when the track was quite dry. It was only on the in-lap that the skies really opened. As it happens I think it would have been very difficult to reach Q3 anyway. The race tomorrow will be tough, especially managing the tyres in the high temperatures. There is always the chance of more rain and that’s when you have to adapt quickly because it’s all about being on the right tyre at the right moment. Whatever happens we will try our best to come away with some points."

Sergio Perez: "It was really tough out there in these conditions. I was the last car out on track in Q2 and that compromised my lap on the mediums – our strategy was the right one but we were just a bit late in going out and by the time I got to sectors two and three the track was starting to get wet. All in all, I think where we are is a fair reflection of our current pace. We are hoping to be in a better position than others tomorrow because our focus has been directed towards the race rather than qualifying. We've seen in Melbourne that anything can happen so I will approach the race aiming for points."

McLaren:
Jenson Button: "It was very difficult to get temperature into the tyres during the qualifying session – I really struggled in the first sector on every run I did, but was able to make the car work in the second and third sectors. Before qualifying, I think we’d have hoped to be a bit closer to the cars in front of us, but this weekend has seen us take a massive step forward in performance. Also, I think our race pace – and our consistency over a long run – look like giving us a little extra. I’d like to think we could get closer to some of the cars in front tomorrow; that’ll be something to look forward to. There are a lot of positives to take from this weekend: we’ve made a big step forwards in terms of pace. There’s more to come from the engine and the aero package, but we know what to do."

Fernando Alonso: "Our form today wasn’t unexpected, but I think our performance so far this weekend has maybe been better than I’d have anticipated before arriving here in Malaysia. In fact, I’d say the progress we’ve made since Australia has been fantastic – we’re much closer to the cars in front now – but we’re still under-performing and we still need to improve. However, the steps we’re taking with the car show a lot of progress, so I’m optimistic that I won’t be qualifying in Q1 for that much longer. If it rains tomorrow, it’ll be another learning process for the team. For me, too, the start procedure, the formation lap, the pit-stops – they’ll all be firsts for me as I wasn’t able to practise any of them in Australia. That makes me feel confident that there’s a lot more to come in the next few weeks. This isn’t an ideal position from which to start the race, but I’m fully aware that McLaren-Honda is a long-term project: we want to beat Mercedes, and to do that you need time, and to be prepared to take your chances as they come."

Manor GP:
Roberto Merhi: "We were hoping to make the 107% time today, and that is what we have been pushing for through the weekend. Unfortunately we missed out by 0.4s in the end. In the three sessions Will has shown that the car is thereabouts on pace, while I had a spin in FP3 today so, along with yesterday, I have not been able to achieve the consistent running I wanted to for the team. Coming into this, our first weekend on track, we were aware that we have a lot of hard work to do and that this is just the start. So although we are disappointed for the qualifying result, we have to keep focus on what we have achieved to be here and to be able to begin our development."

Will Stevens: "Obviously I was very disappointed not to take part in qualifying. In FP3 we had a fuel system problem and we were trying to resolve that, but sadly we weren’t able to get on top of it in time for me to take part. Looking at the positives, as we always try to do, the practice sessions showed promise and my times were within the 107% throughout Friday. Step by step we’ll get there."