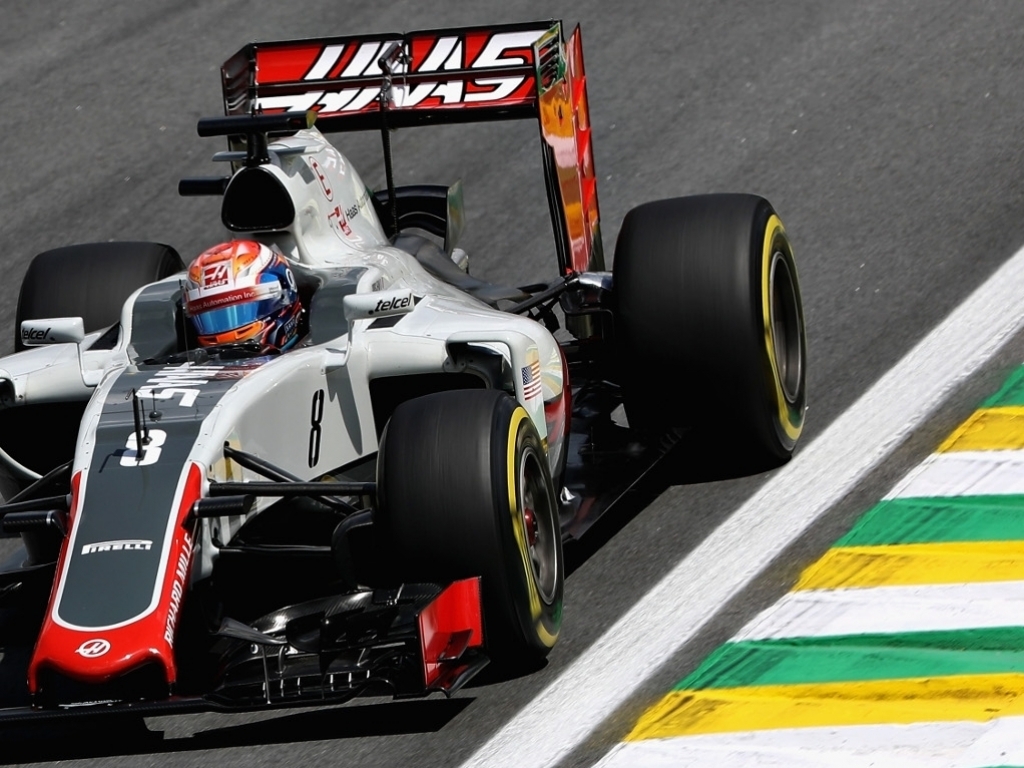 Romain Grosjean did impressively to qualify P7 ahead of the Brazilian Grand Prix, while Jenson Button unfortunately got knocked out in Q1.

Haas:
Romain Grosjean: “It’s good to be back in Q3, especially after the last two races where we were out in Q1 and really struggling. Here we’ve been trying some new brakes, focusing on making them work as well as we could. The feeling was good right from the beginning and the cooler track conditions today really helped us a lot. There are still plenty of margins to improve for the future. We’re always learning more about what we need to do, but we really weren’t expecting to be in Q3 today. Generally though, when we do get things working well together, we’re quite fast, which is encouraging.”

Esteban Gutierrez: “It’s been quite a competitive qualifying session with the lap times being very close. We just missed out on Q3, but it’s great that our performance is back after two weekends where we were struggling. We can now be optimistic for the race tomorrow. I’ll be aiming for the points. We’re aware of what we need to do and that’s what I’ll be targeting.”

Force India:
Nico Hulkenberg: “I’m happy with eighth place and I think it was pretty much the limit today. It was close with Checo just behind me and it means we’re starting the race in a strong position. My laps were pretty clean and tidy, although I didn’t get a great exit out of the final corner at the end of Q3 – it’s been a difficult corner for us all weekend. I think we have a good car for tomorrow, so we need to get the job done and score solid points. The long runs we did yesterday looked promising, but we have to wait and see what happens with the weather. At the moment it looks like conditions will be similar to today – overcast with some light drizzle. If we get some heavier rain, it would certainly spice things up because it can be quite difficult to overtake here in the dry.”

Seergio Perez: “We made a big step forward from practice to qualifying and it was enough to get us through to Q3. The session was a real fight, especially in Q1, and the margins between progression and elimination were tiny. This is a very short track and you need to really hook together the perfect lap, because any mistake can make a big difference. It was very tight with Nico; we were within a few tenths of each other all afternoon, but in the end I fell just short. I made a small mistake in the final corner and it cost me some time, so I could have been a bit quicker. Overall I think we can be happy with the job we did today. We have kept some quick cars behind us and I believe we can be strong in the race. We now need to see what the weather brings tomorrow.”

McLaren:
Fernando Alonso: “I really enjoyed driving today and felt really confident with the car. These cooler conditions seem to suit our package a little better than yesterday’s higher temperatures, and we extracted the maximum from the car. “Still, we were a little bit worried after FP3 as we weren’t completely on the pace, and I was even more worried when I saw Jenson go out in Q1. I just thought, ‘This isn’t going to be our Saturday!’ but – happily – my car behaved fantastically on each of the five Option tyre-sets I used in qualifying. “The car just kept on delivering: I kept finding an extra tenth each time I went out, just finding a little extra at the limit. “I hope the track time I lost yesterday isn’t going to cost me too much in tomorrow’s race, as everybody conducted their long runs in totally different weather conditions. Tomorrow, we’re expecting it to be cooler with the possibility of some rain, so it’s good to be starting in the top 10.”

Jenson Button: “The car was really well balanced yesterday, and I was 10th quickest in FP2; today, it was a completely different car. There’s definitely something not right – there’s no reason why the car should feel like it does; but it’s been like that since this morning. We’re off the pace and it’s frustrating. When the conditions are cooler, you tend to pick up a little more rear grip and stability, and in high-speed the car is so on the nose. Then you destroy the rear tyres for the low-speed corners; you don’t have the grip because the tyres are damaged. Still, it’s done now, and tomorrow’s another day…”

Williams:
Valtteri Bottas: “It’s obviously disappointing to be out before Q3. Our pace all weekend has been very good, as has the set-up; but for some reason in qualifying we were just not quick enough, while some other cars were surprisingly fast. I doubt we got everything out of these cooler conditions today, but the race is tomorrow. It will be a fight with Force India again, but at least now we might have the upper hand with the strategy.”

Felipe Massa: “This definitely wasn’t the greatest result because I expected to easily be fighting in Q3. The car didn’t work in the proper way and the front tyres stopped working. I was suffering from understeer and my best lap of Q2 ended up being my first one, so we need to understand what happened. But it was absolutely amazing to get out of the car and feel the support from the crowd, and to feel the love I have for these people as well as the love they have for me. I’m not happy with the result for them, but I will try everything I can tomorrow to give them a better result, as well as for my team, especially as it’s my last race here in Brazil.”