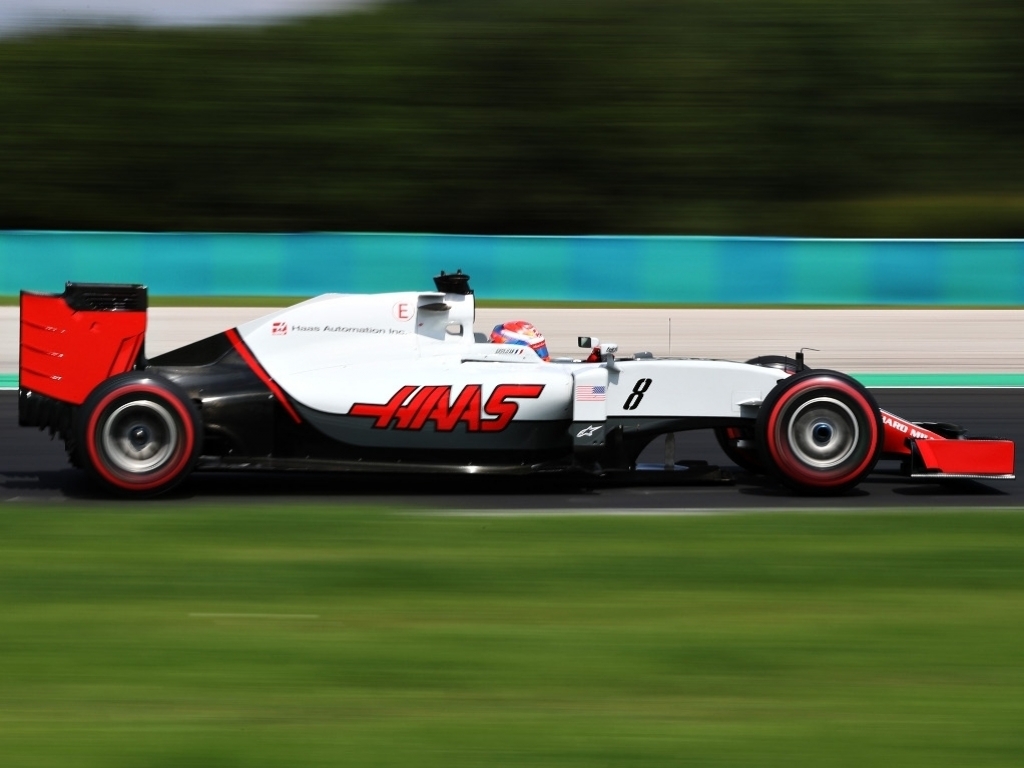 Haas:
Romain Grosjean: “It was close. We were only one-tenth off of Lewis’ P10 time. All things considered, to be that close, it’s a good thing. We successfully made all the right decisions at the right time in qualifying, including tyre choices. It was a very difficult qualifying session, but we showed how much we’ve improved as a team from day one through today. We were perfect today in our execution. We were fast on both the extreme wet and intermediate tyres. We weren’t too bad on slicks. I know that tenth-of-a-second that denied us today is somewhere in there. I’m pretty happy with everything. If it doesn’t rain tomorrow it’s going to be boiling hot, and that always makes for a good race.”

Esteban Gutierrez: “That was one of the trickiest qualifying sessions of the season, with a lot of interruptions. In Q1, we were quite unlucky. I basically only had one clean lap, so it wasn’t an easy one for us. In Q2, I was struggling to find the temperature on the tyres. The conditions out there were difficult. With only one line to take, you’ve no margin for any mistakes. I’m not happy with 15th, but tomorrow I hope to overtake and make my way up the grid. It’s going to make for a very interesting and exciting race, and I’m going to give it my all to try to advance as much as I can.”

Sauber:
Felipe Nasr: “That was an eventful qualifying. We were all surprised that the rain arrived before the session started. I think I extracted the most out of the car today. To be honest, I was happy to see us temporarily in P1 at the end of Q1 in the wet conditions. Unfortunately when the track started to dry and we changed to supersoft tyres, I could not improve my last lap as this run was a bit compromised by traffic. Nevertheless, it was a good qualifying for me, one that I will remember.”

Marcus Ericsson: “It was a very disappointing qualifying for me. The conditions were quite tricky with lots of standing water, but that was the same for everyone. I lost the car, so in the end it was my mistake and the session was quickly over for me. I should have done better. I apologise to the team for the work load I have caused them. I will fight back tomorrow.”

Renault:
Jolyon Palmer: “P10 was great ; unfortunately that came in FP3 not qualifying ! Today has actually been really good with the tenth fastest time this morning in a normal dry session which was a real boost. In the wet, we were at least as good, however unfortunately we weren’t on track at the right time in Q1. I set one lap at the beginning of the session and didn’t have a chance to set another as the red flags came out at the wrong times for us. Slowly but surely our rivals had the luck to get the laps they needed, but the red flags meant I was never able to improve. Whatever the weather tomorrow, I think we will be moving forward which is what we want. It could be a great race.”

Kevin Magnussen: “It was disappointing not getting more out of today as we are looking a little bit stronger this weekend. It was so difficult to see out there because there was so much spray and we weren’t able to be at the front of the queue. It is still a positive weekend in terms of the progress we’ve made and how strong we looked this morning. Tomorrow we have the race and for sure we’ll be aiming to make the very most of it.”

Manor:
Pascal Wehrlein: “Yes, I think it took everyone by surprise – particularly how much rain came down in such a short space of time. The Q1 session had four red flags, which is very unusual and made it difficult for anyone to get into a good rhythm. It also showed how tricky it was out there.

“My time on my final run was a 1:38, same as Kimi in 8th, so I would have been P9 I think. Unfortunately the red flag came out again just 0.8s before I crossed the line, so my time was cancelled. We hadn’t been able to set a timed lap before that, so it’s very frustrating to know we came so close to Q2 today. This track doesn’t seem to suit me very well, so that would have been a great result from such a challenging Q1.”

Rio Haryanto: “I went to the medical centre for the usual precautionary check, because it was quite a big hit of 22g. I’m okay though; I feel fine. I’m just frustrated because it was a tricky Q1 session and I was improving a lot on my final run before I spun off. Well the three red flags prior to that had made for a very challenging Q1; stopping and starting, with the track conditions getting better, then worse again. At the third restart we had a little over 5 minutes remaining, so we had to push hard but the track was still quite damp and I just lost the rear in Turn 10. It’s a shame and there’s quite a lot of damage to the car, so the boys will have a busy night unfortunately.”