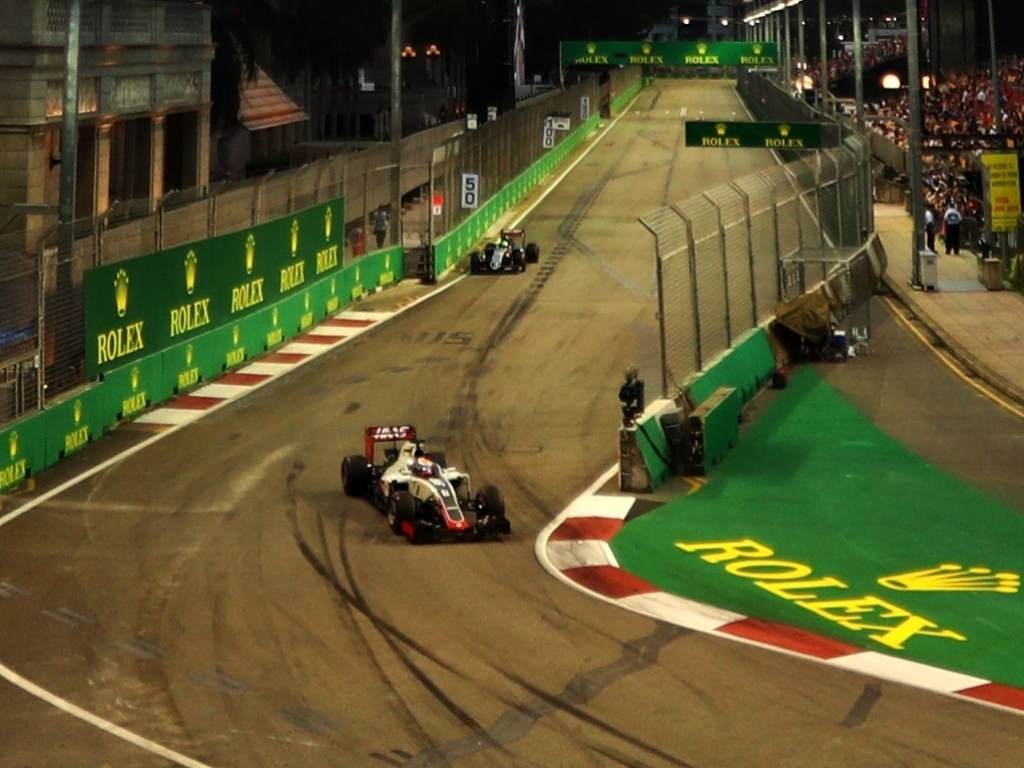 The minnow teams express their thoughts on how their qualifying went for the Singapore Grand Prix while also predict what to expect on Sunday.

Haas:
Esteban Gutierrez: “FP3 was much better in terms of car balance. We used the morning session to evaluate certain things and I think we found a good compromise considering we had an updated aero package. Qualifying was very frustrating. It was a missed opportunity. I was preparing myself for that lap and I believe I would’ve had the opportunity to fight for Q3 if I could’ve completed it. We were really unlucky today. However, I’ll take the feeling I experienced during the first part of the lap into tomorrow for the race.”

Romain Grosjean: “I don’t know what’s going on, to be fair. Yesterday we had issues, we were struggling. I spun the car and crashed yesterday and ended up doing the same again today. That’s not my style of driving, to do that twice in two days. There’s something not quite right, so we really need to analyze what it is. We’ve been trying to resolve the problem. It was qualifying and I was pushing at 200 percent. It’s just been a weird weekend all along.”

Sauber:
Marcus Ericsson: “It is positive that I reached Q2 today. Overall it has been a difficult weekend for me, as I haven’t been able to get a good feeling for the car during the practice sessions. Therefore, it makes it even nicer that we managed to make it into the second qualifying session. It is a good effort, but we need to keep pushing to close the gap to the midfield.”

Felipe Nasr: “It was a disappointing qualifying for me. I was surprised by the drop of performance in qualifying, as I felt comfortable in the car during the free practice sessions. We went in the right direction in regards to the car’s balance. Then in qualifying I struggled with the rear grip on my first try; on the second set of tyres I felt that my tyre temperatures were not in the right working window. Anything can happen here in Singapore, so we keep fighting.”

Renault:
Kevin Magnussen: “We were hoping to be more competitive this weekend but it didn’t come together in qualifying. I hope that our race pace will be better as it usually is, so let’s see. It’s a race that tends to have quite a few safety cars, that shows that a lot of things can happen here and we just need to be there to pick up any points that may come our way.”

Jolyon Palmer: “Qualifying was looking to be going okay ; on my final lap I was picking up pace however I pushed the tyres too hard – overheating the rears with a big slide – so the performance fell off a cliff, meaning that I was nowhere in the second half of that lap. If I hadn’t overheated the tyres there was definitely a good few tenths of pace in the offing. Let’s see what we can do tomorrow.”

Manor:
Pascal Wehrlein: “Difficult day. This is a track where you need a lot of downforce and good traction. We don’t have enough of either yet, so we were expecting a tough weekend. Sure enough, it has been a tough weekend. This morning I lost much of the session, but as we were struggling before, it hasn’t compromised us so much. It’s a track that isn’t suited to us, but it’s also a track where things can happen in the race. So that’s what we’re focusing on now – being there when it counts. It’s a spectacular event here, racing under the lights, so I will try to enjoy it.”

Esteban Ocon: “It wasn’t a great day for me. We need to investigate the problems we have as we are quite a way off where we need to be. I don’t think more was possible here today with the car we have. It’s been a tough weekend so far but this wasn’t a surprise to us. Tomorrow is another day. Fresh opportunities maybe. There will be a few different strategies at play and it’s a street circuit, which always throws up a few surprises. I love the track and feel very comfortable here, so I’ll keep pushing and see where we can try to make a difference.”