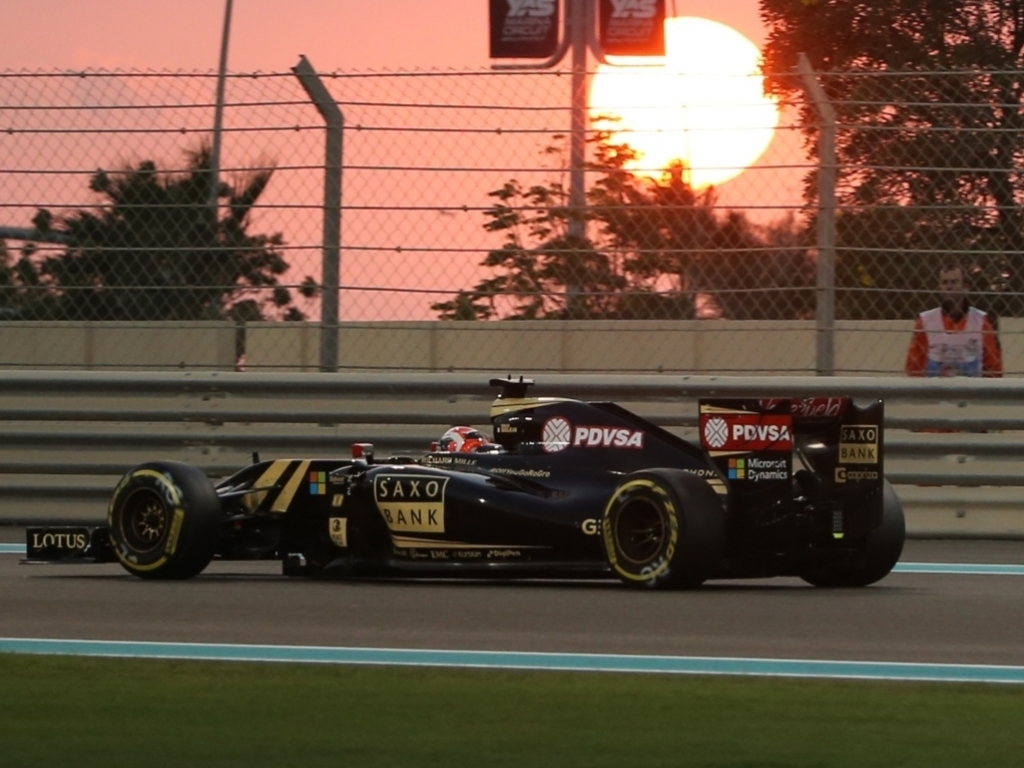 Jenson Button was a bright spot for McLaren as he made it into Q2, but Romain Grosjean had problems on his last Lotus qualifying outing.

McLaren
Jenson Button: “We changed the set-up overnight and everything really worked well. In fact, the car feels the best it has all year, which is always promising at the end of a long season. My lap in Q1 was good; it was good in Q2 too, but I think the others got their laps together and put us in our place, which was 12th. So it’s disappointing to end up outside the top 10, particularly as we felt we had a fighting chance of getting through to Q3 for the first time this year. However, I didn’t leave anything on the table and definitely maximised everything I had; I just couldn’t find the grip on that final run in Q2. The race will be more difficult than qualifying, but we’ll see what we can do tomorrow.”

Fernando Alonso: “Our car has performed better in every session than we initially anticipated. So it was cruel luck to get a puncture at possibly the most critical point of the whole weekend; the final run of Q1. That was unfortunate, because we’d been looking very competitive, and our car seems to be performing quite well around here. The race will be difficult owing to our straight-line speed deficit, but I’ll be aiming to make a good start, run a good strategy, and make up some positions. We’ll see what we can do tomorrow.”

Lotus
Pastor Maldonado: “We expected a difficult qualifying session so P13 is not so bad. You need a lot of downforce around here and that’s an area where we’re a bit lacking, especially at this time of the season. It’s the final race of the year tomorrow so we’ll do everything we can to get a decent result.”

Romain Grosjean: “That was very frustrating, but it’s the end of the season and I think my gearbox has been around the world about three times already! I’ll be doing everything I can tomorrow; I’ve asked the engine guys to turn it up to eleven so let’s see what we can do!”

Sauber
Felipe Nasr: “I think we made a good improvement compared to the practice sessions. Of course, this starting position is not ideal, but I am still satisfied with the changes we made to the car between yesterday and today. I was able to put a good lap together in Q1. In Q2 I then made a small mistake on my second lap into Turn 1, which cost me some time. Overall, I felt a difference between the tyres in Q1 and Q2, so I want to understand why we lost a bit of performance in Q2. For tomorrow, the objective is to keep the eighth position in the constructors’ championship as well as holding onto 13th in the drivers’ championship for me. I will do everything I can to achieve that.”

Marcus Ericsson: “It’s been a difficult weekend for me. We have been struggling to find a balance for the car that I feel comfortable with. For qualifying I felt we were going in the right direction. With the first set of supersoft tyres in Q1 I made a mistake on my second lap. After that, on the next run I was not able to improve, as we seemed to have issues, so I had to abort the run at the end when the track was in its best condition. Overall, the result is for sure disappointing, but I think we made a step forward in terms of the car’s performance. This is positive for the race, and I will do my best to fight back.”

Manor
Will Stevens: “I’m really happy with my qualifying today. Looking at the weekend so far, this has been one of my strongest races all season. As soon as I got here I felt really comfortable with the car and it’s nice to be at a track where I’ve had previous F1 experience. I’m very excited about tomorrow now; the pace is going to be good and I’m really hoping to end the season on a high. I think we’re pretty on top of it to be honest.”

Roberto Merhi: “A disappointing qualifying for me, I flat spotted my tyre on my quick lap, as I haven’t had the confidence in my brakes all weekend. I was also blocked on my other lap, so overall not a great qualifying for me. It’s a shame, as this is the final race, but I will look forward to tomorrow now and the opportunities it may bring.”