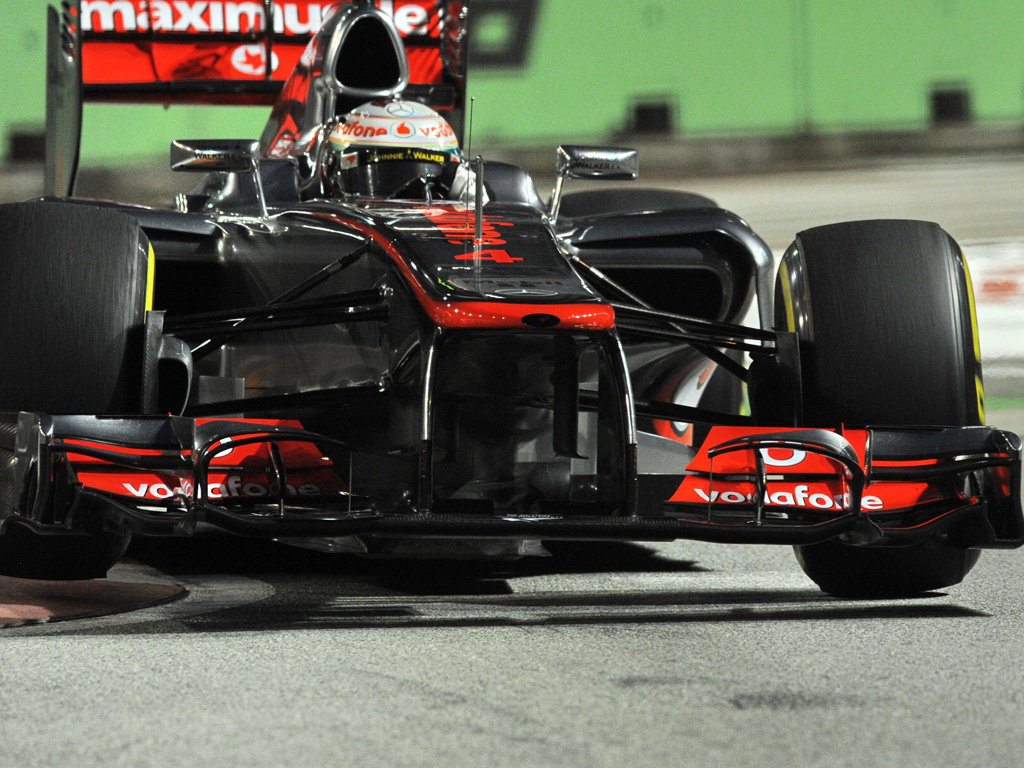 McLaren:
Lewis Hamilton: “I’m very happy with pole position. It’s been a good weekend so far, but there are no points for today, and it’s going to be a long, tough race, so I still need to be cautious. I hope we’ve done the work we need to do to put us in a strong position for tomorrow – the key will just be to stay out of trouble and look after the tyres. Our guys at the factory have done an incredible job to bring our upgrades to the track this weekend. In previous years, we’ve often been playing catch-up on development throughout the season, but, this year, we’re right there. I’ve always believed that if we could start the season strongly, we’d be able to pull ahead. We’ve been there or thereabouts all season, but now I think we’re starting to see the real strength of my team pull through.”

Jenson Button: “I found it a bit tough today; I didn’t really feel comfortable with my car, the rear went away from me quite quickly, and I struggled to look after the tyres over a lap. I hope the balance will be better in the race than it was in qualifying. The high degradation around here will make it a tricky race, but I think we’ll be okay. It’s going to be tough for everyone on Sunday evening, but you can overtake around here. Starting from fourth means you can hope for the best – a win – but the pace just wasn’t quite there for me in qualifying. I hope it’s better in the race.”

Williams:
Pastor Maldonado: “We’ve been working really hard as at the beginning of the weekend we were struggling for pace. We continued improving throughout qualifying and we found a good balance in the car. I then had to put together a good lap in Q3 and I knew we could be right up at the front. I’m really looking forward to the race as we’ve shown consistently good pace on our longer runs throughout practice. We have all the tools to be competitive tomorrow, so it should be a good race for us.”

Bruno Senna: “It wasn’t ideal today. I was pushing very hard to get a good lap but I pushed a little over the edge. This place isn’t very forgiving so we broke the rear suspension. Unfortunately that brought an early end to qualifying but we now we need to focus on tomorrow. We have extra sets of new tyres now which I think everyone is going to need. We have a good car and it’s a long race. It isn’t easy to overtake here but we’ve raced from the back before. I’m going to need to push really hard to get some points out the race tomorrow.”

Red Bull:
Sebastian Vettel: “It’s hard to say what happened. I was happy until the end of Q2, but then in Q3 we weren’t able to go with the track and improve. In Q3 I couldn’t feel the grip so well and convert it to the lap time. The most important day is tomorrow and we have got pace in the car. We have been competitive this weekend and our target is to have a good race tomorrow; P3 is still a good place to start from.”

Mark Webber: “We expected to be higher than that. It was a tricky session and on every run the car felt a bit different. We didn’t have the rear-grip that we had in the other sessions; normally the super soft tyres give us a certain balance, but it was difficult to chase it in that session. It’s disappointing to be seventh, but it’s a long race tomorrow and we have a chance to get something from it.”

Ferrari:
Fernando Alonso: “Today, pole position was absolutely out of our grasp: Hamilton was on another planet… We must settle for this fifth place but that doesn’t mean we are not hoping to improve on it tomorrow: our target is the podium. The result pretty much matches what we expected after yesterday, given that right from the afternoon we were not particularly brilliant. The only surprise this evening was Maldonaldo and it was really unexpected to see him on the front row. Here, the performance difference between the two compounds is probably the highest of the whole championship; between one and a half and two seconds, which could be an important factor tomorrow also. It’s true the Softs can last longer but it’s also true that, with such a significant difference, the Supersofts could also be an interesting option. I expect a lot of pit stops, specifically because of the tyre degradation. Honestly, before arriving in Singapore, I expected more, but we soon realised we would be tackling this Grand Prix on the defensive. The race will be very long, very hard physically and mentally, because you need to always concentrate to the maximum, with no margin for error: the slightest mistake can carry a high price on a track where the barriers are very close. Reliability will be very important and the number one priority will be getting to the finish in the best possible position.”

Felipe Massa: “It was a very difficult qualifying. I really struggled to put together a good lap, suffering particularly in the final sector, where the rear tyres were sliding and, as a result, were degrading. It’s a problem I’ve had since yesterday and we did not manage to fix it. Let’s hope we can do something for the race, otherwise it will be really hard. We must look carefully at the strategy, starting with which tyre to use for the start of the race: there’s a lot of difference in speed between the two compounds, but both seem to degrade significantly. The aim will be to finish the race in the points, which definitely won’t be easy, but we’ll give it our best shot. Not all the updates we brought here worked as we had expected and hoped for, which certainly hasn’t helped. So we must understand why with a view to the rest of the season.”